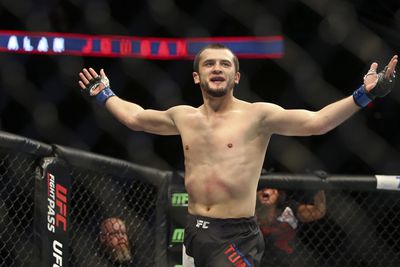 And when the dust settled, it was Tumenov who did just enough to earn a very close split decision victory.

Larkin started the action with a low kick, and then another, as Tumenov attempted to catch it and follow it with a hard straight right hand that came up just a bit short. Larkin tried it again and this time Tumenov did not miss, landing a nice hard shot. Tumenov attempted a high kick, which Larkin caught, but was unable to do anything with. Two minutes in Tumenov exploded with a flurry along the fence that sent Larkin backward in a panic. In the scramble Tumenov landed a nice kick, too, but Larkin was able to escape danger even though he did get tagged with several shots.

Larkin continued to paint Tumenov’s lead leg and it appeared to cause discomfort, but the Russian made him pay with hard counter strikes upstairs as the first frame came to a conclusion.

Both fighters touched gloves to start the second as Tumenov attempted to walk his way in with jabs, while Larkin beat him back with the low kick. Tumenov attempted to trap Larkin in the corner but the former Strikeforce standout was able to punch himself out of trouble. Tumenov landed a nice uppercut that appeared to stun Larkin, who went right back to punishing his lead leg.

Larkin began to throw more punches, but Tumenov responded with hard strikes along the fence, including two crushing body blows that Larkin was somehow able to shake off. Tumenov followed them up with more ….View full article