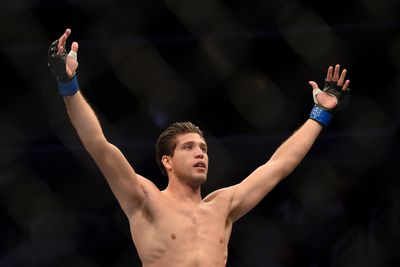 And the Brazilian jiu-jitsu blackbelt was more than prepared.

Brandao got the action started with a serious leg kick that actually sent him falling backward. He followed it up with several wild strikes, forcing Ortega back to the cage and then dumping over his head and onto the ground. Ortega actually landed an armbar on the way down, which made Brandao abandon his attack.

Brandao poured on the intense pressure, eventually getting Ortega back down to the mat where he defended well off his back. So well, in fact, that Brandao let him get back to his feet, where the pair traded hard right hands. Ortega uncorked a high kick and Brandao made him pay with a right-left combination. Ortega worked his jab well in the final minute as Brandao responded with his patented wild strikes.

The round ended in a flurry as it appeared Ortega began to settle in, weathering Brandao’s early storm.

Brandao came out for the second stanza pumping his fists and raising his hands, hoping to bait Ortega into a wild brawl. Ortega remained calm, pumped his jab before getting tagged with a nice looping right hand. Brandao appeared less energetic, but he was able to land a very nice cross off another unsuccessful Ortega head kick. Ortega ripped the body and then came upstairs, but Brandao didn’t even budge.

Ortega continued to circle and land calculated shots, but Brandao would catch him with something seemingly every time he burst with a flurry. It was a close round, with Brandao landing the more significant shots, ….View full article