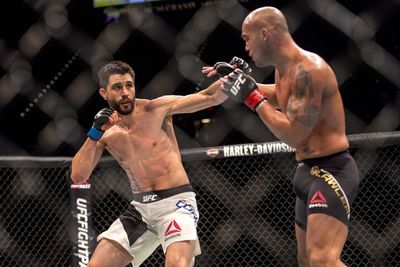 Wow. That was without a doubt one of the greatest fights of all time.

Where exactly does it rank? Who gives a shit! It was one of the greatest fights you will ever see in mixed martial arts (MMA) … period. It was an incredible experience and I’m going to get to all of that soon but first I have to say one thing that needs to be said.

MMA judging is officially ruining the sport that I love. It is broken, it is bankrupt, it is a veritable fucking mess.

Four split decisions at UFC 195 last night (Jan. 2, 2016), each with serious ramifications for the careers of those who were on the wrong side of the scorecard being written by people sitting cageside, presumably with crayons wedged so far up their noses they’ve hit brain.

According to MMAdecisions.com, the judges botched four of the seven fights on this card that required “professionals” to judge their merits. I’m just going to read them out here, followed by the scores of the MMA media:

I guess you could argue that media were somewhat split on the Tanaka vs. Soto fight. But, what the fuck were they thinking for any of the others? I mean, the Morono vs. Noke fight wasn’t even remotely close.

I’m not being melodramatic when I say that judging is literally ruining lives and careers and losing fans in this sport.