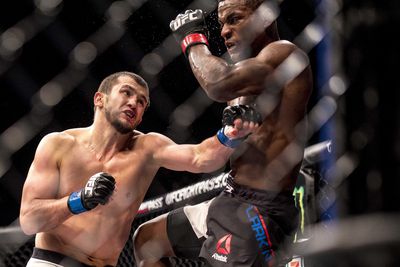 Since dropping to 170 pounds, Larkin has looked like an entirely different fighter. He finished both of his opponents prior to this bout in quick fashion, and Larkin was working towards a similar result here.

On the other hand, Tumenov has proved his violent efficacy in his last four fights, ripping through his opponents without much issue. Just 25 years old, Tumenov had an opportunity to prove himself a major player in the Welterweight division.

He did just that.

Larkin opened the bout by looking for low kicks, but Tumenov was hunting for counters. When Larkin was allowed to land his low kicks, he was rather effective. However, Tumenov was throwing and landing some vicious combinations whenever he managed to close the distance.

At one point, Tumenov swarmed his opponent with an impressive and effective combo. Larkin kept his composure and returned to his low kick-heavy game plan, which was doing damage to the Russian’s lead leg.

All in all, it was a fairly close round, as both men had their moments.

At about the midway point in the round, the Russian did pick up some momentum with a series of nasty ….View full article