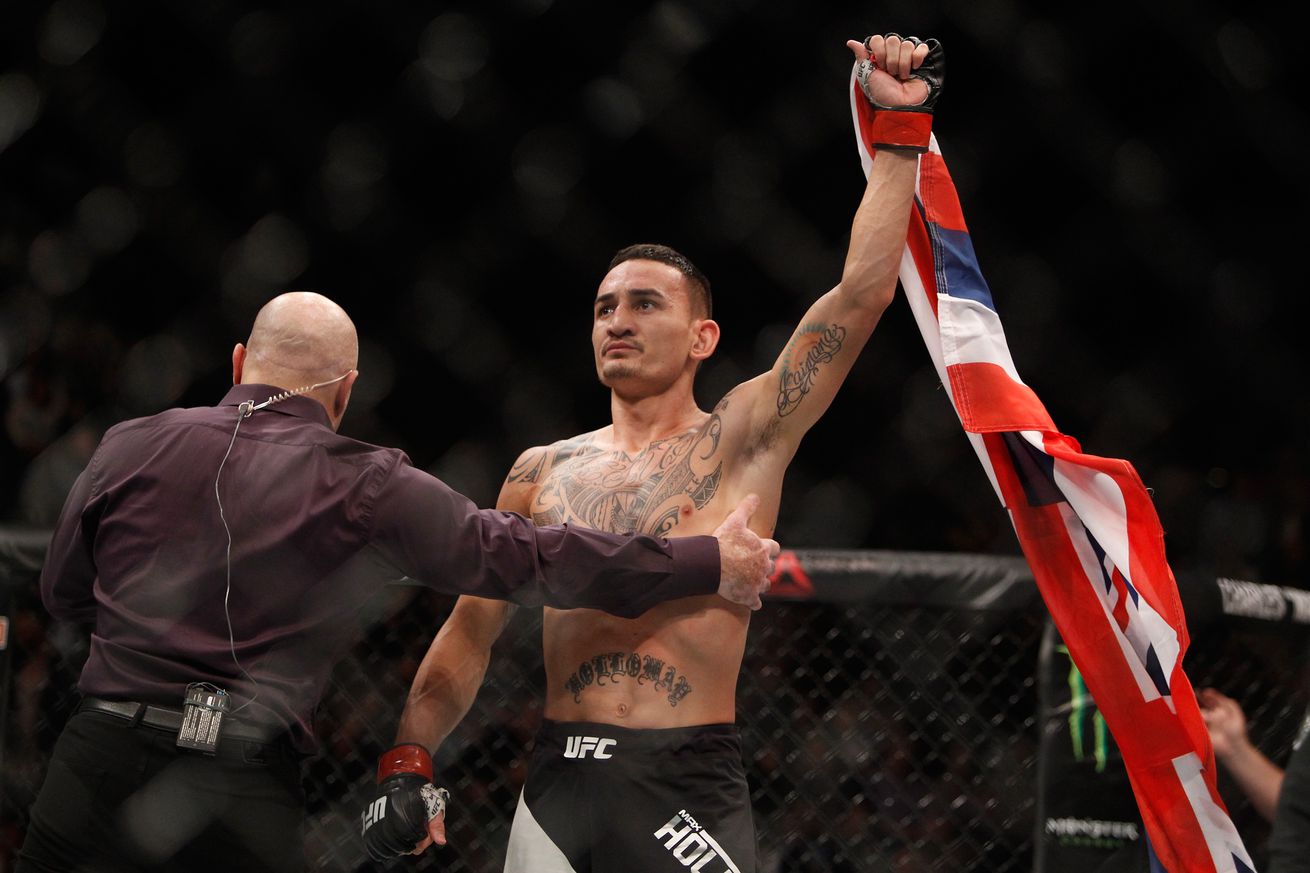 Nostradumbass is off in Europe for a while; not sure exactly what he’s up to, but he mentioned something about “getting revenge against those who imprisoned him all those years ago,” so it sounds like he’ll have a good time. That means it’s up to me to be your Pythia, hallucinatory fumes and all.

Three years ago, Max Holloway broke his foot against Conor McGregor and still managed to take the Irishman the distance for the first time in his career. Since then, he’s won nine straight and looked more or less unstoppable in the process. It’s not like he’s been fighting chumps; either; he ran over Cub Swanson, Jeremy Stephens, and Ricardo Lamas without losing a round.

Pettis, meanwhile, just managed to break a crushing freefall by outlasting Charles Oliveira. He’s in the odd position where his technique and athleticism are still intact but people have figured him out. He simply can’t seem to deal with properly-applied pressure, an issue that dropping to featherweight won’t fix.

What the drop did do was put a dent in his cardio, an enormous red flag when going up against a relentless volume puncher with a gas tank for days.

Holloway’s momentum is overwhelming and I’m simply not convinced Pettis can make the necessary adjustments to his style in time to halt it. He overwhelms “Showtime” on the feet, perhaps mixing in a few takedowns, on his way to the interim title and a showdown with Joe Aldo.

That’s the long and short of it. “Cowboy” has looked utterly monstrous since moving to welterweight, knocking out two of the division’s most ludicrously durable fighters in Patrick Cote and Rick Story with utter ease. More tellingly, Story presented the sort of brutal pressure Cerrone has struggled with before and still couldn’t do a thing against him.

Brown is 1-4 in his last five and is coming off the first TKO loss of his career, a fight in which he was dropped with a head strike for the first time. His brittle body is a beautiful target for Cerrone’s intercepting knee and neither his wrestling nor his submission defense are any match for Cerrone’s vaunted grappling.

Whether “Cowboy” wants to take the easy way out and submit Brown or make a statement by stopping him on the feet, there’s really not much “The Immortal” can do to stop him. Cerrone by beating.

I like to think I’ve put my Asian MMA obsession behind me, but it’s hard not to get excited about Choi. “Superboy” hits crazy hard, has solid defensive grappling, and has demonstrated incredible grit in the past.

He’s also got eight straight knockouts and eleven overall in his last twelve fights, so that’s a plus.

While Swanson is still game and still dangerous, it’s Choi’s time. Cub is thirty-three and has a whole mess of debilitating wars under his belt. He’s going up against one of the division’s biggest punchers and I’m just not sure he can avoid that right hand for long enough to bring his veteran savvy to bear.

A Swanson win wouldn’t surprise me terribly, especially if he can land some of those counter throws he does so well, but his willingness to trade is going to bury him here. We get a few minutes of quality back-and-forth action before the lights go out in Toronto.

Even with a nearly thirty-month layoff, I picked Kennedy over Rashad Evans; even had a whole breakdown post on it before those darn doctors interfered and rendered my work useless. I don’t have quite the same hopes for him against Gastelum.

For all the well-deserved grief he gets over his weight issues, Gastelum is a very, very good fighter whose only losses are split decisions to the current welterweight champion and the current number-seven fighter in the division. He’s quick and active on the feet, while his scrambling prowess matches up well against Kennedy’s wrestle-heavy offense.

In a vacuum, this is a close fight that narrowly favors Kennedy. With two years’ worth of rust, I can’t pick the Ranger against a master of attrition. Gastelum outworks him for the mild upset.

If you’ve never heard of Meek, here’s his highlight reel, courtesy of Caposa.

Yep, that’s about it.

Meek is in the UFC entirely because he obliterated Rousimar Palhares. Outside of that, he’s an entertaining and powerful but ultimately unproven striker. Mein has his issues, namely his defensive grappling and the fact that he’s been out of the cage since two January’s ago, but he’s a technical and powerful boxer with extensive world-level experience.

In short, not someone to debut against if you want to start your UFC career on the right foot.

Though Meek hits hard enough to be a live dog, everything else is in Mein’s favor. Expect him to make a statement with an early knockout.

MMAmania.com will deliver LIVE round-by-round, blow-by-blow coverage of the entire UFC 206 fight card TONIGHT (click here), starting with the Fight Pass “Prelims” matches online, which are scheduled to begin at 6:30 p.m. ET, and then the remaining undercard balance on FOX Sports 1 at 8 p.m. ET, before the PPV main card start time at 10 p.m. ET.

For UFC 206 “Prelims” preview and predictions click here. Odds and best bets for “Holloway vs. Pettis” can be found here.

You’ve heard my picks, now let’s hear yours. Who gets it done tonight in Toronto?