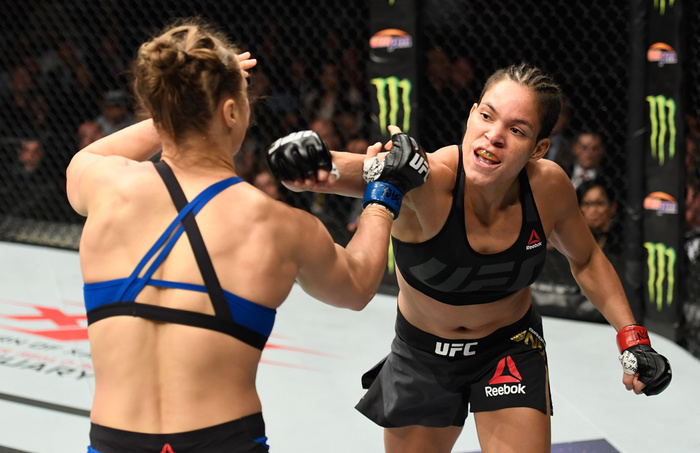 Nunes Blasts Rousey Out in 48 Seconds

Herb Dean quickly jumped between the returning Ronda Rousey and defending champion Amanda Nunes after 48 seconds of the UFC 207 main event. The Brazilian marched forward from the first bell and connected with several right hands that put the former champion on wobbly legs, before Dean saw it fit to stop the action.

Rousey’s media blackout in the lead up to the event shrouded her return in mystery. As she stood in the middle of the Octagon with her head slung low as the decision was blasted around the T-Mobile Arena, you couldn’t help but sympathize with the woman who brought the female sport to the world’s biggest stage.

Speaking after her stunning display, Nunes urged the fans to “forget about Ronda”, and instead focus on the other emerging talent that exists in the division.

Rousey offered little or nothing to stop the onslaught of the ATT fighter who bore down on her and quickly found her range with her powerful right hand. Each time the shot landed, Rousey was visibly stunned and after eating a handful of shots against the cage, she slumped for an instant against the fence, only to be met by another right from Nunez.

After suffering two dramatic stoppages in a row, it’s hard to see whether the pull to compete will still be there for Rousey. The former champion suffered quite badly after her first loss last November to Holly Holm and we can only hope that she has an easier time with dealing with her second defeat at the hands of Nunes.

Cody Garbrandt put on a dazzling display in the co-main event, ending his team’s losing streak to Dominick Cruz with a dominant display that saw him crowned UFC bantamweight champion of the world.

After the champion making such a point of saying he couldn’t get hit, Garbrandt was counting out loud as he connected with hooks and blocked takedowns. On several occasions Garbrandt mocked the movement of Cruz as he made his unique entries into exchanges.

The challenger took the time to mark each slip, punch and kick with a gesture, and after landing the more solid connections he took the first round easily.

After eating an overhand, Cruz clipped Garbrandt, momentarily putting him on one knee at the start of the second. Although the Team Alpha Male man landed some big connections of his own he began to look noticeably slower than he did in the first round. Cruz marked the end of the round with a takedown, before throwing a big combination at Garbrandt

A clash of heads opened up Cruz’s eyebrow at the beginning of the third round before Garbrandt took back the momentum. The jeering returned as Cruz missed shots, and the young challenger made the champion pay with big looping shots on several occasions.

The fourth round was Garbrandt’s most dominant as he sent the champion down on three occasions with two overhand rights and one left hook. Cruz’s ability to recover after being knocked down was surprising, but unfortunately, that was all he could take from a round that was dominated by Garbrandt.

Cruz upped his output in the final round, but it was all too late. Garbrandt knew he had the fight won and didn’t commit in the same way he had over the first four rounds.

The surge came too late from John Lineker in his bantamweight showdown with former champion TJ Dillashaw. The Brazilian came on strong at the end of the third with a hammering assault to Dillashaw’s body, but the Elevation fighter laughed off the connections and raised his hands in victory as the final bell rang.

Dillashaw’s footwork was magnificent, and Lineker’s inability to shut his movement down was clear from the opening exchanges. The former champion mixed his striking and wrestling seamlessly, which allowed him to control Lineker with ease.

Lineker began to have some success at the opening of the second round, but as soon as Dillashaw felt in danger he was under the Brazilian in the blink of an eye and quickly taking him down.

Dillashaw rained down elbows and punches from half guard. Although Lineker couldn’t seem to move, he scoffed at Dillashaw’s shots by smiling and putting his head forward to meet the oncoming elbows. The goading pushed Dillashaw into another gear and he looked very close to finishing the fight with his grounded attacks before the round ended.

Dillashaw insisted that the public would know UFC was “rigged” if he wasn’t given the next title shot during his post-fight interview with Joe Rogan. After Cruz narrowly beating him to take the title in January, Dillashaw believes he has been overlooked for a rematch with the champion.

A lot of people thought Tarec Saffiedine had done enough to take the win at the end of his main card clash with Dong Hyun Kim, but surprisingly the Korean took the victory via split decision.

Kim aggressively pressed Saffiedine throughout the clash, but the European welterweight seemed to be able to pick him apart as he bounded in. Despite the judo credentials of Kim, Saffiedine showcased some of his own skills with a trip early on.

Boos sounded around the arena at the end of the second round despite Kim’s relentless pursuit of his opponent, but the effort of the round was evident when he returned for the final five minutes.

Saffiedine picked his shots nicely at the beginning of the round, but gave Kim an opportunity to take control after a failed takedown attempt. Despite his usual ability to control his counterparts in top position, Saffiedine slipped out from under ‘Stun Gun’ to get the fight back to the striking realm.

Despite reporting a broken ankle to his corner in between the second and third round of his main card opener against Louis Smolka, Ray Borg look completely dominant on route to a unanimous decision over the Hawaiian.

The 23-year-old showed blistering speed in the scrambles in all three rounds, which he constantly used to take the back of Smolka. Although Smolka always looked to escape, Borg reacted well with slick transitions to re-establish control.

Smolka tried to isolate Borg’s leg for a submission in the second round only to be met with a thudding left hand that shook the canvas. Borg came very close to finishing the fight in the third round with an arm triangle, but regardless of how soundly he had been beaten up until the point Smolka showed great heart to continue to fight and finish out the three rounds.

Despite him missing weight for the flyweight clash, Borg told Joe Rogan that he still saw his future in the UFC’s lightest weight category.