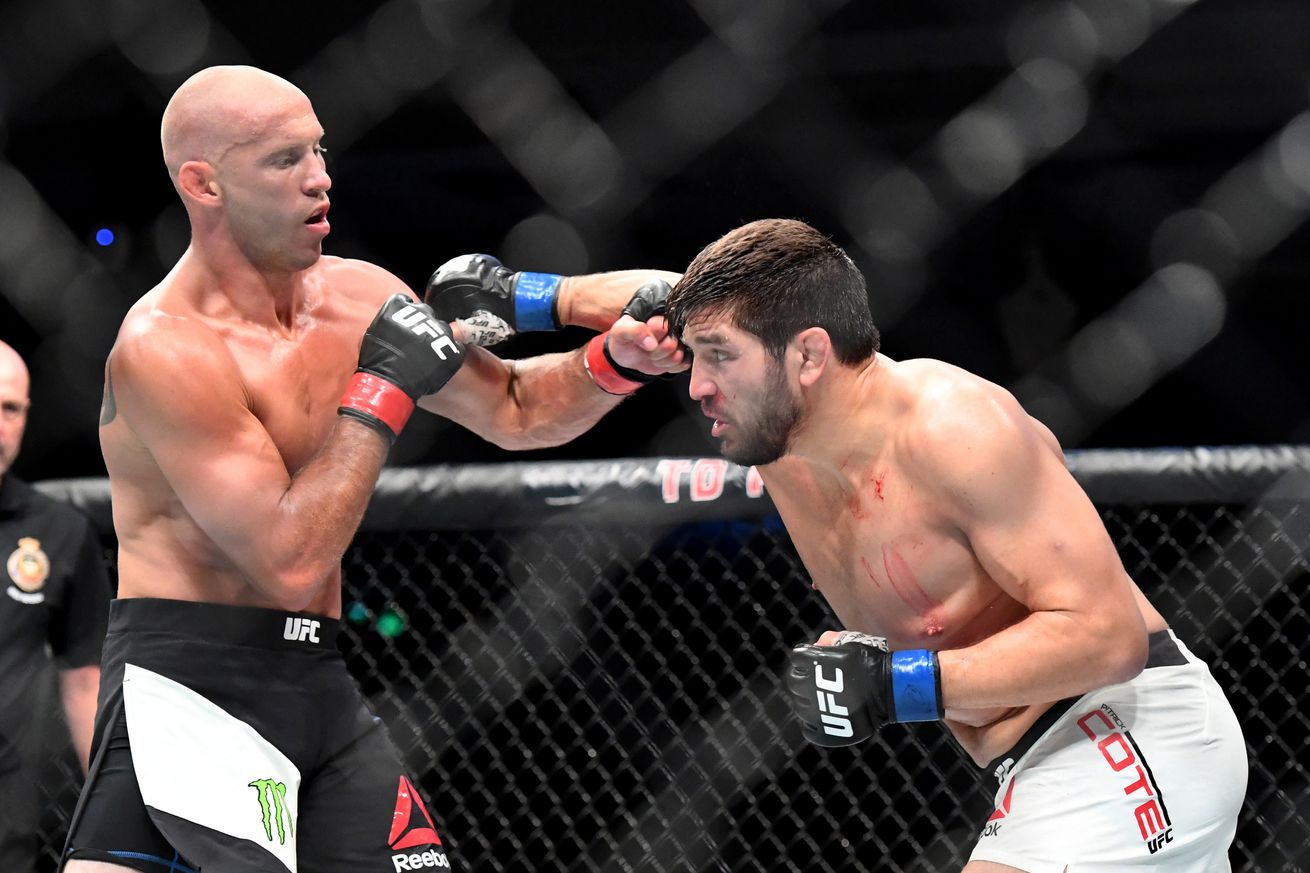 Back in 2013, Cote dropped down to Welterweight for the first time, and it really revitalized his career. While Donald Cerrone may have stomped out any title aspirations in Cote’s last appearance, he still has only lost to Top 5-ranked contenders at 170 pounds. Cote wasn’t on a major losing streak or anything so dramatic, but the former title challenger nevertheless attempted to switch things up by heading to Lightweight. It was disastrous, as Alves missed weight badly and performed pretty poorly. Luckily, he’s headed back to his home weight class for this match up.

Let’s take a look at the keys to victory for each man:

Patrick Cote
Record: 23-10
Key Wins: Ben Saunders (UFC Fight Night 81), Josh Burkman (UFC Fight Night 74), Kyle Noke (TUF: “Nations” Finale)
Key Losses: Donald Cerrone (UFC Fight Night 89), Stephen Thomson (UFC 178)
Keys to Victory: Cote is a long-time veteran of the sport who has fought at both Light Heavyweight and Middleweight in the past. He’s always been known as a striker and still relies on those skills, but Cote has also made use of a solid wrestling game since dropping down to 170 pounds.

In this bout, mixing it up will be vital for Cote. Both men pack power in their hands and have some solid technique, but Alves is the more dangerous man … at least on paper. Luckily for Cote, Alves seems to be showing the wear of his long career more than the Canadian. Compared to his prime form, his timing is a bit off, he’s less of a physical threat, and Alves has never been great in exhausting fights.

If Cote can gets his hands going and mix in shots, he can replicate Jim Miller’s recent success. Plus, since Alves spent the better part of a year preparing for a Lightweight fight, meaning that Cote should have a decent size advantage.

At 33 years of age, the Brazilian is a 16-year professional veteran.

In this bout, Alves should look to compete inside the pocket. In Cote’s last match, Cerrone used hard kicks on the outside to motivate Cote to move forward, but the Canadian only found counter punches when he attempted to box.

Alves can attempt to match that gameplan. At range, his low kicks are still nasty. Plus, Cote will probably be looking to shoot, which will require him to get in close. At that distance, Alves slips and counters well, which historically is the way to find Cote’s chin.

Cote has moved into the role of Welterweight gatekeeper quite well. He’s both well-rounded and in solid shape, which makes him a perfect test for a potential weakness in skill or gas tank. In this bout, Cote is not testing some dangerous whippersnapper — he’s helping us figure out just how much Alves has left in the tank.

Win or lose, Cote’s position is pretty much the same.

As for Alves, things are very much up in the air. He doesn’t have any bad losses at 170 pounds, but none of his wins are particularly relevant in 2017. With that in mind, his immediate future very much depends on this performance. If Alves picks apart and dominates Cote, he’s likely in for a ranked opponent next. A competitive win will earn him another veteran match up, which is also a good result for the Brazilian. In the worst case scenario that he comes up short, Alves’ UFC run may be coming to an end, as three straight losses could lead to a release or retirement.

At UFC 201, Patrick Cote and Thiago Alves will throw down. Which man will leave the cage with the victory?