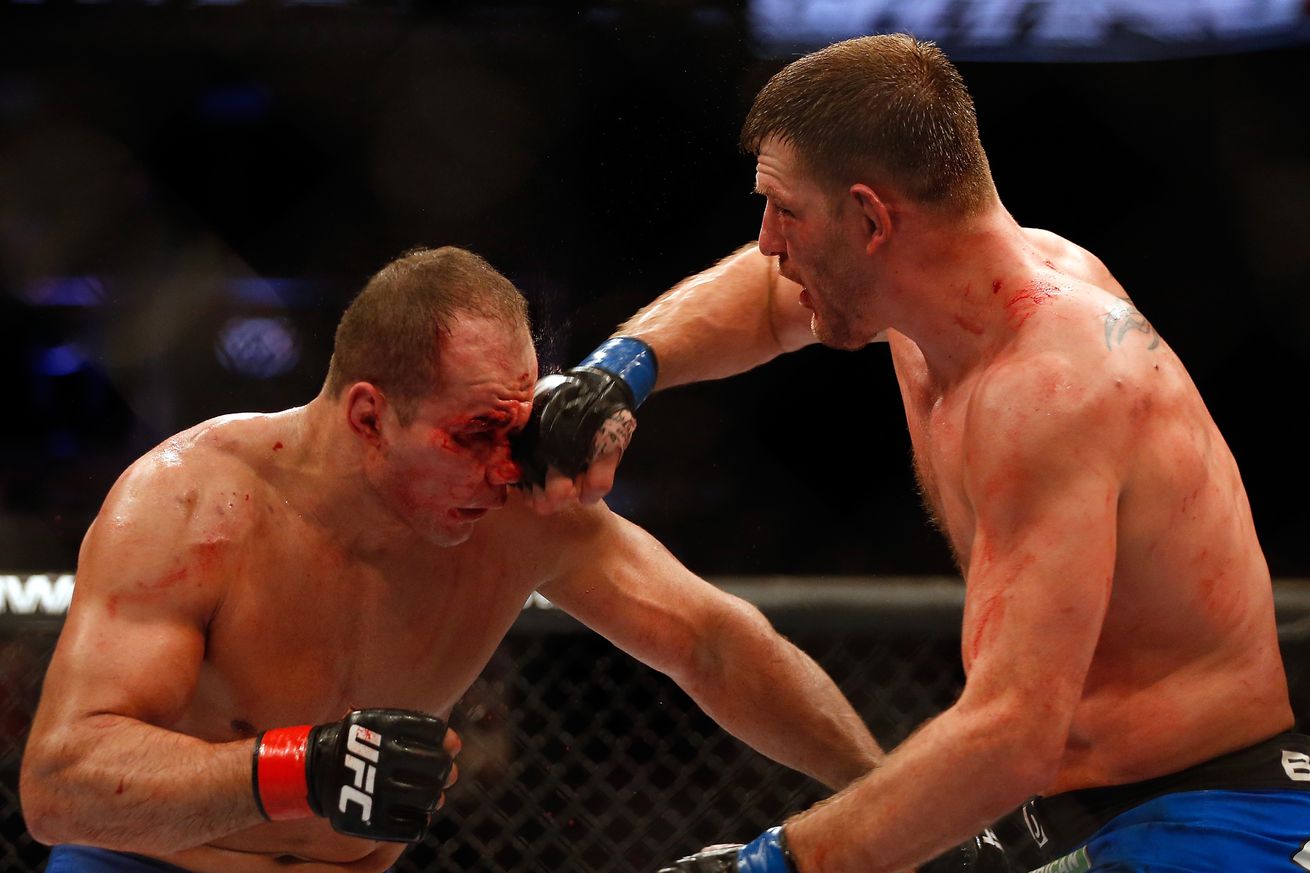 Miocic had a pretty perfect 2016 — in which three straight first round knockouts earned him the strap and a title defense — and he was looking to keep the ball rolling last night. Opposite the last man to defeat him, Miocic pushed for a different result. Meanwhile, “JDS” had a huge opportunity on his hands to recapture the belt he lost a few years back. Dos Santos looked great in his last performance, but he would need a similarly strong showing here in order to dethrone the current kingpin.

Miocic made his pressure game plan clearly early, but this time he wasn’t looking to wrestle all that much. Instead, he came in throwing combinations, looking to trap his foe along the fence and drop bombs.

Dos Santos was doing a decent job of circling, and he landed a few seriously hard right low kicks. They immediately did damage, but Miocic pushed through and consistently managed to drop dos Santos along the fence. Eventually, his punches began to connect, and one big right hand sent “JDS” to the mat.

He didn’t get back up.

With this win, Stipe Miocic extends his first round knockout streak to four, including a trio of championship fights. In just about a year, Miocic has moved from talented up-and-comer to one of the best Heavyweights ever.

It’s been really nice to have an active Heavyweight champ.

Miocic capitalized on dos Santos’ flaws wonderfully. Instead of wasting his energy on takedowns early, Miocic used that superior cage position to batter his opponent. Dos Santos is tough, but Miocic is proving to be one of the heaviest hitters around, and the Brazilian simply could not outlast the early combinations.

For Miocic’s next title defense, he’ll likely face the winner of Alistair Overeem and Fabricio Werdum. There’s always the chance that Cain Velasquez makes a miraculous recovery, but it’s hard to be too confident about that.

As for “JDS,” this was really an exploitation of a longtime flaw. Dos Santos has always been hittable along the fence, and it’s worn him down. In the past, he’s been able to absorb those shots and potentially rally.

At this stage in his career, he simply melted.

Nevertheless, dos Santos remains a top contender. If he can put a couple wins together, another title shot is not impossible. Unless he can improve upon this flaw, however, retaking the belt seems unlikely.

Last night, Stipe Miocic knocked out another top foe within a round. Who should Miocic face next?