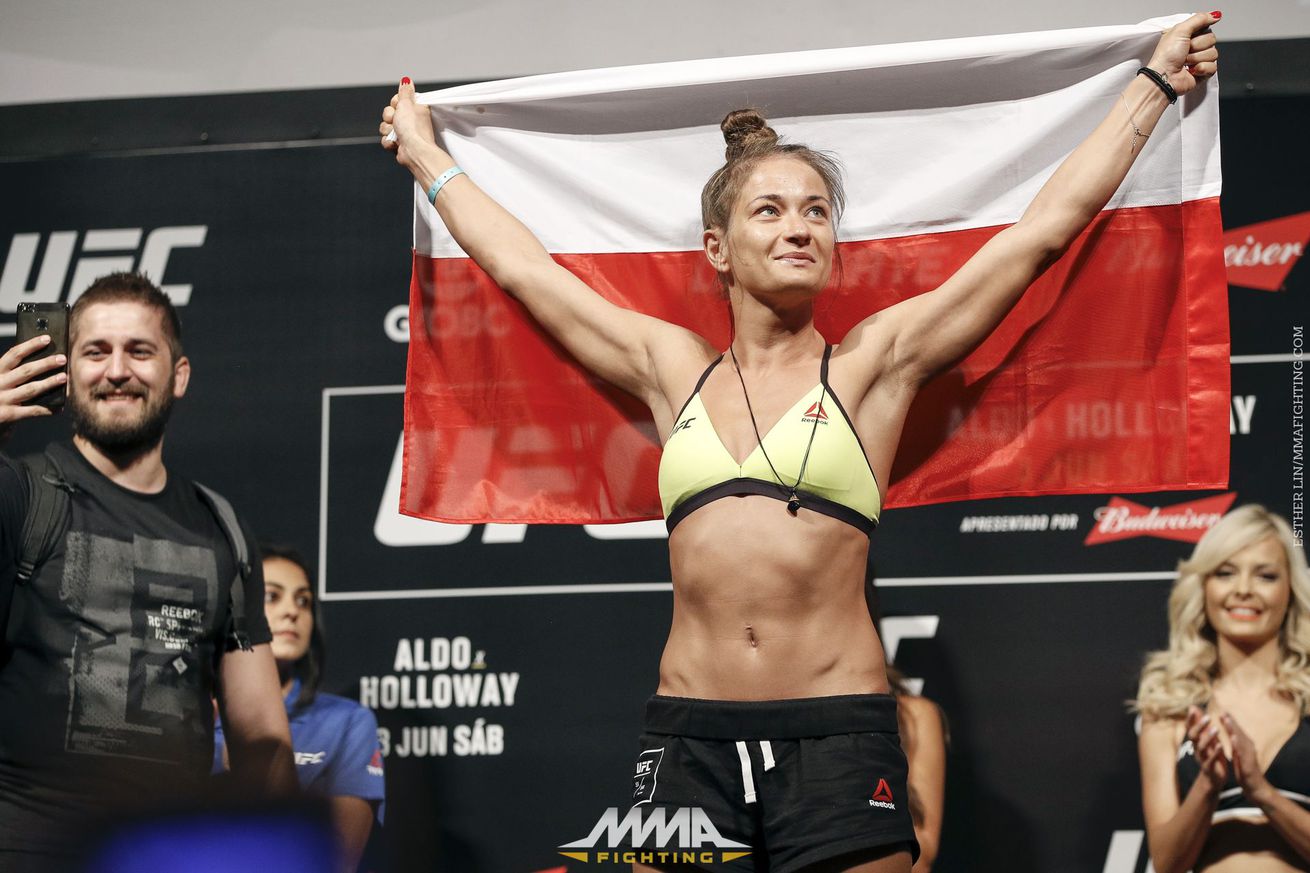 Here we go with another UFC pay-per-view event, and it’s a good one. UFC 212 is headlined by an intriguing featherweight title unification bout between champion Jose Aldo and interim champ Max Holloway. Additionally, this card also features a pivotal fight for the women’s strawweight division in Claudia Gadelha vs. Karolina Kowalkiewicz, a middleweight contest between veterans Vitor Belfort and Nate Marquardt, and the promotional debut of former bantamweight WSOF champion Marlon Moraes.

Featherweights Jose Aldo and Max Holloway will be fighting in the main event of UFC 212 to unify the 145-pound title.

The legitimacy of this championship bout has been questioned by fans, as both fighters were last defeated by Conor McGregor, who never lost the title and was stripped of the belt by the UFC. But let’s face it, McGregor is long gone from featherweight, and Aldo vs. Holloway is a fantastic matchup that features world-class fighting.

Aldo has long been the king of the featherweight division, and he’s been regarded as one of the best pound-for-pound fighters in the world for many years now. The 30-year-old has only fought three times in the past three years, and some have wondered if Aldo has slowed down. Meanwhile, in almost the same amount of time, the young Holloway has impressively racked up 10 straight wins in the UFC, and has shown incredible improvement every time he steps in the Octagon. The 25-year-old Hawaiian is considered by many to be the future of the featherweight division. But to become that, Holloway must dethrone the champ Aldo.

So let’s take a look at what makes this fight so compelling, and the factors that could possibly determine the outcome:

Aggressiveness and volume vs. counter striking and power: Here’s the deal, both Aldo and Holloway are primarily strikers, and they’re both elite in their own way. So how do they match up? Well, Holloway has blazed through his opposition through the use of volume and aggressiveness. Holloway is not really a knockout artist, but he’ll find his range and then make sure to pour it on until his opponents cave. For every punch you throw, Holloway will throw two or three. The Hawaiian puts together great, smooth combinations, and makes sure he’s the putting on the pressure, pushing the pace of the fight. On the other hand, you’ve got Aldo, a striker who is content sitting back letting his opponents lead the dance, while he uses his amazing head movement to avoid damage and counter back with a powerful shot. Aldo doesn’t throw in volume, but what he does throw, he makes it count, often putting his opponents to sleep.

So will Aldo be able to move out of the way of Holloway’s attacks and counter strike to win the stand up battle? Or will Holloway overwhelm and outstrike the champ? Who knows.

Good ol’ wrestling: I don’t think Holloway will be able to take Aldo down. Holloway is the taller man, and it’ll be really difficult to change levels and hit a takedown on Aldo, who’s got the lower base. And from the clinch, Aldo is the stronger grappler, which will make Holloway’s task to trip or throw the champ a lot harder. Oh, and let’s not forget, Aldo probably has the best takedown defense in the world, period. His hip movement and balance are ridiculous. Ask Edgar. So what about Aldo taking down Holloway? That’s possible. After all, Holloway’s three losses have come to guys who have wrestled him: Dustin Poirier, McGregor, Dennis Bermudez. Sure, Holloway has improved a lot since, but Aldo can pull off takedowns when needed. He did it against Ricardo Lamas, Korean Zombie, and Mark Hominick.

Prediction: Aldo has been there and done that. The man is an expert at winning championship bouts, he’s been doing it for forever. Although I think Holloway has come a long way, I still feel he’s inexperienced compared to Aldo. This is no knock on Holloway, he’s a great fighter who will likely be champion in the future, but I just think Aldo is too crafty to lose a decision. If Aldo is going to lose a fight, while he’s still in his prime, it’ll be a flash knockout like the McGregor fight, and Holloway is not that guy. Aldo is too tough, too experienced, and too skilled to not be able to find a way to stay on top on the score card.

Important fight for the strawweight division, as No. 1 contender Claudia Gadelha takes on No. 2 Karolina Kowalkiewicz.

Kowalkiewicz is coming off a loss to the champion Joanna Jedrzejczyk back at UFC 205 in November, a that loss marked her first professional defeat. Much like the champ, Kowalkiewicz is a very quick striker who can put together effective combinations. Kowalkiewicz has great movement on her feet and excellent cardio, which enhances her fighting style. On the ground, the Polish fighter is proficient and even has some submissions.

Gadelha, on the other hand, is a very different fighter. The Brazilian is a good striker with powerful overhands. Although a solid striker, Gadelha shines best on the ground, as she’s a jiu-jitsu black belt with great takedowns and top control. Gadelha is likely to be the most powerful fighter in the strawweight division, and she utilizes that advantage in her takedowns, ground control, and striking.

This is a very interesting fight. I think most people believe either Kowalkiewicz uses her speed to put on a striking clinic on Gadelha – much like Jedrzejczyk did at the TUF 23 Finale – or Gadelha uses her size to outgrapple Kowalkiewicz. Although I think both trains of thought are valid, I’m more confident on the latter option. Randa Markos had a lot of success wrestling Kowalkiewicz and I find Gadelha to be a better grappler than Markos. Lack of cardio has been a detriment to Gadelha in the past, but the Brazilian looked in great shape throughout fight week, and at weigh-ins Gadelha made weight with ease (she even weighed in with sweat pants). Gadelha has leaned down and lost some of her bulk, she seems more fit to fight at 115 pounds. Plus, this is only a three-round affair.

This fight is a nightmare to pick because anything can happen here. Both fighters have knockout power, but they also have very questionable chins.

Vitor Belfort, a legend in the sport of MMA, is currently on the very last legs of his career. Belfort has extensively talked about retirement this year and stepping down in competition level with his idea of a legends division. Belfort is no longer the mighty fighter that he once was; he’s been stopped four times in his past five fights. Belfort still has quick hands and good power behind his punches. His takedown defense is subpar and his ground game is basically non-existent. Still, Belfort’s striking technique, power and speed make him a dangerous fighter, at least for the very early portion of the fight.

Meanwhile, the same could be said for Nate Marquardt’s career, but perhaps to a lesser degree, as the 38-year-old is 2-2 in his past four fights. But to be fair, Belfort has faced a much higher level of opposition than Marquardt. “Nate The Great” doesn’t really shine anywhere, but doesn’t have any major holes like Belfort. The American is well-rounded, decent almost anywhere the fight goes, and has a better fight IQ than the Brazilian.

As mentioned at the top of this breakdown, both Belfort and Marquardt don’t have a good ability to take a punch anymore. However, their inability to take a shot differs, as Belfort is usually OK until his cardio fails on him, which is usually a round or a round and a half into the fight, while Marquardt can go out at any given time, but doesn’t really experience a drop like Belfort as the fight progresses. I think this bout comes down to whether or not Marquardt can get past the first round with Belfort. If he can, Belfort’s chances of winning the fight will significantly drop, favoring Marquardt.

This fight is a toss up, and anything can happen. Belfort can stop Marquardt in the first or Marquardt can outlast Belfort and get a stoppage midway through the fight. Tough fight to predict, but I think Marquardt pulls of a dramatic win. I think.

Here’s a fight that will probably end with a knockout.

It seems the UFC is invested in Brazil’s Paulo Borrachinha, and rightfully so. The 26-year-old is getting a slot in the pay-per-view card despite having fought for the UFC only once and being relatively unknown. Borrachinha is undefeated in his fighting career with all wins being first-round finishes, mostly KO/TKOs with the exception of one submission win. The Brazilian looked like a straight up brawler in his UFC debut – and he is to a certain degree – but looking at his previous fights, Borrachinha can pace himself and plan his shots. The undefeated prospect is quick, has an insane amount of power, strikes well, and mixes things up with punches to the body and kicks to the legs. Defensively, Borrachinha is also good, as he has a good habit of keeping his hands close to his chin.

On the other hand, his opponent, Oluwale Bamgbose, is somewhat similar to Borrachinha. Bamgbose might not possess the same quickness or power of the Brazilian, but he’s not so far behind. Bamgbose has a fighting record of 6-2 with all wins coming by first-round KO/TKO. The New Yorker has an unorthodox striking style that can throw off opponents.

Anything can happen in this fight considering these two guys have proven time after time that they can stop a fight at any given time. Yet, I think Borrachinha will get a win here. To start, Borrachinha is fighting in his home country which never hurts. But on top of that, Borrachinha seem to be the better athlete and the more technical striker.

I like this fight a lot, I think it’s a bout that makes sense for both fighters.

Yancy Medeiros, a fighter who made his name fighting in the UFC’s 155-pound division, recently moved up to welterweight where he successfully made his debut by picking up a submission win over Sean Spencer last September. Medeiros is a tough, scrappy Hawaiian who is fairly well-rounded, and always game. The 29-year-old has good boxing, a solid ground game, and good pace to his attacks.

Meanwhile, Erick Silva, who was once a hot prospect in the 170-pound division, has lost some steam in recent years and to be quite frank, has been quite disappointing, failing to live up to his hype. Regardless, the Brazilian has proven to be crafty and can dig deep for a victory, as shown in his last bout against the powerful Luan Chagas. Much like Medeiros, Silva is a proficient striker and can also find success in the grappling department.

Skill wise, I think these two fighters are at a close level. The only difference here is that Medeiros feels fresh and seems to have significantly less mileage than Silva. Medeiros appears to be getting better and seems to be at a good place in his career, while the 32-year-old Silva has been on a downfall and hasn’t really shown any indication of comeback. I’m not saying Silva can’t turn things around, but I doubt he does that against Medeiros. I see this being an entertaining bout until Silva’s fading chin falls to Medeiros power.