Home MMA News UFC 214 Aftermath: Jon Jones just might end up the hero after all
ShareTweet 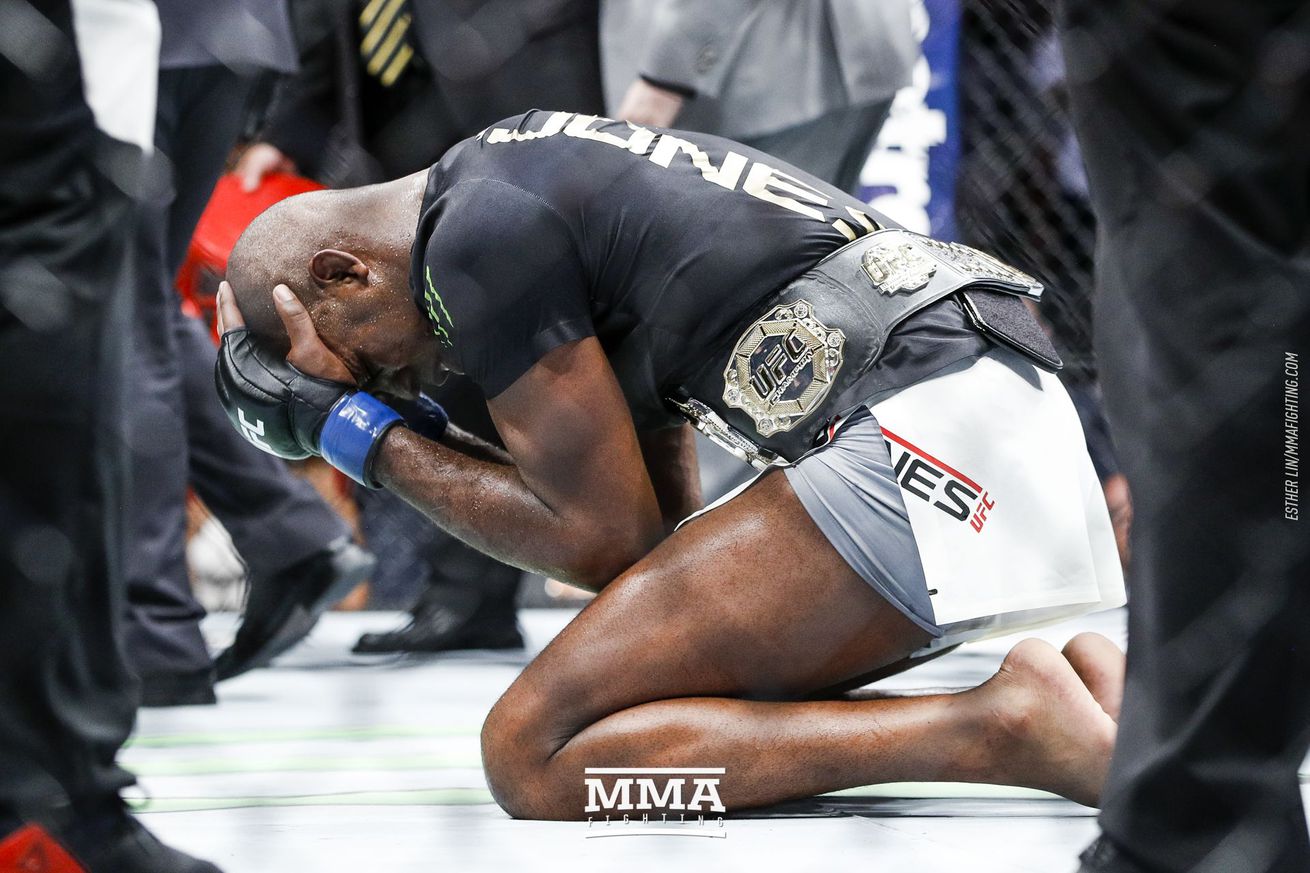 Those wishes imploded in an ugly way over the past several years, in a well-documented string of troubles that we’re not going to review item-by-item. You know them by now.

Suffice to say that in addition to his legal woes, Jones was stripped of his UFC light heavyweight title, and was mocked, ridiculed, and shunned until it finally sank in that the world didn’t love him. Jones retreated to a small circle of trusted friends, family, and teammates.

But a funny thing happened since Jones decided he no longer needed to be the fans’ hero: In doing so, he may have laid the groundwork to become their favorite after all.

Jones was loose and playful all week leading up to his much-anticipated rematch with Daniel Cormier on Saturday night in the main event of UFC 214. He skipped the “workout” part of his open workout and instead spent a half-hour signing autographs and taking pictures with fans.

He smiled throughout his walkout and fight introduction Saturday night, appearing loose and genuinely enjoying his return.

Then he went out, and in the flash of a perfectly placed, wicked head kicked, reminded the world why he was already being talked of as potentially the greatest mixed martial artist of all-time before everything fell apart.

But the most telling moments came after the fight. Here is where the younger Jon Jones would have gloated. Here’s where he would have praised himself in over-the-top terms. 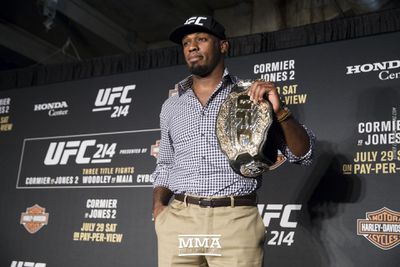 Esther Lin photo
Jon Jones poses with the belt he wore from 2011-15 and now possesses again.

Instead, after Jones once again had the belt he previously wore for four years around his waist, there was dignity, grace, and respect.

Jones shed tears over what he’d been through. He thanked both his fans and those who threw him shade. He had nothing but kind words for Cormier, the man with whom he had traded words outside the cage as viciously as they traded strikes inside.

And then there was the Brock Lesnar callout. All of a sudden, that elusive superfight, the level he’s never quite reached with anyone but Cormier as his foe, is within grasp.

“I’m just more grateful than ever,” Jones said at the post-fight press conference. “At one point in my career I took it all for granted. … Now after not having it and realizing how easily it can all be done and not having this [touching the belt] I’m more grateful for every ounce of this process.”

Maybe he doesn’t want to be the fans’ role model any more. But if there’s one thing people enjoy more than seeing someone get knocked off their pedestal, it’s watching the redemption story afterwards.

If he keeps the same attitude he displayed on Saturday night, Jon Jones just might end up getting that thing he so badly wanted, after he stopped trying too hard to get it.

“I always felt like he’s a pretty classy guy. A standup champion, a model champion. … What happened happened, but he should be respected and I don’t think it should ever be questioned whether he was a true champion in my absence.” — Jones on Cormier at the post-fight press conference

“If you get booed out of the arena, that’s not good. That’s not how you make your money. If people don’t want to watch you, that’s a bad sign.” — Dana White, on fan reaction to the Tyron Woodley-Demian Maia welterweight title fight

“If you lose both fights there’s not a rivalry. So I don’t know.” — Cormier in the Octagon after his loss to Jones

Hold: Tyron Woodley So here’s the trap Woodley finds himself in. The welterweight champion executed a flawless game plan against Maia. He did exactly what he needed to do against a world-class grappler. He completely shut down Maia’s opportunities to get anywhere near a position in which he could gain a submission. That’s all well and good. But while you can intellectualize his approach as the right thing to do, and even admire his handiwork in doing so, you can’t make the fans love it. And those gathered at Honda Center sure didn’t. We’ve quite seen a crowd turn on a fight like they did the fifth round of Woodley-Maia, as the went from doing the wave to lighting up the arena with their cell phones to chanting “This is boring.” This is on the heels of an equally poorly received Woodley-Stephen Thompson rematch at UFC 209. And while, sure, smart tactical fighting will help Woodley keep the belt as long as possible and make base-level championship pay, it’s also a style that is going to keep him from being the sort of draw who brings in the biggest bucks.

Down: Cormier. We don’t mean to be harsh, here, or kick one of the most thoroughly decent people ever to compete in this sport while he’s down. But there’s little disputing what the impact of UFC 214’s result will mean for Cormier’s legacy. Take Jones out of the equation, and, against everyone else, Cormier has been on one of the most remarkable runs in MMA history, a 19-0 romp through both the heavyweight and light heavyweight divisions. With a win over Jones last night, one that seemed in his grasp, Cormier would have been a trilogy victory away from staking his claim on the very short list of the greatest fighters of all-time. Instead, after losing in such a violent manner to Jones, Cormier is now essentially the light heavyweight equivalent of Antonio Rodrigo Nogueira to Fedor Emelianenko: A great fighter, a champion, but one who was the clear-cut second best to the greatest fighter ever in his division.

Up: Cris Cyborg Cyborg has raised expectations so high that anything short of a quick and utter mauling of her opponent can lead to a letdown among fans. But that was a patient and mature approach Cyborg displayed on Saturday night against Tonya Evinger. Those who have kept up with the WMMA beyond the UFC already knew Evinger is one of the toughest pound-for-pound fighters alive, as she ate shots which would have crumpled other fighters before finally falling in the third round. The Cyborg who finally added her long-awaited UFC title to laurels which also include the Strikeforce and invicta crowns is the most complete version we’ve ever seen. 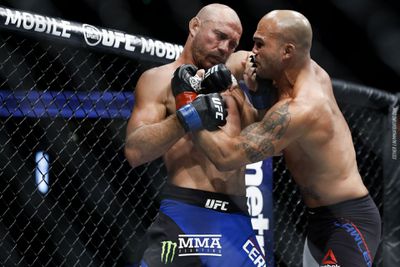 Up: Robbie Lawler After Lawler was knocked out by Woodley last summer to lose the welterweight belt at UFC 201, the whispers were out there. There was no way possible, it was said, that Lawler could return to the top, at age 35, after the run he had been through over the past several years. Grueling efforts in Fights of the Year three straight years had to take their toll, right? And yet that was vintage “Ruthless” Robbie Lawler on Saturday night, turning up the heat in the last round and getting the edge on a game adversary in Donald Cerrone. Not only would a Woodley-Lawler rematch be something Lawler deserves, but it might shake Woodley out of his shell, too.

Up: A whole slew of fighters. UFC 214 lived up to the hype, the first card of 2017 that we’ll name check among the great ones years down the road. So here’s a quick bunch of shoutouts to Calvin Kattar, who subbed for Doo Ho Choi on two weeks’ notice and scored an impressive win over Andre Fili in his UFC debut; Ricardo Lamas, who put a rising young buck in his place with a first-round finish of Jason Knight; Volkan Oezdemir, who is the first legitimate light heavyweight contender in about a million years after his quick knockout of Jimi Manuwa; Brian Ortega, who went toe-to-toe with Renato Moicano for two rounds, then finished him in the third with a guillotine; and Alexandra Albu who won her UFC debut with a fantastic win in a back-and-forth fight over Kailin Curran.

The judges got the fights which went the distance right. There were a couple stoppages which were a touch on the late-ish side (Cormier, Knight), but nothing egregious. July was the best month for avoiding officiating and judging controversies we’ve had in awhile. So let’s knock on wood and hope this carries over into August.

And finally, fair play to Joe Rogan, who went online Sunday morning and made what was clearly a heartfelt apology for his awkward post-fight interview with Cormier on Sunday night. We’ve criticized Rogan in this space before when it’s seemed he’s crossed the line, but it’s refreshing with all the insanity we’ve seen in our culture in 2017 to see a public figure man up and own a mistake.

Fight I’d like to see next: Jon Jones vs. Volkan Oezmedir and Brock Lesnar

Okay, not both at once. But if we take a quick look at the lay of the land, taking on what looks like his top contender and then coming back to face Brock Lesnar might be Jones’ best path.

It’s going to take Brock Lesnar a while to be in position to fight for real any time soon, given he’s got six months frozen on his USADA suspension, which won’t be unfrozen until he re-enters the testing pool. and he’s very likely angling for a big payday at WrestleMania next spring before he can get serious about an MMA training camp.

So a fight between Jones and Oezdemir in the meantime makes sense. The UFC badly needs another monster fight. Next summer’s International Fight Week needs some pizzazz to make up for last month’s dud. Jones vs. Lesnar just might be so wrong that it’s right, and the timing might make next summer the right time.