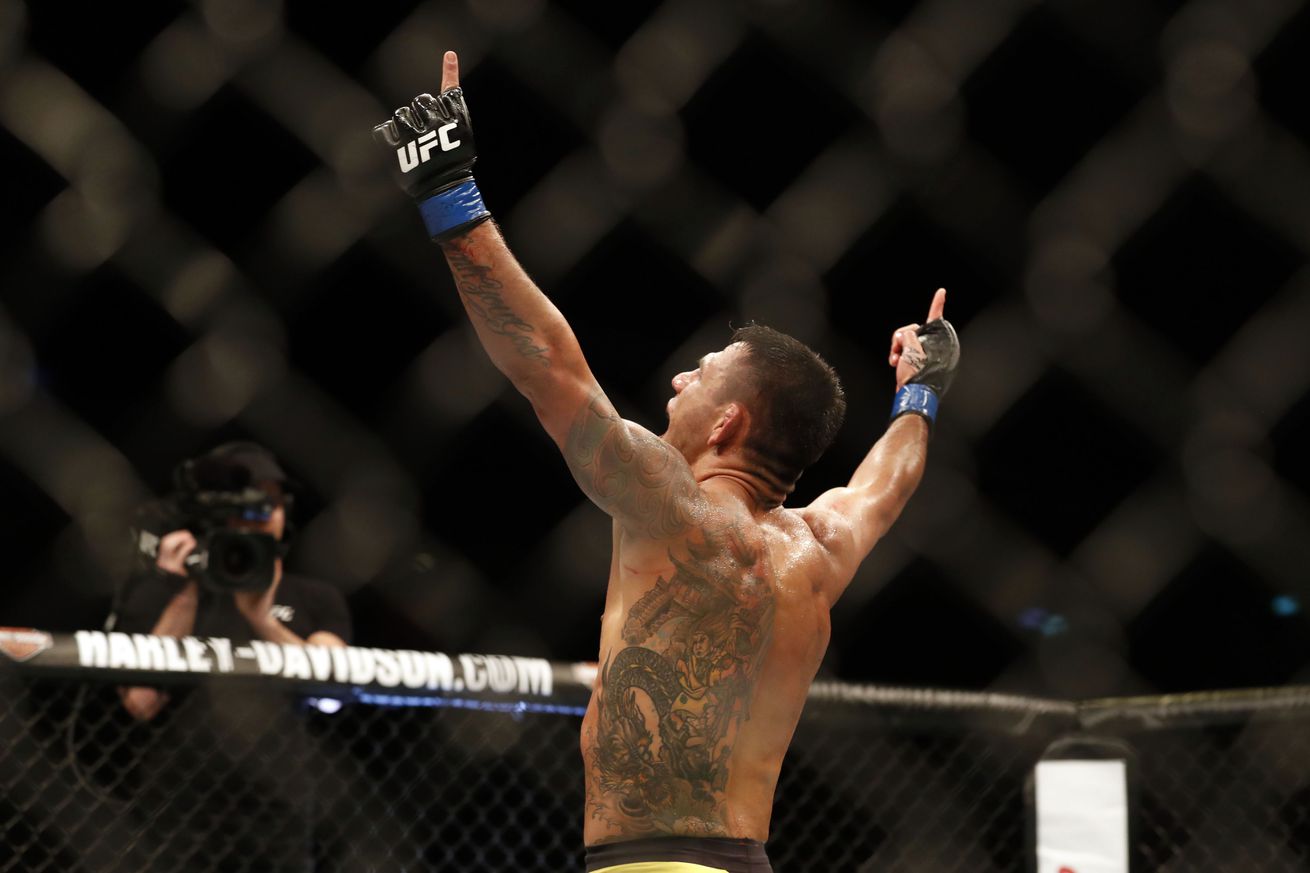 “RDA” entered this bout with just a single Welterweight win under his belt, but he was already being looked at as a potential title contender. He was facing a serious height and reach disadvantage, so this bout really was a showcase of whether he could truly handle a full-sized 170 lbs. fighter.

Meanwhile, Magny was forced to take some time off to recover from injuries. Last night was his return to the Octagon, and Magny hoped that another win — which would make it five victories in his last six — would propel him into the mix.

Magny opened with some fast movement, jabs, and kicks, but a quick low kick from dos Anjos swept his opponent to the mat. Magny landed in half guard and attempted to use an underhook to stand, but dos Anjos excellently used the threat of the guillotine and d’arce to keep Magny pinned.

After resisting the initial explosion attempts of his opponent, “RDA” went to work. He kicked past Magny’s guard into side control. After landing a knee to the body, dos Anjos stepped into mount. All through the transitions, Magny tried to defend and explode, but dos Anjos kept constant hip pressure and advanced regardless.

From mount, dos Anjos began dropping elbows. Magny turned his back a bit in an attempt to hip escape, and the Brazilian jumped on him with an arm triangle choke. It was immediately tight, but “RDA” patiently moved to side control and dropped his weight on the choke.

Magny had no choice but to submit.

This was a brilliant win from dos Anjos. In recent years, the focus for him has been on kickboxing, as dos Anjos swarmed his foe with pressure and power punches. That may have been the plan tonight as well, but dos Anjos reminded fans why he’s so highly regarded on the mat after a leg kick put him in top position.

Dos Anjos’ positional work was brilliant. Each step of the way, “RDA” would fully dominate the position and gain full control before trying to advance. It was methodical, and Magny’s defenses were routed despite his attempts to stop the onslaught.

It seems unlikely, but dos Anjos is already in position to fight Tyron Woodley for the strap. He was the alternate for the Demian Maia title fight, and now he has a second, even more impressive victory under his belt. He’s a great match up for “T-Wood” and a surefire guarantee that Woodley would not be able to coast through the fight.

For about 10 seconds, Magny was moving and striking well. Once on his back, however, he really struggled with dos Anjos’ jiu-jitsu skill. That’s been a problem for him in the past, as two of his previous UFC losses — Demian Maia and Sergio Moraes — relied on submissions.

Aside from some decent guard work showcased against Johny Hendricks, Magny hasn’t shown much technique from his back. More importantly, the jiu-jitsu fighters that have taken him down have torn through his defenses. He’s otherwise a very well-rounded fighter, but this could be an area fighters will look to exploit in the future if not developed.

Last night at UFC 215, Rafael dos Anjos strangled his foe in the first round. Who should the Brazilian face next?