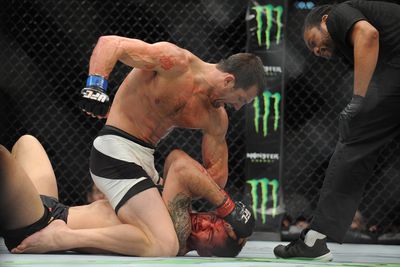 Now that Luke Rockhold is Ultimate Fighting Championship (UFC) middleweight champion, thanks to a technical knockout victory over Chris Weidman at UFC 194 last weekend in Las Vegas, Nevada (video), it’s time to start talking about his next fight.

On paper, it’s hard to deny that Yoel Romero is next in line.

But Rockhold is interested in big fights that pay big bucks, and he wasn’t exactly blown away by “The Soldier of God,” who needed a split decision win to squeak by fellow 185-pound contender Ronaldo Souza (replay), also at the “Aldo vs. McGregor” event.

I want a fight that makes sense for me. I want a big fight for the fans to enjoy, and obviously, I want to get paid and make big numbers…I want the right fight. I want the biggest fights I can get. Vitor is a great fight for me right now. I wanna go out there and get out all my revenge on this guy, of course. I believe he got me with an unfair advantage, and I know I can rewrite that tale.

Yoel Romero is a tough dude, but he didn’t look that great against Jacare, and Jacare didn’t look that great, either. I wasn’t very impressed with their performances. He’s a tough guy, so we’ll have to see what the bosses like. Right now, it’s a weird time. Does Chris Weidman deserve the rematch first? I don’t know. That’s all up to them. Personally, I want the biggest fight, and I think that is either Chris or Vitor. Has Anderson Silva and Vitor Belfort been booked yet? That wouldn’t be a bad fight, either.

Silva and Belfort may end up fighting each other.

Is @LukeRockhold scared to fight me?