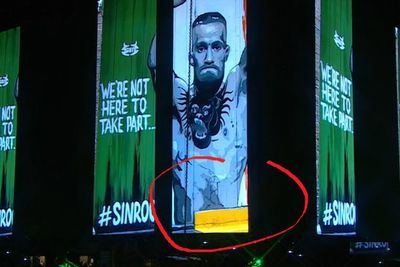 Just like Fight Club, it happened so quickly that if you blinked then you probably missed it.

And yet, deep in your subconscious something was whispering, wait a minute, that was a penis.

Yes indeed, fight fans, UFC somehow missed that a penis had been erected on a famous mural of Conor McGregor in front of Temple Bar in Dublin.

The mural appeared in July of 2014 to honor the featherweight fighter, with one of his quotes, “We’re not here to take part, we’re here to take over.”

In the intervening year and a bit, however, some clever dick added his own artistic interpretation to the mural, and that was what was aired by UFC while McGregor made his way to the cage to face Jose Aldo at UFC 194.

The snafu was spotted by a sharp-eyed Redditor. As pointed out in the comment section, “I guess Reebok also do the graphics for the walk outs.”

Ok, keep it in your pants guys. It’s only a crude drawings. Jeez.