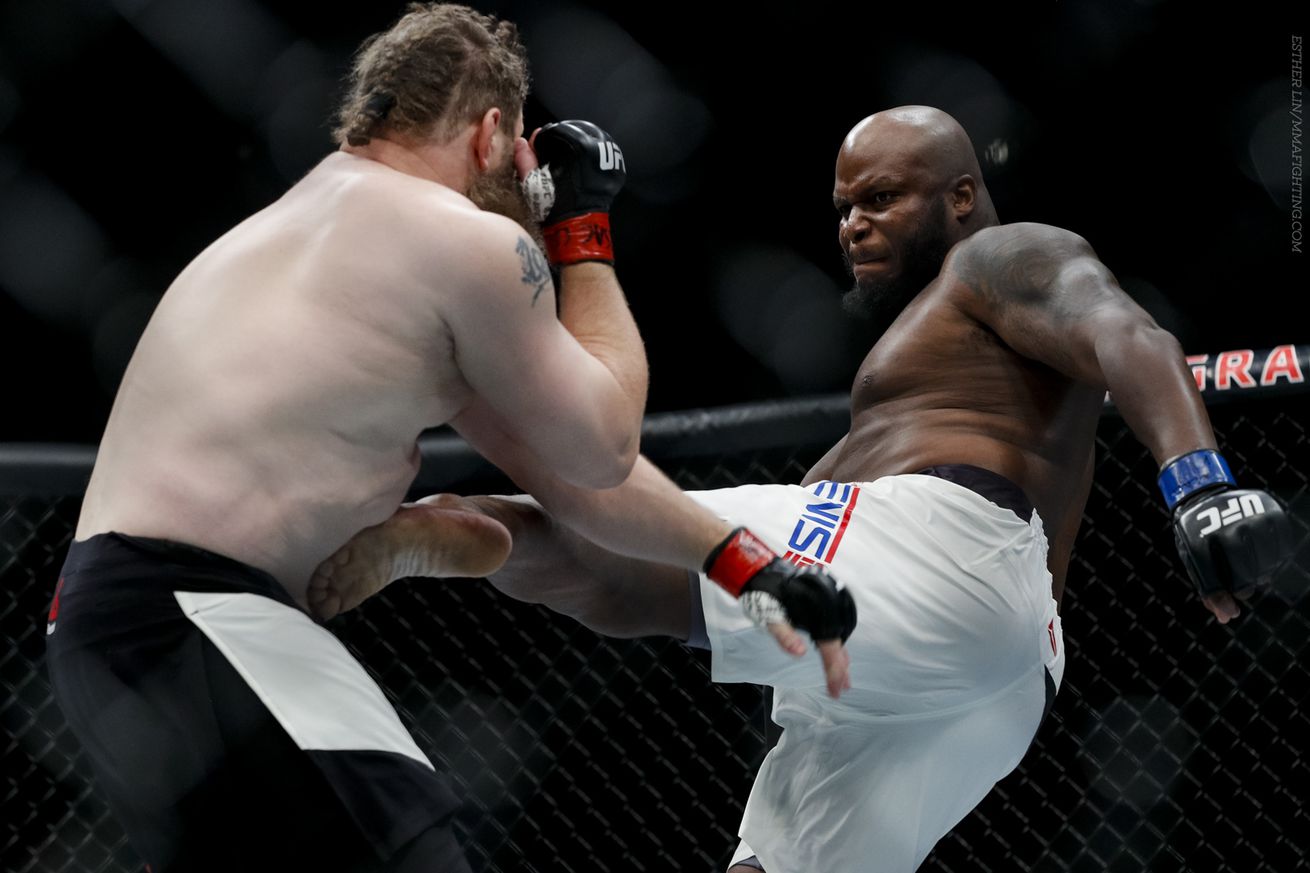 This card was not great to begin with, and it took some crucial hits, making it even worse. This event had a decent light heavyweight bout pitting Gian Villante and Patrick Cummins, but Cummins withdrew from the bout with a nasty staph infection, and was replaced by promotional newcomer Saparbek Safarov. The other bout that drew some interest to the card, was a relevant bantamweight scrap between Aljamain Sterling and Raphael Assunção. Sterling suffered an injury and the fight got rescheduled to UFC on FOX 23. So here we are.

Being on a four-fight winning streak at heavyweight, which is not seen often, and coming off wins over big names such as Roy Nelson and Gabriel Gonzaga, I was expecting Lewis to get a different type of opponent in this one. Perhaps someone with a bigger name that would actually make this feel like a must-watch main event. Regardless, Abdurakhimov is a skilled heavyweight with a winning UFC record.

Abdurakhimov is a bit small for a heavyweight, but that comes with some advantages. Abdurakhimov is fairly quick, has reliable cardio, and has a well-rounded skill set, as he possesses decent boxing, and some decent takedowns. Meanwhile, Lewis is the bigger man here with a huge advantage in punching power. He has a good variety of attacks from his feet, has improved takedown defense and the ability to get up after being taken down.

I see Abdurakhimov having a hard time taking down or controlling Lewis due to his disadvantage in power and raw strength, making it a stand-up fight. And on the feet, Lewis’ longer reach, and superior striking and power should get him a win here. And probably a vicious one too.

Ngannou has looked impressive in the UFC, stopping the three opponents he’s fought in the promotion. He’s huge, has an incredible amount of physical power, is very explosive and keeps things simple. Ngannou is a solid striker with nice straight punches, and doesn’t have the best takedown defense, but he’s great at getting back on his feet once he’s taken down. Also, his physical strength fills in a lot of the holes he might have on the ground.

Hamilton hasn’t had the most consistent UFC career as he’s been alternating between wins and loses in his past six bouts. Hamilton is tough and persistent. He doesn’t have the best takedowns in the heavyweight division, but once he gets top control, he can be trouble for a lot of people, as he posses solid top-control skills.

I have a hard time seeing Hamilton taking this fight to the ground, and I don’t see Ngannou losing in a striking battle.

According to the betting odds Corey Anderson should win this fight no problem, but I think this fight is a lot closer than what people think.

Anderson is a very good athlete, and can do it all. He proficient in both the grappling and striking department. He’s also keeps a nice pace during his fights. O’Connell has very good boxing, is tough as hell, and always looks to move forward. He’s good at closing the distance and slipping in short punches that can add up to cause damage. Although grappling is not O’Connell’s strength, I wouldn’t say it’s bad or a weakness. It’s definitely good enough to keep fights in his comfort zone – standing.

I’m having a tough time picking in this one because my brain says the top-10 fighter who’s 5-2 in the UFC should beat the unranked opponent that’s 2-4 in the promotion. Yet, something tells me O’Connell is going to rise to the occasion, stuff Anderson’s takedowns, and outbox him in a wild fight.

I had a hard time finding footage on Saparbek Safarov, but from the few fights I saw, we’re in for a crazy fight. Saparbek is a wild man, that looks unathletic, but actually has very good cardio and is weirdly strong. He has good takedowns and solid submissions, but he strikes carelessly. He throws wild bombs and leaves his chin wide open. That strategy has worked for him till this day, as he’s 8-0 in his professional MMA career. But I see that streak coming to an end against Gian Villante.

See, Villante is strong too and has very good takedown defense. He’s also very skilled on his feet, and is very calculated with his shots. I see Villante staying away from the wild punches of Safarov, and countering when he sees the opportunity.