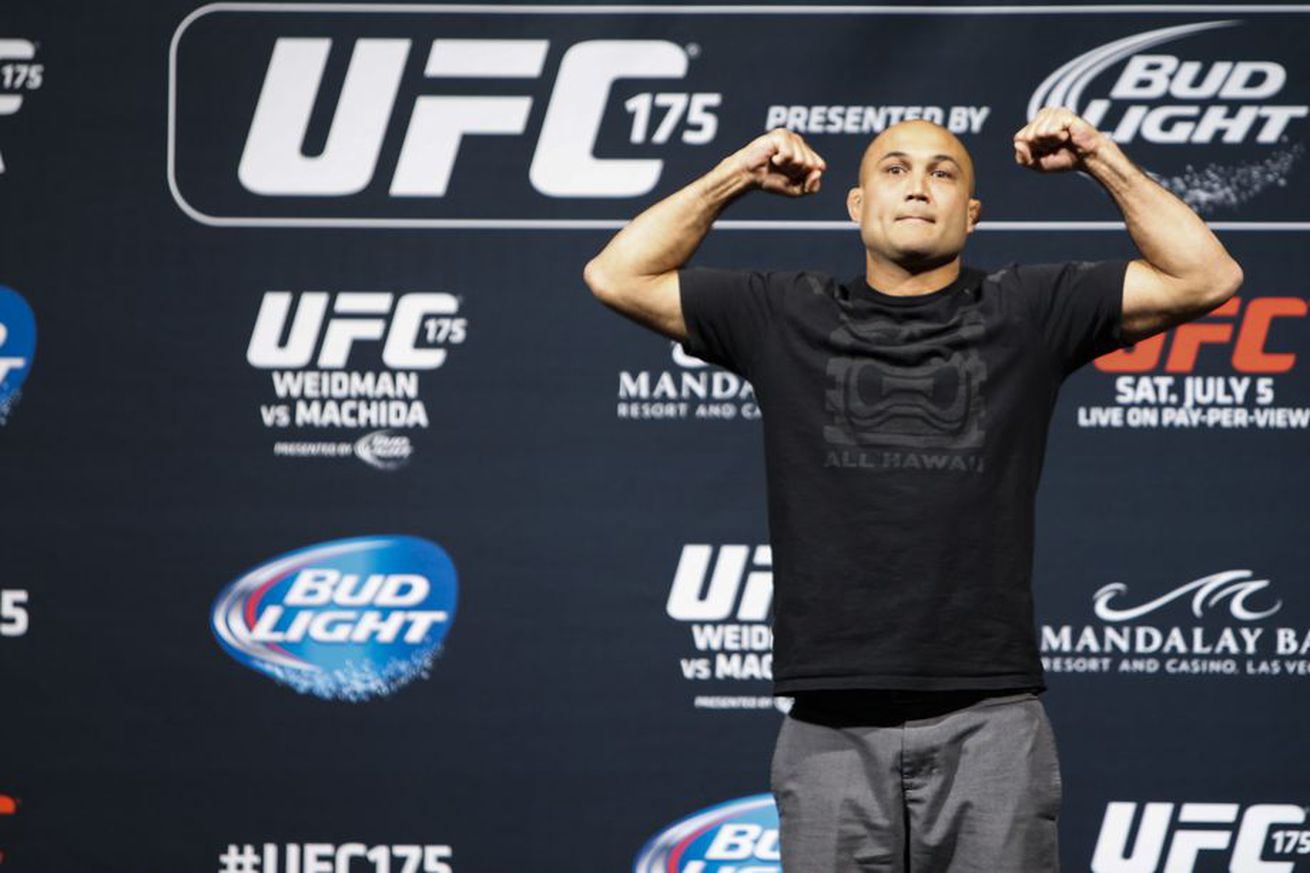 Ultimate Fighting Championship (UFC) is back on free TV, as the world’s largest mixed martial arts (MMA) organization is set to stage UFC Fight Night 103, which is set to go down tonight (Sun., Jan. 15, 2017) live from inside Talking Stick Resort Arena in Phoenix, Arizona on Fox Sports 1. Headlining the card will be an intriguing Featherweight bout, as former UFC Welterweight and Lightweight champion BJ Penn mounts his comeback against rising contender Yair Rodriguez. In the co-headlining act, Joe Lauzon will take on Marcin Held in 155-pound action.

After two and a half years away from the fight game, Penn attempts to mount one more comeback, and he isn’t just doing it for fun, as he seriously wants to make a run at the 145-pound strap, becoming the first-ever fighter to ever hold three-division titles. But, his road to glory won’t be easy, as his first draw comes against a tough, gritty and exciting prospect in Rodriguez that has proven to have all the makings of a future champion. Granted, the former Ultimate Fighter (TUF) winner’s biggest wins have come agaisnt Alex Caceres and Andre Fili, but a win over “The Prodigy” could put him over the top. Penn has taken the proper steps to secure himself a successful return, joining the famed Jackson-Wink MMA camp in Albuquerque, New Mexico. With a great team of trainers and sparring partners around him, the living legend looks to show an old dog can learn new tricks. He’ll be doing against a much younger, and perhaps hungrier dog, though.

Joe Lauzon vs Marcin Held doesn’t exactly scream co-main event status, but after Bryan Caraway was forced out of his co-headlining bout against Jimmie Rivera, the next bout had to be moved up; which shows you the lack of depth of the event.

Jussier Formiga was originally set to face Sergio Pettis but was removed from the fight and replaced by John Moraga. Also, a fight between Damian Grabowski and Viktor Pesta was scrapped after Damian dropped out for undisclosed reasons and replaced by Oleksiv Olynyk. After the aforementioned Caraway was bounced from the event, Jimmie Rivera refused to be a “bully” and take on Marlon Vera on short notice.

Devin Powell will bring his six-fight win streak with him for his Octagon debut against fellow newcomer Drakkar Klose.

How The Prelims Look:

Let’s be real, the star power is lacking when it comes to the prelims, as Frankie Saenz vs. Augusto Mendes is headlining the “prelims” portion of the event. After that, you have plenty of filler fights with no big names attached.

Who Needs A Win Badly:

If Penn wants to show he has plenty left in his worn down tank, he needs a win in the worst way. After dropping three fights in a row — albeit against Frankie Edgar, Rory MacDonald and Nick Diaz — “The Prodigy” dropping his fourth straight will almost certainly put the final nail in the coffin in his storied mixed martial arts (MMA) career. While Penn hasn’t stated it’s a one-and-done deal should he lose, one has to think the promotion;s chances of giving Penn another bout after four straight losses are pretty slim.

This event isn’t the most stacked card, but there are some interesting matchups on the main card, including Court McGree taking on Ben Suanders. Also, Sergio Pettis looks to keep his momentum going in order to breakthrough to “superstar” status, as he guns for his third straight win against John Moraga. But, all eyes will be on Rodriguez vs. Penn, as the old lion attempts to make one last run against a hungry contender who is adamant his time is now. And it will be if he can stomp out one of the best to ever compete in the sport. Granted, Penn’s best days are behind him, but a win over him on your resume is always a good thing to have. On the flip side, if Penn can manage to get a win over the rising prospect, it could be the revival of his career and put everyone on notice, the champion included.