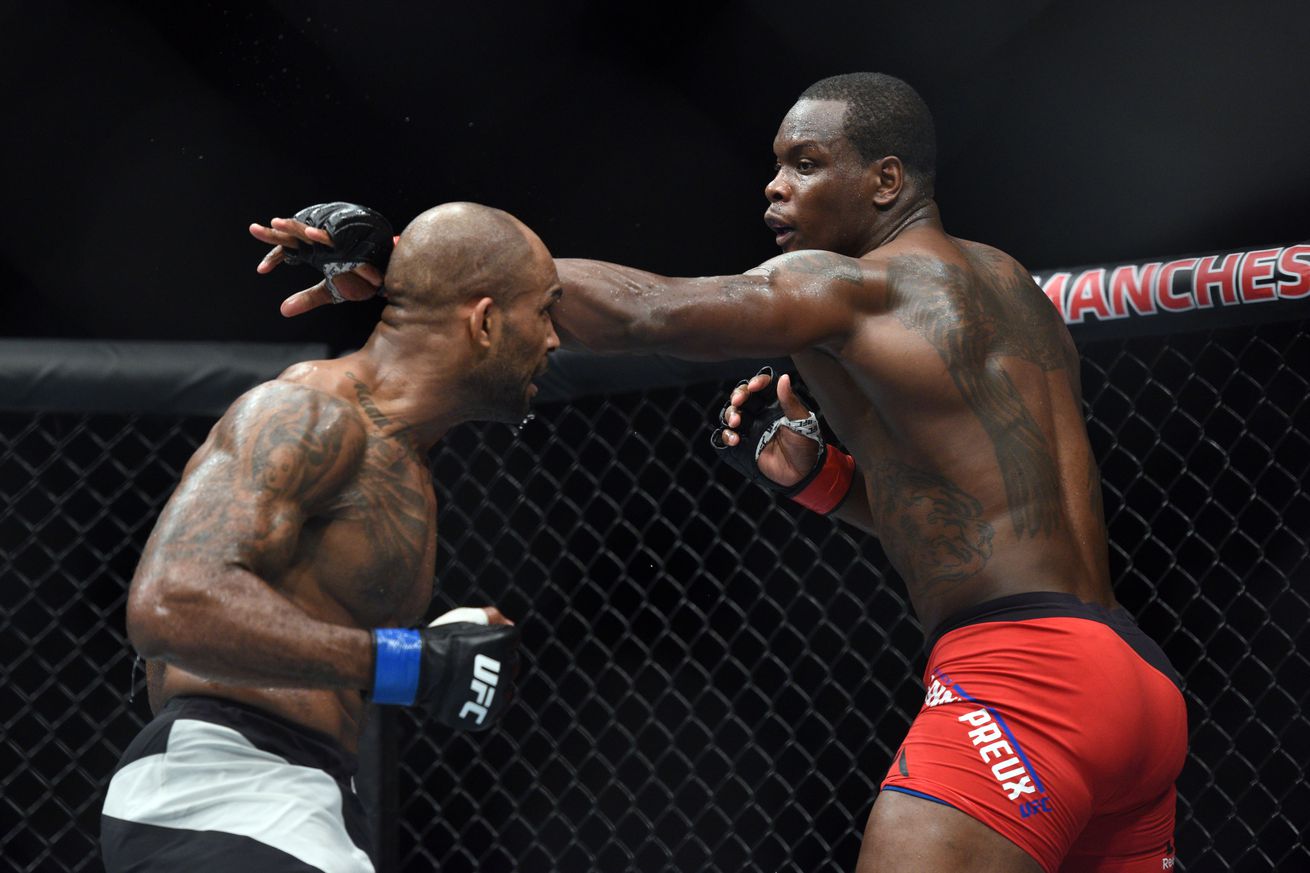 Saint Preux enters this match up in an odd position, losing three of his last four bouts, but is still one of the top contenders in an empty division. In this match up, Saint Preux will face off with a talented newcomer and attempt to rebound from his recent knockout loss. Like most of our readers and the mixed martial arts (MMA) public as a whole, Oezdemir is very much a new name to me and accepted this fight on very short-notice. While the Swiss athlete has not exactly faced top competition, “Cousin” does have a decent amount of experience and finishing ratio for a debuting athlete.

Ovince Saint Preux
Record: 19-10
Key Wins: Mauricio Rua (UFC Fight Night 56), Patrick Cummins (UFC on FOX 15), Ryan Jimmo (UFC 174)
Key Losses: Jon Jones (UFC 197), Jimi Manuwa (UFC 204), Glover Teixeira (UFC Fight Night 73), Ryan Bader (UFC Fight Night 47)
Keys to Victory: Saint Preux is one of the finest athletes in the 205-pound division, but the technical side of his game is a bit of a mixed bag. He’s pulled off some brilliant moves in each area — such as a Von Flue choke and a switch-stance hook knockout over “Shogun” — but Saint Preux also looks a bit lost on occasion.

It’s been just four months since his upset loss to Manuwa.

Luckily, this is a major step back in competition. Oezdemir is a decent prospect, but he’s nowhere close to the caliber of fighters that “OSP” has been facing. So long as Saint Preux can avoid making any costly mistakes, this bout should be his.

In one of Oezdemir’s few bouts in the United States, he faced off with Kelly Anundson in Bellator back in 2014. Anundson used chain wrestling to wear down his foe and secure a choke, which is a strategy that Saint Preux could replicate.

Against a man with nine knockout wins, that’s likely the safest path to victory.

Volkan Oezdemir
Record: 12-1
Key Wins: None
Key Losses: Kelly Anundson (Bellator 115)
Keys to Victory: While Oezdemir may have come up short opposite the sole strong wrestler that he’s faced so far, he did show a reasonably strong sprawl and distance control. His problems came when Anundson transitioned between takedowns and stuck to him like glue, which has never really been Saint Preux’s wrestling style.

If Oezdemir can keep it standing, he’s got a real chance to pull off the upset.

Oezdemir has power from both range with kicks and in the pocket, which should benefit him here. Navigating Saint Preux’s kicking range is often a challenge for his opponent, as “OSP” slams his foe with hard left kicks.

A solid kicker like Oezdemir should be able to trade at that range without being dominated, which will help him close the distance. In the pocket, Oezdemir may just be the tighter boxer and has proven power.

Bottom Line: This is an important bout between a pair of finishers.

For Saint Preux, this is really a must-win fight. He’s on a bad slide already, but at least those losses came to some of the division’s best. If he loses to a very unproven newcomer, “OSP” will drop out of the rankings and be forced to climb back up.

At 33 years old, he doesn’t have that kind of time.

The more likely situation is that this match up does its job and returns Saint Preux to the win column. He should be able to win big here, which will help him score more big fights in the near future.

As for Oezdemir, this may not be ideal circumstances for his UFC debut, but it’s really not a bad situation either. He’s a large underdog, sure, but that leaves little pressure on the knockout artist. A loss is largely expected and will not be held against him, whereas a win makes him an immediate factor at 205 pounds.

At UFC Fight Night 104, Ovince St. Preux and Volkan Oezdemir will throw down. Which man will have his hand raised?