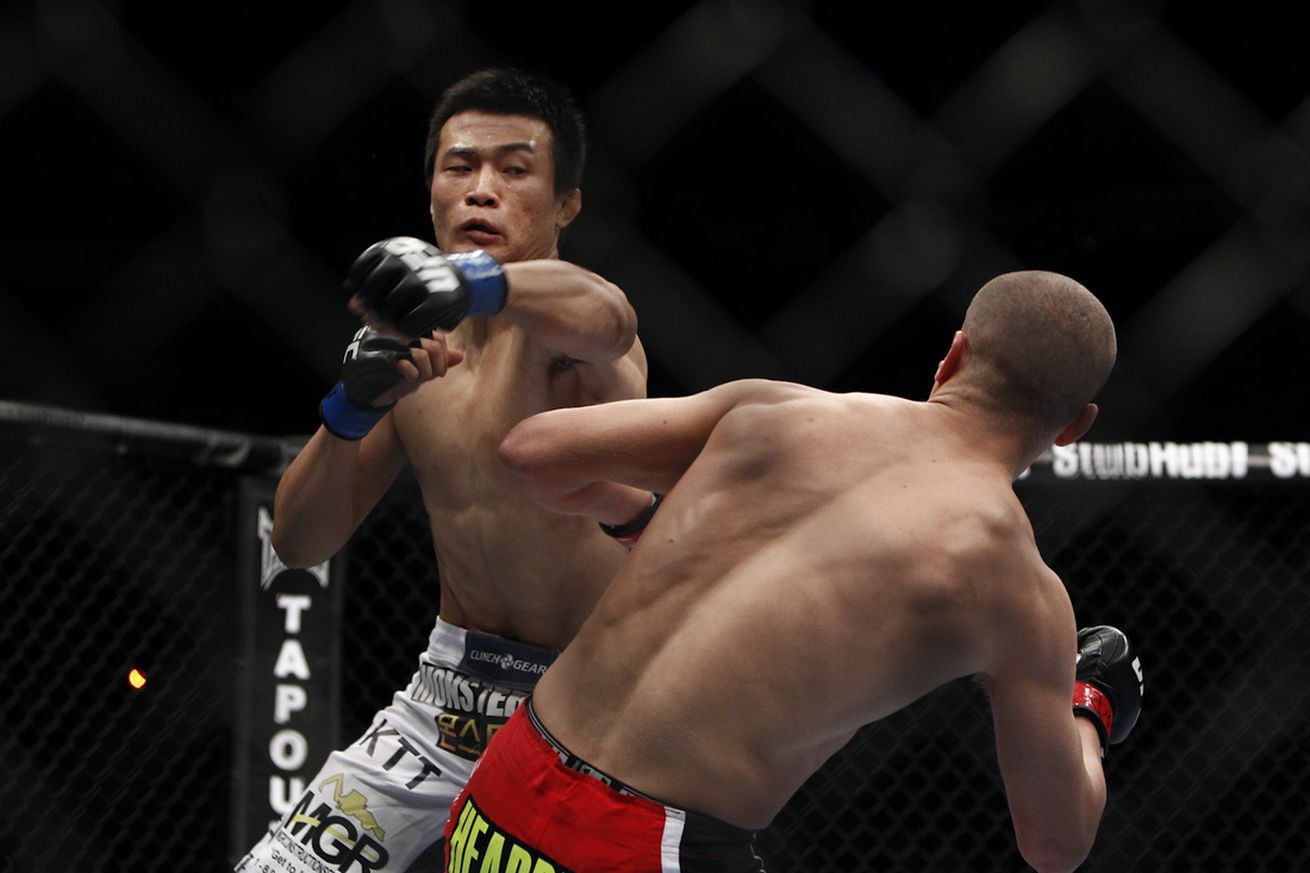 After completing his mandatory two-year military service in South Korea, the “Korean Zombie” is finally returning to the Octagon at Saturday’s UFC Fight Night 104. Chan Sung Jung will be fighting top-10 featherweight Dennis Bermudez in a bout that promises non-stop action. This card, although not so great on paper, features several important bouts for the women’s strawweight division in Jessica Andrade vs. Angela Hill, Alexa Grasso vs. Felice Herrig, and Tecia Torres vs. Bec Rawlings.

I would have preferred to see “Korean Zombie” fight Renan Barao or someone in the top 15 for his return fight, but no, he’s diving right into the top 10, taking on a very game Bermudez. Anyway, I’m not complaining, as this could very well turn into a Fight of the Year candidate.

The “Korean Zombie” fights wildly, yet technically and very few can pull that off. He has cardio for days (that might be in question due to the layoff), has good striking with a high output, and a very advanced ground game. His submissions are slick and dangerous, and so is his scrambling ability. Being a skilled wrestler, Bermudez knows a thing or two about scrambling, and that’ll be fun to see how it plays out against “Korean Zombie.” Bermudez is gritty, extremely durable, fights at a high pace, and likes to dictate where the fight goes with his wrestling. He’s also extremely athletic, has decent striking, and hits very hard.

Bermudez sometimes exposes himself a bit whether it’s grappling or striking, and that’s something “Korean Zombie” can very well capitalize on during the bout. But Bermudez is one of the last guys in the featherweight division you want to fight for five rounds after a long layoff because he’ll make sure to test your cardio. That’s where this gets tricky.

So, either the “Korean Zombie” catches Bermudez or Bermudez outpoints Jung. Tough choice, but I’ll go with the first scenario.

A promising prospect looking to climb the strawweight ladder vs. a battle-tested veteran trying to get back in the mix. I like this matchup a lot, and I find it interesting for the situation both fighters are currently in, and their clashing styles as well.

On the other hand, Grasso is tough, has very good takedown defense, and is also very technical on the feet with a good output like Herrig. I do find Grasso to be a bit more dangerous and more powerful with her strikes. But on the ground, I see Herrig having a significant advantage. However, the question is, can Herrig get through Grasso’s takedown defense and get the fight to the ground? Because if this bout stays standing, I see it being a competitive and fun fight with Grasso coming out on top, probably not by a landslide but with a decisive victory.

It’s not crazy to think that the crafty veteran can pull off the win here, but I don’t think that’s the most probable outcome.

Fun lightweight match up here. Trujillo is tough and can take a beating, has good striking with crazy knockout power, but not the best ground game. He’s very strong and athletic, so he can give guys with superior grappling some issues, but that only works to a certain level. Meanwhile, Vick has clean boxing, fights long, and has submissions.

This is one of the harder fights to predict on this card. There are two outcomes that I see happening here. Either Trujillo catches Vick with a brutal punch and knocks him out, or Vick fights smart and uses his length, stays behind his jab, and outboxes Trujillo to a decision. So will Abel be able to knockout Vick within 15 minutes? I’m going to go with a hesitant no.

Oezdemir is a solid kickboxer with decent takedown defense and grappling. He’s got good leg kicks and attacks the body often. However, all the footage I’ve seen was against regional fighters. Saint Preux is not a regional fighter, he’s battle-tested and has proven to be a top-10 light heavyweight. Saint Preux might not be as technical as Oezdemir on the feet but his size, power and athleticism make that gap in skill a lot closer. Also, wrestling might not be Saint Preux’s go-to strategy, but when needed, he’s proven to have some takedowns in his arsenal. I see Saint Preux not taking any chances against Oezdemir, and looking to pin Oezdemir against the cage or taking him down to the ground.

Fortuna is a decent fighter with some serious skills on the ground, giving him a big advantage over Hamilton there. However, I’m not sure why Fortuna is fighting at heavyweight, as he usually fights at light heavyweight and has even made middleweight in the past. At Friday’s weigh-ins, Fortuna weighed in at 210, while Hamilton weighed in at 258. So, I think size will definitely play a factor here, as Hamilton puts his weight and size behind his wrestling and grappling. Also, Hamilton is no scrub on the ground, so he should be able to use a combination of power and technique to defend Fortuna’s attacks. And if Hamilton decides to keep the fight standing, he should have an advantage with his superior boxing and power.

It wouldn’t surprise me if the winner of the fight goes on to a title shot, especially if it’s Andrade. This is a fight between a top-five strawweight who is undefeated in the division and the current Invicta FC 115-pound champion, who’s on a four-fight winning streak.

Andrade is vicious, very strong and explosive for the division, and her fighting style reminds me a lot of Wanderlei Silva. She attacks mainly with powerful looping punches, and mixes strikes well with hooks to the body. Andrade also has good takedowns, good grappling, and an insane guillotine choke. If you haven’t watched Angela Hill’s resurgence in Invicta FC, you’ve missed Hill’s impressive and rapid improvement in all areas of the game. Her Muay Thai still remains her most effective weapon, but her takedown defense and grappling have greatly improved. I find her to be a significant addition to the UFC’s strawweight division, and I think this fight should be a bit closer than what the odds predict.

Regardless, I still see the Brazilian taking this bout, as I find her to be too powerful in her striking and grappling for Hill to pull off the upset.