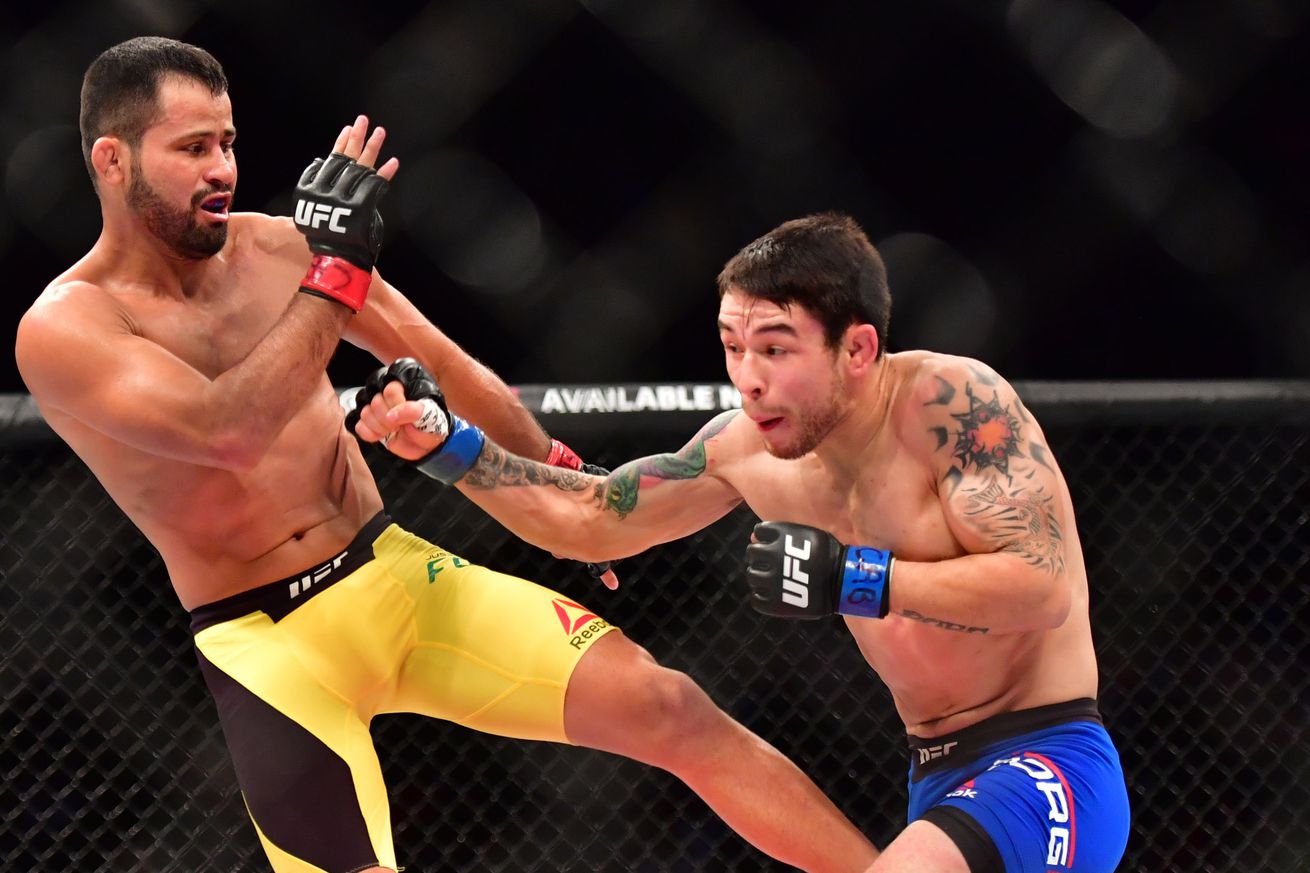 Formiga has been scrapping with the top contenders for years. He hasn’t always won those fight, but the Brazilian has taken out some solid top 10 opponents in recent years. In this match up, Formiga aimed to once again prove himself as a man in the title mix.

Meanwhile, Borg has put on some seriously impressive in his young career. The ranked fighter had a serious opportunity in this match up, as a win would put the young Flyweight in the title mix.

Neither man wasted much time before attacking with their combinations. Both fighters worked well at range and in the clinch, with Formiga’s weapon of choice being the cross whereas Borg’s uppercut found its mark a couple times.

On the whole, the round was incredibly close. The fighters traded and landed at a reasonably high rate, but neither man was able to find a home for the takedown. Borg seemed to have a slight edge in volume heading into the final 10 seconds, but Formiga then rallied with a counter spinning punch and combination.

It was a highly competitive round.

Borg committed to a real double leg for the first time to open the second, but he failed to ground the Brazilian. He entered in on a great single leg and transition moments later, but again Borg was unable to put his foe on the mat.

After defending the shots and spending a good deal of time with his back to the fence, Formiga went on the offensive a bit more. The punch count was pretty similar, but Formiga did do some very solid work with his low kicks.

In all likelihood, they won him the round. Still, nothing was guaranteed, and the fight was very much up for grabs heading into the final five minutes.

Once again, Borg wound up deep on a takedown immediately to start the round. It didn’t land, but it began a wild exchange that saw both men threaten to take the back. Eventually, Formiga smartly pushed his foe’s head to the mat, allowing him to eventually deny the takedown with something of a switch and land in back control.

Once in that position, Formiga is a master. He quickly locked in the body triangle and controlled for a couple minutes, but Borg did an excellent job of switching his hips relentlessly and landing in the guard. From top position, Borg carved his opponent up with elbows, allowing him to nearly take the back when Formiga attempted to scramble. For the rest of the round, Borg controlled his opponent from top position.

All in all, it was an extremely close match, both on the feet and in grappling exchanges. Ultimately, all three judges awarded the decision to Ray Borg.

While either man could’ve reasonably had his hand raised, it’s easy to point to one moment as what earned Borg the win. In the third, Borg was stuck in Formiga’s wheelhouse, but he fought hands and hips expertly to eventually spin into top position. Holding the back mount is exhausting, and Formiga was pretty tired after losing that position.

It allowed Borg to dominate the second half of the round and secure himself the decision.

With this win, Borg jumps into title contention. There’s a clear next fight for him, as Joseph Benavidez is without a dance partner currently. That fight could be made quickly, and the winner would undoubtedly deserve a title shot.

As for Formiga, there’s definitely a case that he won the first two rounds. However, they were quite close, and he simply could not afford to lose the third round so clearly in a tight fight like this.

Despite the loss, Formiga fought well. His wrestling defense was incredibly, as he defended deep shots and even reversed his way into top position multiple times. Additionally, his leg kicks clearly had a big effect on his foe and likely could’ve been an even more major factor if he really committed to them.

After this defeat, a match up with someone like Brandon Moreno would make sense.