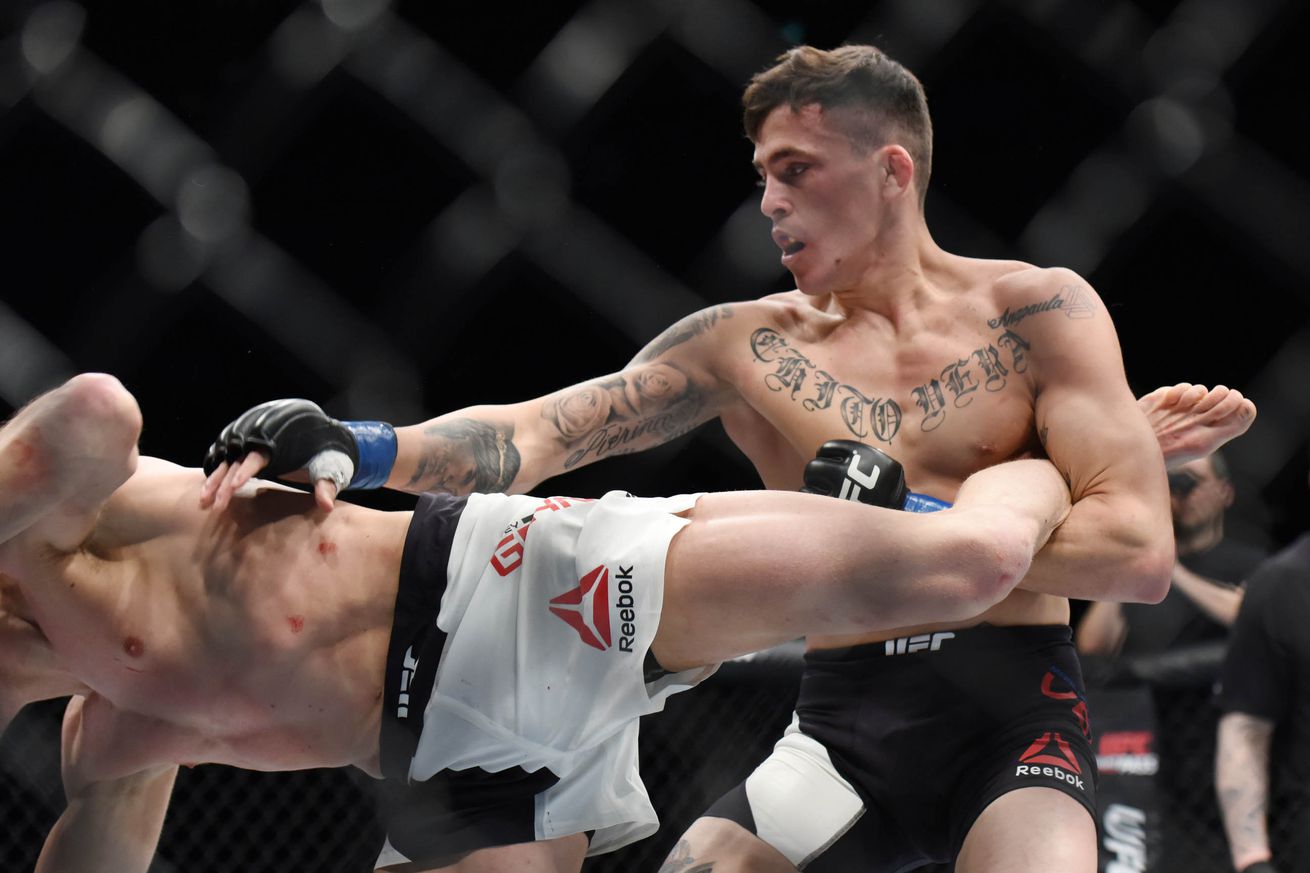 Brad “One Punch” Pickett faced Marlon “Chito” Vera in his retirement fight this Saturday (March 18, 2017) inside O2 Arena in London, England, for the UFC Fight Night 107: “Manuwa vs. Anderson”.

Pickett touched gloves for the last time, wearing red shorts, while the southpaw Vera wore yellow. Pickett absorbed a couple body kicks before driving in for a double-leg against the cage, picking Vera up bodily and slamming him hard into side control. Vera scrambled back to his feet. Pickett charged forward and landed a hard left hook off a Vera leg kick. Pickett was pressuring, bobbing forward, but Vera poked his eye. Pickett got back to it, cracking an overhand off Vera’s guard. Pickett landed a low kick, Vera hit a front kick to the body. Vera went down from a left hook but got right back up. Pickett shifted stances and dove in on a takedown, but Vera defended. Pickett slipped a jab and landed a double hook to the body and head. Vera lands an inside low kick but eats a hard right hand from Pickett.

Pickett ate a low kick as he pressured forward in Round 2. Vera timed a knee. Vera hit another nice jumping knee up the middle. Pickett dove forward on another double-leg. He lifted Vera briefly, couldn’t get it, then lifted again and slammed Vera onto his back. He landed a hard elbow from the open guard of Vera. Pickett was doing good work on the floor, and unlike the last bout, the referee seemed content to let him work on the ground. Pickett alternated between elbows and punches. As he got to his feet, looking to pass, Vera landed upkicks, including a couple as Pickett put a knee down that seemed illegal. The ref said, carry on, and the fight returned to the feet. Vera hit an inside low kick and Pickett countered with his left hook. Pickett pressed forward, eating a head kick but landing an overhand. Vera whiffed on a wheel kick as the round ended.

The arena swelled with support for Pickett as the third round began. Vera pressed foward, looking to clinch and land hard knees. Pickett blocked two body kicks. He landed a low kick of his own and swung for his left hook. Vera landed two thudding jabs. He landed two body kicks and an inside low kick. Pickett pressed forward and landed a couple hooks. He swung for an uppercut, then an overhand. Vera landed another low kick that buckled Pickett’s stance. They exchanged jabs and Vera tried a knee behind it. Vera lands a front snap kick. Pickett feinted foward, and Vera landed a huge head kick that knocked Pickett down! He runs in to land more ground-and-pound, but the referee stepped in before Pickett could take too much damage. Just like that, Pickett’s retirement fight was spoiled, in a fight he was likely winning two rounds to one. Huge win for Vera, huge heart breaker for Pickett.

Vera called for London to give respect to Pickett as he teared up after the fight, describing how he has looked up to the Englishman since he was 17 years old, but has been working his whole life for this fight. “Give some respect to Brad, and give cheers for this guy because he is a legend!” “When I was in high school, he was beating the flyweight champion of the world!” He described his journey to the cage from his homeland of Ecuador, and it worked, as the crowd cheered upon his exit. Dan Hardy tried to comfort Pickett, who was very emotional. Pickett said he is thankful, and told the crowd he loves them. “Win, lose, draw tonight, I’m just blessed… its time to spend some time with my family.” The crowd raised the roof as Pickett concluded his speech.