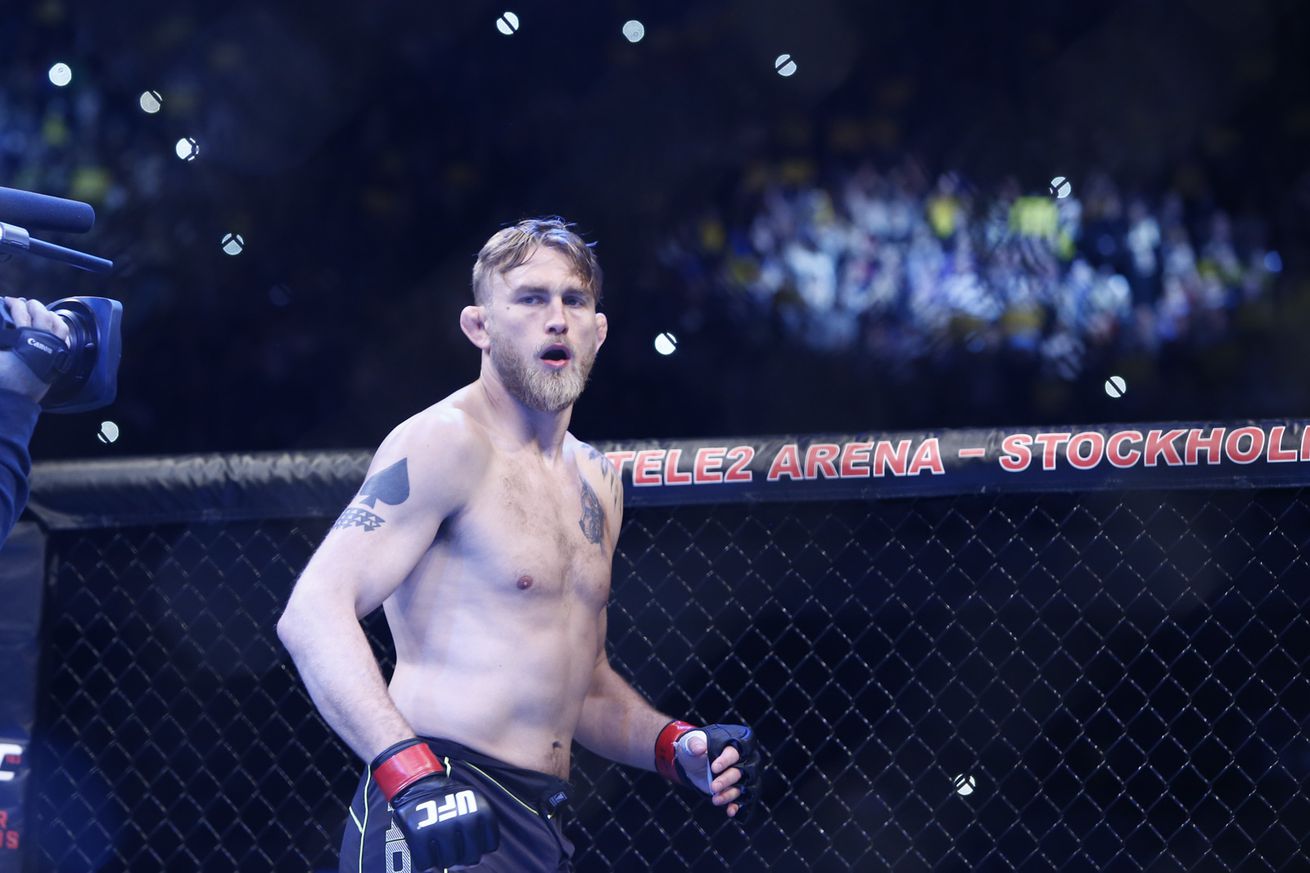 The UFC’s return to Sweden is quite disappointing, compared to the last event they brought to the Scandinavian country. Either way, UFC Fight Night 109 is headlined by two important light heavyweight bouts: Alexander Gustafsson vs. Glover Teixeira in the main event, and Volkan Oezdemir vs. Misha Cirkunov in the co-headliner. Additionally, this Sunday’s card also features European prospects in Marcin Held and Darren Till.

The No. 1-ranked guy in the UFC’s light heavyweight division will be taking on No. 2. Yet, this fight won’t necessarily give us the next title contender and it doesn’t really carry the atmosphere of excitement that most top-contender fights do.

Both Gustafsson and Teixeira didn’t look good in their last outings despite picking up wins – that’s probably the reason why this fight doesn’t have much buzz. Last September, Gustafsson was battered on the feet by the fairly unknown Jan Blachowicz and was forced to wrestle the Polish fighter to a decision win. Meanwhile, Teixeira took on a similar challenge to Blachowicz in Jared Cannonier earlier this year. The Brazilian looked slow and lost the stand up battle to the less experienced Cannonier, but was able to grapple his way to a decision.

I’m really curious to see how these two look come Sunday. Both guys have a lot of mileage so it’s possible that their last performances were signals of decline, but it’s also possible they just had off nights, as it happens to everyone. So let’s take a look at the factors that’ll affect the outcome of this fight:

Takedown defense and more: Taking down Gustafsson is an extremely difficult task, and keeping him down is almost impossible. Jon Jones and Daniel Cormier are in my pound-for-pound list of the best MMA wrestlers, yet they had very limited success trying to take down and control Gustafsson on the ground. This is bad news for Teixeira who often relies on his takedowns and submissions to win fights. You can make the case that Teixeira’s top control and pressure is different than Jones and Cormier’s since it’s more jiu-jitsu than wrestling based, and there is a difference there. But I have a hard time seeing Teixeira taking down Gustafsson, much less keeping him down, turning this bout into more of a striking contest.

Fast beats slow: While Gustafsson didn’t do so well against Blachowicz on the feet, his fast, straight punches and movement were still there; it was his range and timing that made him look off that night. With quick straight punches and constant movement on the feet, Gustafsson should be able to keep the Brazilian at bay, stopping his biggest weapon – the powerful hooks. This is extremely important to not only score on the judges scorecards and do some damage, but to also avoid any close encounters where Teixeira can attempt a takedown.

Prediction: If the Gustafsson that showed up to fight Blachowicz shows up on Sunday, I’d give Teixeira a decent chance, as he only needs a few punches to do real damage. But other than that, I think Gustafsson should get a pretty convincing win here. I see Gustafsson stuffing Teixeira’s takedowns and beating him to the punch on the feet.

This is the easiest fight to pick from the main card.

Volkan Oezdemir started his UFC career strong, picking up an upset victory over Ovince Saint Preux earlier this year. With only one performance in the promotion, Oezdemir is now ranked in the top-five of a very thin light heavyweight division, which is dying for new blood. Fortunately for the UFC, Misha Cirkunov could pump some new life into the 205-pound mix, and they’ve matched him up well here.

Oezdemir is a tough, but technical kickboxer with decent takedown defense and grappling. Oezdemir mixes combinations up well in his striking and attacks the legs and body often. Oezdemir could outstrike Cirkunov, but Cirkunov possesses way too many tools to fall in a striking battle with Oezdemir.

I see Cirkunov playing it smart, testing out his range, timing a takedown, and sinking in an early submission.

Peter Sobotta and Ben Saunders have very similar styles of fighting, and it makes for an interesting matchup.

Sobotta only fought once in the 2016 calendar and this fight with Saunders will be his first fight in 2017, so it’s safe to say he’s been very inactive, which could be an issue for him. Regardless, Sobotta is in the best moment of his career, having won eight out of his past nine bouts and being 3-1 in his second UFC run. Stylistically, the 30-year-old fighter is a fantastic grappler with solid takedowns and dominant top control. Sobotta isn’t much of a striker, but he can hold his own on the feet.

“Killa B” is rangy and can find moderate success striking with his opponents, but, like Sobotta, Saunders is most dangerous on the ground. Saunders usually fights off his back with his rubber guard rather than top control.

Saunders is a bit awkward with his standup, but due to his range and heavy use of kicks, I’d give him a slight edge on the feet here. On the ground, I’m really curious to see how Sobotta’s takedowns and top game will play out against Saunders’ tricky rubber guard. A big part of me thinks Sobotta is capable of taking the fight down to the ground and passing Saunders’ guard. Yet, I’m hesitant to pick Sobotta because I’m not sure if he has the confidence to grapple with Saunders, leaving him to strike with the veteran where I think he loses a close decision. Tough call here.

Everyone and their mothers think Abdul Razak Alhassan will run through Omari Akhmedov, but I have my doubts.

There isn’t much footage on Razak Alhassan, but from what we know, he’s an explosive striker who posses scary power behind his strikes and has a solid judo background. Razak Alhassan is also kick heavy in his attacks, and often gets carried away trying to land a big shot, which leaves him off balance and open to counter strikes.

Akhmedov is more of a brawler and likes to use powerful hooks as his main choice of attack. The Dagestani has a good sambo background, which has allowed him to takedown most of his UFC opponents, and is also far more experienced than Razak Alhassan, having 20 professional fights including seven in the UFC.

This fight is tough to call, mainly because we really haven’t seen much of Razak Alhassan, so it’s hard to tell how he would match-up an against an experienced wrestler. I’m well aware that Razak Alhassan has crazy knockout power and that Akhmedov has been stopped via strikes in his last two loses, but I see Akhmedov’s experience and takedowns getting him a victory here.

Well, the UFC sometimes struggles at giving prospects the right kind of matchups they need to appropriately progress in their fighting career. To some degree, I have similar concerns about this fight than to the ones I had with the Yair Rodriguez vs. Frankie Edgar.

I understand that Oliver Enkamp is a late replacement for Emil Meek, but I think Enkamp could be the next big thing. At just 25 years of age, Enkamp is already a pretty complete package. The undefeated welterweight is a rangy, dynamic striker that can connect wild shots. On top of that, Enkamp is very creative on the ground and can grapple from both top and bottom positions. Enkamp might not be Sage Northcutt young, but has very little mileage on him and is already extremely technical.

It would’ve been nice to have Enkamp face another newcomer or TUF: Latin America guy instead of fighting a skilled veteran in Nordine Taleb. But that’s the fight game, I guess.

I think this fight is closer than what the odds represent, and I wouldn’t be totally surprised if Enkamp scored a sneaky submission. However, Enkamp has looked great against non-UFC caliber opponents, and Taleb is far superior than guys he’s been fighting in the local circuit. Also, playing against his favor is the fact that he remains fairly inexperienced and he’s fighting a seasoned vet in the main card of a UFC event (no pressure). And lastly, the 35-year-old Taleb is in his athletic prime, while Enkamp seems to still be growing onto his frame. Size will be an advantage Taleb will try to exploit in the clinch incase he experiences trouble with Enkamp’s rangy striking.

So, I see this being Taleb’s fight to win, but I think Enkamp will look good in the process much like Tim Elliot did against Demetrious Johnson, or Charles Rosa did against Dennis Siver.

Both fighters need a win here. Maybe the loser won’t get cut from the promotion, but will certainly enter that shaky territory.

Hermansson has perhaps has a bit more job security than Nicholson. The 28-year-old Swede is 1-1 in his UFC run, outpointing Scott Askham in his debut and most recently suffering a submission loss to Cezar Ferreira. Hermansson, a former Cage Warriors middleweight champion, may have an odd style of fighting, but he has good technique behind it. Hermansson is a solid boxer who is constantly in motion with his unorthodox movement. Hermansson also possesses decent takedowns and and a decent ground game. I find Hermansson’s most important attributes to be his good boxing accompanied by his great cardio, and continual pressure. Meanwhile, Nicholson is far less well-rounded than Hermansson. The Floridian is tough, has a diverse striking arsenal that includes plenty of kicks, and carries respectable power behind his strikes.

Although I think Nicholson is more dangerous than Hermansson, I find Hermansson to be the better fighter. This fight should be an even contest in the start, but I see Hermansson’s never-ending pressure, striking output, and threat of the takedowns and clinch work wearing on Nicholson as the fight goes on.