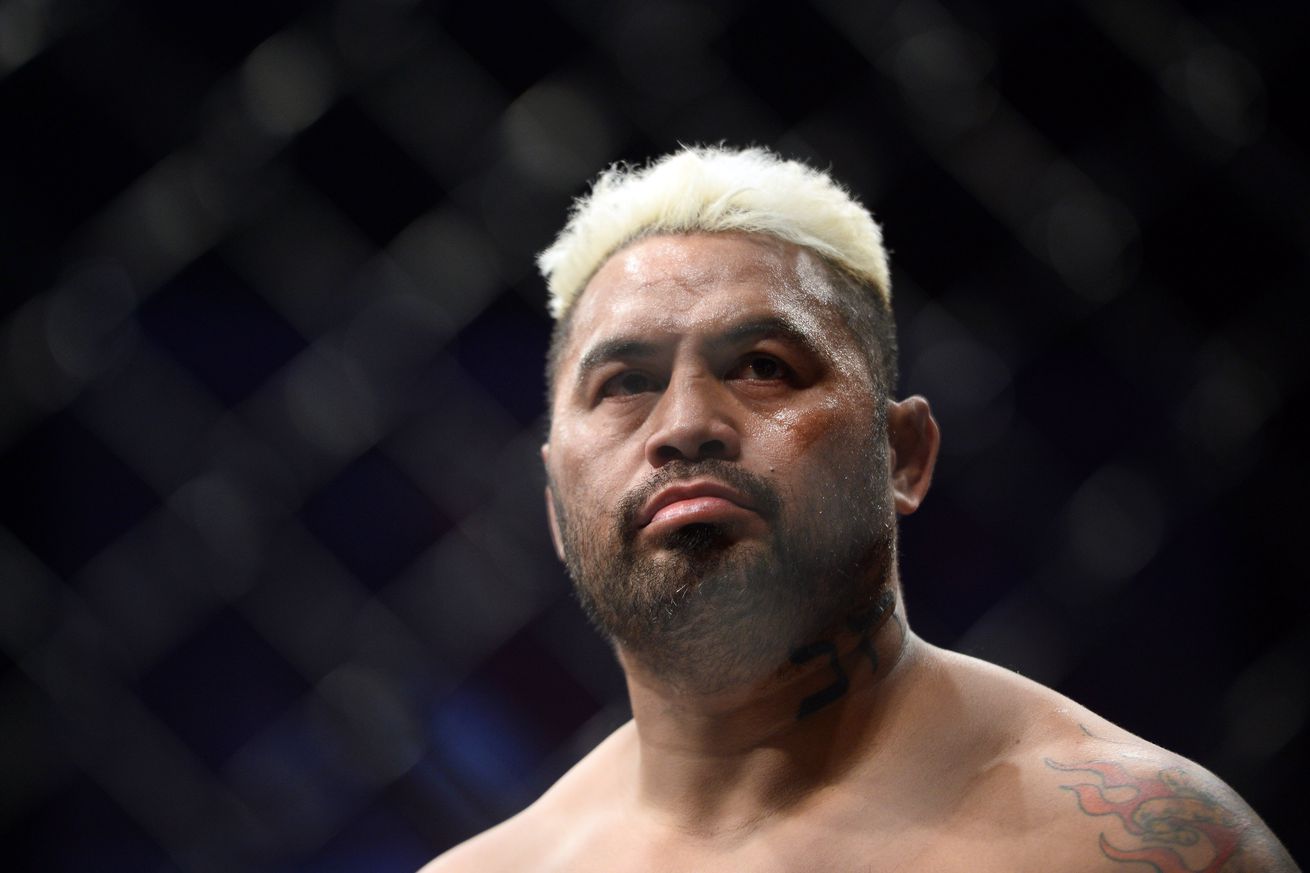 With 14 UFC knockouts between them, Derrick Lewis and Mark Hunt have established themselves as among the most dangerous Heavyweights in the world. This Saturday (June 10, 2017) evening, they do battle in Auckland, New Zealand, headlining UFC Fight Night 110 on FOX Sports 1.

Jesse is currently leading a prisoner revolt in a South American blacksite, so Nostradumbass duties fall to me once again. Should I come up with my own persona for this? Notstradumbass? Confusedcious? I’ll workshop it.

Hunt’s recent struggles are not, as one might think, primarily a product of his age. Sure, he’s slowed down a bit and that legendary chin can’t take the sort of punishment it once could, but his issue is that he’s been figured out. Hunt fundamentally reinvented his striking style for his UFC run, abandoning the free-swinging bruising of his younger days in favor of patient counter-striking predicated on a strong check hook. The low left hand also aids his sprawls, being in a perfect position to slip in an underhook as the opponent rushes in.

Stipe Miocic demonstrated one of the two key flaws of this style: Hunt’s so keen on the counter that said hook can be provoked by feints, leaving him open to punches as he tries to bring his hand back into position. Fabricio Werdum demonstrated the other: Hunt responds to level changes by slamming his hands down to sprawl. Fake a takedown and, as Kevin Randleman famously did to Cro Cop, you have a free shot on his face.

Luckily for Hunt, Lewis doesn’t have that sort of nuance to his game. His takedowns are inefficient things, brutally powerful but taxing, and his cage-long flurries have led him to run face-first into counters before. Plus, he shares Hunt’s cardio issues.

He only needs to get on top of Hunt once, of course, but his overaggression and lack of takedown setups will leave him at the mercy of Hunt’s counters.

Of all the unexpected runs the UFC has produced in recent years, Kelly’s remains the most surprising to me. He went from getting thrashed on The Ultimate Fighter to getting smashed to pieces by Sam Alvey to rattling off four consecutive upset victories. Sheer grit and solid Judo can only take him so far; the bubble has to burst sometime, right?

Brunson has all the tools to end this Cinderella run in violent fashion. He’s the heavier hitter, is clearly faster, has cleaner striking technique, and has the wrestling to dictate where the fight goes. It’s the fight IQ that’s got me worried; charging headlong at one of the division’s best counter-punchers in Robert Whittaker is the sort of gameplan that, were I his coach, would have me digging into both the medicine and liquor cabinets as soon as I got home.

Hopefully, that fight and his sleepwalking episode against Anderson Silva will revive the Brunson who took two rounds from Yoel Romero and scored four consecutive first-round knockouts. Kelly’s just too slow and too limited on the feet to overcome someone with Brunson’s toolset. If anyone could find a way to waste these advantages, it’s Brunson, but everything on paper suggests an early and authoritative finish.

Ross Pearson is 2-5 in his last seven fights and those two wins are by split decision. Does that seem weird to anyone else? It feels weird to me. It seems like just yesterday he was beating the snot out of Grey Maynard and being touted as one of the division’s best strikers.

That said, I’m not writing him off quite yet. Of those five losses, he got grappled to death twice (Even Dunham and Will Brooks), overwhelmed by a physically larger man twice (Francisco Trinaldo and Jorge Masvidal), and potshotted at range once (Stevie Ray). Hooker, at best, ticks one of those boxes.

“The Hangman” is tough, well-rounded, and game as they come, but there’s only so much you can accomplish when you neglect defense as much as he does. This is a guy who was getting countered repeatedly by Maximo Blanco, a man so wholly devoid of fight IQ he could get himself disqualified against a speed bag. Jumping back up to lightweight isn’t going to fix that.

Pearson is going to find him all night with rights to the body and his signature left hook. The only question is whether the judges will give him enough credit.

There’s really not all that much mystery around how this fight is going to go down. These two are going to charge forward and beat the daylights out of each other until at least one of them falls over. Brawls like this can often boil down to cardio and durability, both areas where Cutelaba has the edge.

Cutelaba proved in his last two bouts that he can push a torrid pace for all fifteen minutes, mauling with the same enthusiasm in the first minute as in the last one. Henrique, meanwhile, has been dropped hard in his UFC career and looked listless against Paul Craig.

He also looked helpless against Jordan Johnson, but Cutelaba’s not going to be chasing blast doubles all night.

Cutelaba’s fought three consecutive heavy hitters and none of them managed to dent him. Expect about a round and a half of quality action before Henrique’s gas tank runs dry.

Nguyen is everything you could want out of a prospect: charming, active on social media, and dynamite in the cage. He might be the single biggest puncher on the UFC flyweight roster and his grappling is nothing to scoff at, either.

That said, Elliott is a pretty damn toxic matchup. The man’s chin is absurd and he has the same sort of scrambling ability that Louis Smolka used to exhaust Nguyen last year with the added wrinkle of powerful takedowns.

Elliott is one of those guys who’s fun to watch and not fun to fight. Nguyen may be faster and more powerful, but Elliott’s going to get his hands on him eventually. From there, there’s only so long “Ben 10” can hold out.

Even beyond the meme of me latching onto JMMA fighters like a mother hen, I’m fond of Hirota. The man’s got balls of steel and solid boxing; to see him finally get a UFC win over Cole Miller was delightful.

So trust me when I say he’s screwed here.

Volkanovski is a tank of a man with strong wrestling and brutal ground-and-pound. “Pugnus” may be tough enough to take what Volkanovski dishes out, but I’m not sure he’ll be able to consistently stuff takedowns or get off his back. Worse, Volkanovski can go three full rounds, making one of Hirota’s customary late surges unlikely to turn the tables.

Part of being a fan is knowing your fighter’s limits. There are plenty of featherweights whom Hirota can beat, but Volkanovski is not one of them. “The Great” roughs him up from top position to take the decision.

Remember that MMAmania.com will deliver LIVE round-by-round, blow-by-blow coverage of the entire UFC Fight Night 110 fight card, starting with the Fight Pass “Prelims” matches online, which are scheduled to begin at 7 p.m. ET, and then the remaining undercard balance on FOX Sports 1 at 8 p.m. ET, before the main card start time at 10 p.m. ET, also on FOX Sports 1.