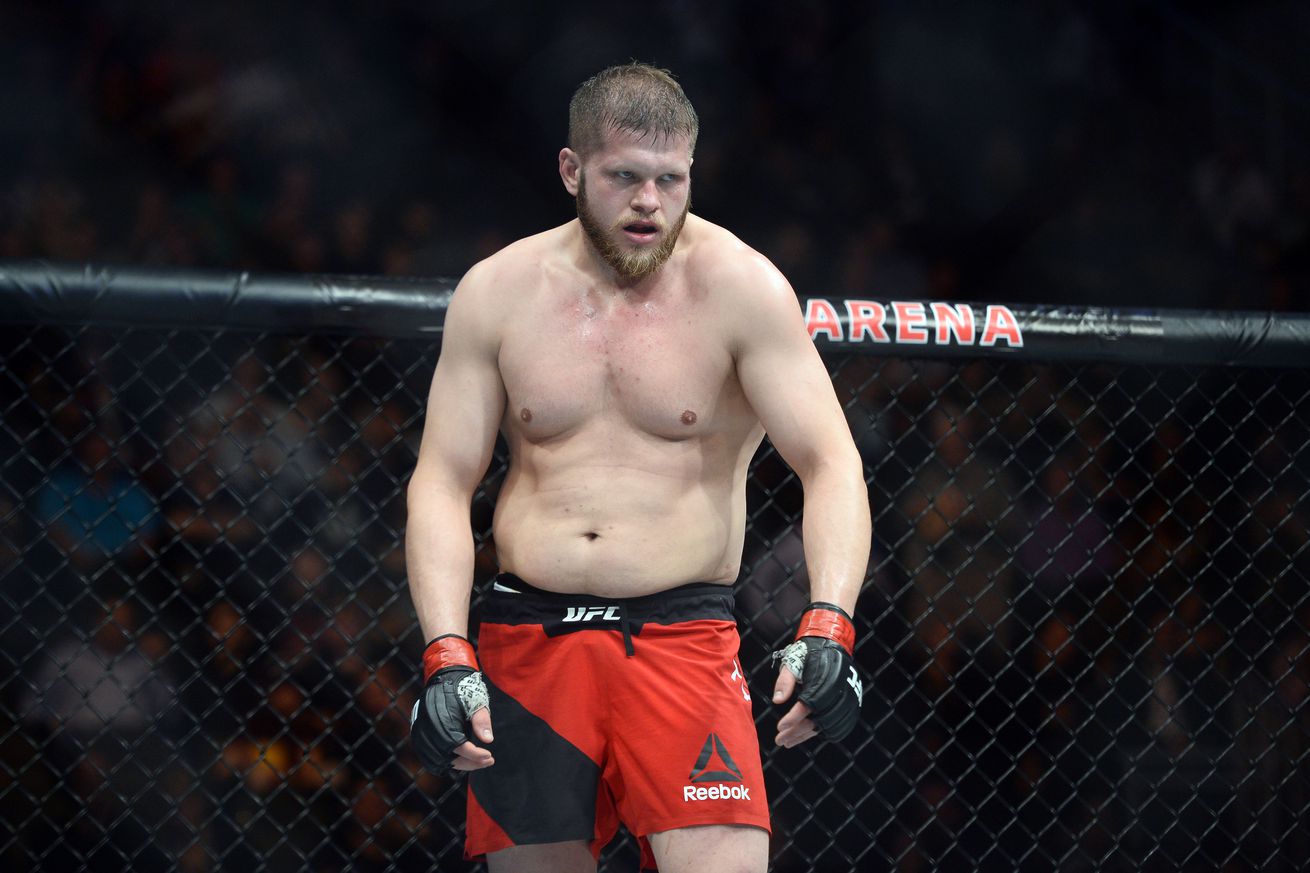 Long-time veteran and former Heavyweight champion Arlovski looked to get his career back on track after four straight losses, while Tybura looked for a signature win in the division.

Tybura opened with a leg kick. Andrei Arlovski landed a hard spinning back kick that pushed Tybura back. Tybura caught a low kick and took Arlovski down. Arlovski wrapped up both his arms, trying to avoid ground and pound. Tybura postured up, putting his forearm across Arlovski’s throat to create space to punch. Arlovski tried to push away and Tybura passed straight into mount. Arlovski scrambled but Tybura only solidified his position, sitting on Arlovski’s chest and landing hard punches. Arlovski gave up his back after a hard elbow and then went back to being under mount, taking a hellacious beating. He gives up his back again. Somehow Arlovski escaped and got back to his feet with 15 seconds left in the round, flurrying and landing hard punches on the feet as Tybura shelled up against the cage.

Arlovski opened the second round as he ended the first, flurrying on Tybura, before initiating the clinch, with an underhook and head pressure against the fence. They spent some time there in the clinch, until Arlovski broke away with a dangerous-looking combination. Arlovski nearly drove through on a takedown, but Tybura scrambled, and they ended in the same position as before, with Arlovski controlling Tybura against the cage. The referee broke the clinch with a minute left to go in the round. Andrei and Tybura exchanged punches, and Andrei pushed his way back into the clinch. He looked for a single-leg when he hears the ten-second clapper, then broke away with a punch instead.

Arlovski opened with a leg kick. Both fighters knew that this final round would likely decide the fight. Andrei missed with a spinning backfist and Tybura tried for a single-leg takedown against the cage, which Arlovski defended. Tybura managed to get Arlovski down for a moment. When Andrei worked back up, Tybura secured a double-leg, picked Arlovski up, turned away from the fence and slammed him on the canvas. Tybura tried to pass guard, but Arlovski managed to keep half guard. Arlovksi tried to get back to all fours and Tybura took his back, then gained the mount. He began dropping those heavy elbows again. Arlovski gave up his back, nearly created a scramble to gain top position, but couldn’t quite manage it. Tybura ended the fight in top position.

Tybura said in the post-fight interview that Arlovski is one of his biggest heroes, and that Arlovski hit him very hard at the end of the first round. When asked about his next opponent, he joked with interviewer Dan Hardy that he hears Dan Hardy is coming back to the Octagon, so he will wait for him. This likely spells the end for Andrei Arlovski’s UFC stint, with five straight losses.