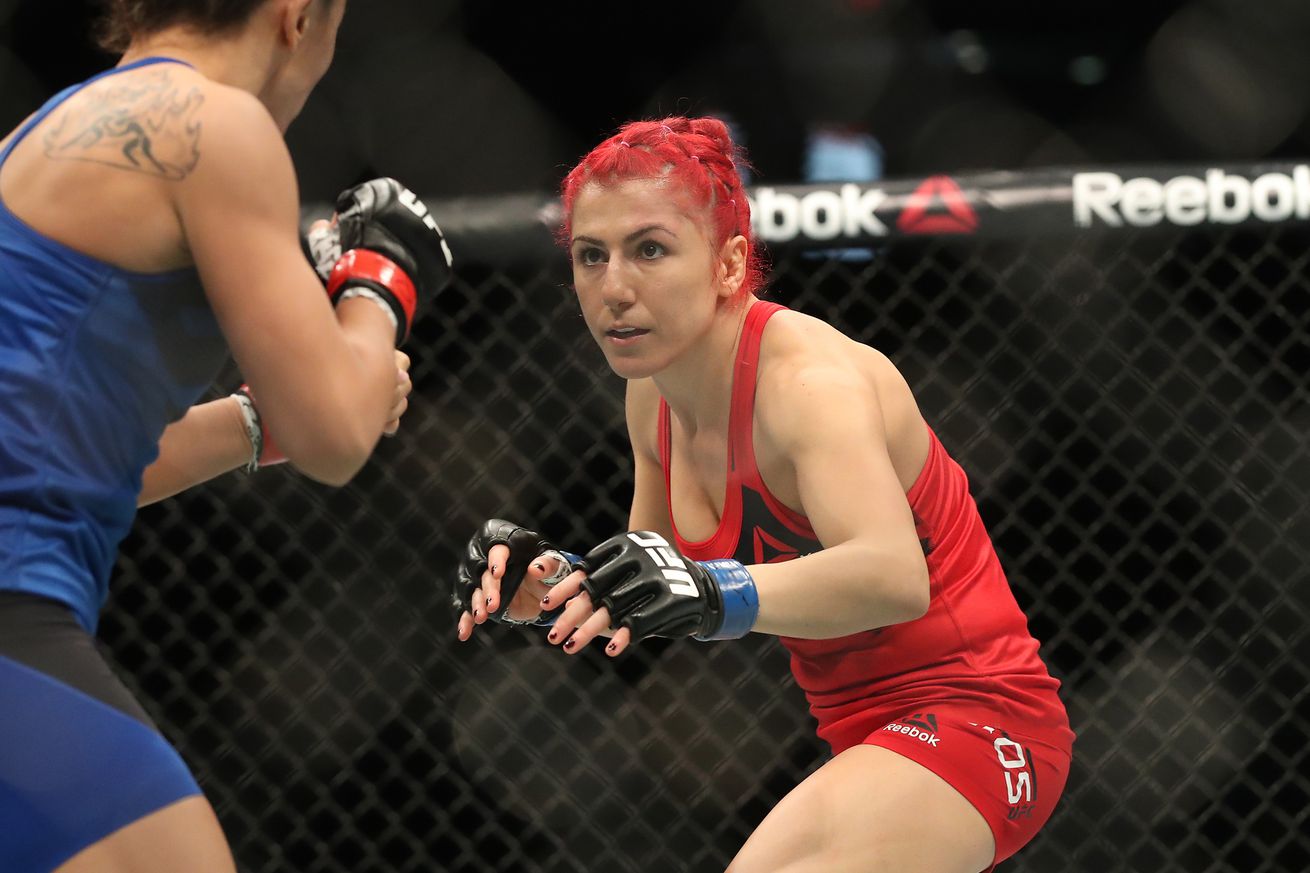 While Markos’ results have been consistent, her success has not been, as the Canadian grappler has alternated wins and losses in her six UFC fights. On the bright side, she did score the biggest win of her career last time out in a split decision victory over former champion Carla Esparza. On the other hand, Grasso was expected to be the next big thing. The 23-year-old racked up nine straight wins before coming up short at the veteran hands of Felice Herrig, and now she’ll attempt to bounce back from that defeat.

Let’s take a look at the keys to victory for each woman:

Plain and simple, Markos has to get this fight to the mat in order to win. She’s simply too hittable on the feet to deal with Grasso’s sharp boxing. On the bright side, though, most of Markos’ losses actually come when facing superior grapplers.

As she showed against Tecia Torres back on TUF, she can overwhelm strikers. That has to be the strategy here. Grasso is athletic and smart in regards to takedown defense, but she isn’t all that experienced. If Markos can chain takedown attempts together — both from shots and in the clinch — there’s a fair chance she can get on top and play her game.

Last time out, Grasso lost because she was too passive. Herrig isn’t all that threatening, but she is a tight striker. Grasso allowed herself to be pressured and slightly out-punched, even if she didn’t take much damage.

That could be a problem in the future, but Markos won’t fight that way.

Markos is not a measured athlete; she goes after her opponents a bit frantically, firing off looping punches, shooting for sometimes random takedowns, and causing wild scrambles. Against an opponent like that, Grasso will be forced to fire often, and her tight boxing will help ensure those strikes land.

One thing Grasso would be wise to do is target the mid-section. Markos pushes a crazy pace, one that often exhausts herself. If Grasso tacks on to that by digging into the body, it will go a long way in turning the tide late.

For Markos, she needs to put some wins together. Her upset over Esparza brought her from unranked to Top 10, but that was a close fight. If she loses here, that victory will look like more an exception than an indicator of her ability, and she’ll slip back down the rankings quickly. A win, however, helps prove that No. 9 position and will allow her to look up the ladder for her next foe.

Meanwhile, this is Grasso’s chance to prove that she’s one of the best in the world. She had a ton of hype behind her ahead of the Herrig bout and was a huge favorite. Grasso is still a favorite in the lead up to this fight, but if she’s going to live up to expectations, the Mexican athlete desperately needs this win.

All that said, her career isn’t over with a loss. Grasso still has plenty of time to develop at 23 years old, so even if she’s not a top fighter now, she still may be in a few years.

At UFC Fight Night 114, Randa Markos and Alexa Grasso will square off in the co-main event. Which athlete will have her hand raised?