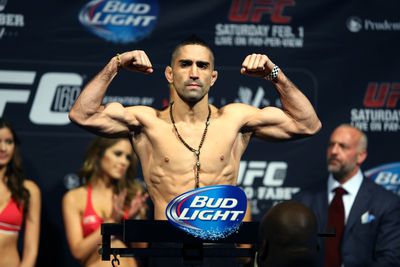 “The Bully” aims to turn back “The Nightmare in the latter’s featherweight debut south of the border and also discusses the upcoming high-profile tilts between Jose Aldo vs. Conor McGregor, and Frankie Edgar vs. Chad Mendes.

Their FOX Sports 1-televised co-main event materialized after “The Nightmare” called out “The Bully” last May, looking for an Octagon dance partner for his eventual Featherweight debut.

Lamas, 33, is coming off of a disappointing technical knockout loss to former No. 1 contender Chad Mendes back in April, marking the third time the MMA Masters representative was felled by strikes. Since then, the Chicago, Ill., native welcomed a baby boy Abel to the family, while keeping tabs on the division from afar.

He recently spoke with MMAmania.com about the Mendes loss, “Money’s” next fight against Frankie Edgar, Jose Aldo vs. Conor McGregor, Sanchez and much more.

Tell us about what’s going on in your life since April. Have you been ….View original article