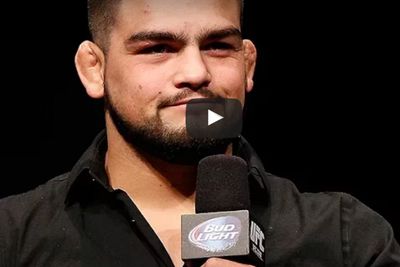 Once UFC Fight Night 78: “Magny vs. Gastelum” comes to a close later tonight (Sat., Nov. 21, 2015) check out the LIVE post-fight press conference video stream above from Arena Monterrey in Monterrey, Mexico, featuring an international company executive and all the other important mixed martial arts (MMA) players.

Immediately following the promotion’s most recent trip “South of the Border,” a handful of notable fighters such as Magny, Gastelum, Ricardo Lamas, Diego Sanchez and Henry Cejudo, among others, will be on hand for the UFC Fight Night 78 post-fight press conference, which is now embedded above for an approximate 2:30 a.m. ET start time.

Be sure to catch the post-fight reactions from all the major players, as well as up-to-the-minute results of all the UFC Fight Night 78 post-fight bonuses, including “Fight of the Night” and the other “Performance of the Night” awards.

The UFC Fight Night 78 post-fight presser video replay will also be available above for those who ….View original article