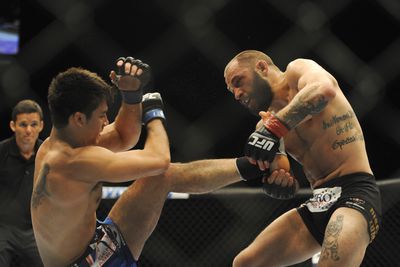 Doo Ho Choi and Sam Sicilia will scrap this Saturday (Nov. 28, 2015) at UFC Fight Night 79 inside Olympic Gymnastics Arena in Seoul, South Korea. In a match up of power punchers, what adjustments must be made for either man to claim victory? Find out below!

Choi is one of the best 145-pound prospects around, living up to the hype in his Octagon debut with an 18-second knockout victory. Though injuries have kept him out of the cage since, Choi will look to remind fight fans of his potential with another big win in front of his home crowd.

Meanwhile, Sicilia has finally found some consistent success inside UFC. He’s won three of his last four and now has the opportunity to take another big step forward by defeating a top prospect.