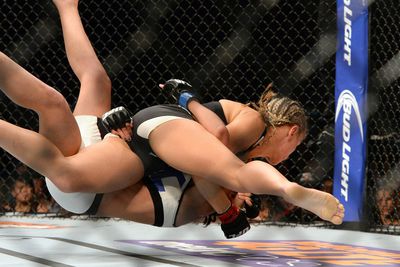 This Thursday evening (Dec. 10, 2015), the 21-year-old will compete in her first-ever main event opposite fellow young gun “Thug” Rose Namajunas, who steps in on short notice to replace the injured Joanne Calderwood, at UFC Fight Night 80, which will emanate from inside “The Cosmopolitan” in Las Vegas, Nevada.

VanZant — whose age prevented her from joining the division’s elite on The Ultimate Fighter (TUF) 20 — has earned four wins since a Jan. 2013 loss to Tecia Torres, three of them in UFC proper. She’s certainly on a hot streak, but it remains to be seen whether she can become the breakout star UFC desires.

Let’s see if we can’t figure it out:

At range, VanZant’s striking ranges from adequate at-best to a liability at-worst. For the most part, ….View original article