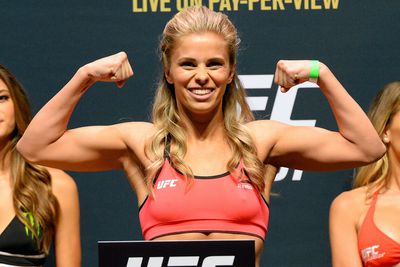 Can Paige VanZant continue her hot streak in Vegas?

Ultimate Fighting Championship (UFC) is set to put on three outstanding events back-to-back-to-back this weekend, and the action begins this Thursday (Dec., 10, 2015) as “The Chelsea” at The Cosmopolitan in Las Vegas, Nevada, plays host to the UFC Fight Night 80: “Namajunas vs. VanZant” event live on UFC Fight Pass.

With a ton of mixed martial arts (MMA) action coming your way, why not up the ante by playing Fantasy MMA with Kountermove?

If you are not familiar with how Kountermove works, here is what you need to know:

In Kountermove you build a team of five fighters utilizing a “salary cap” of $25,000 in fantasy money to spend on drafting the team you expect to perform the best on fight night. If your team performs well enough, you will likely have a share of cash prizes in any number of Kountermove’s games.

Points* are scored with finishes, significant strikes, knockdowns, takedowns, dominant positions, and submission attempts. The more dominant your fighters’ performance is, the more points you’re going to score. For a detailed breakdown of how the scoring works, click here.