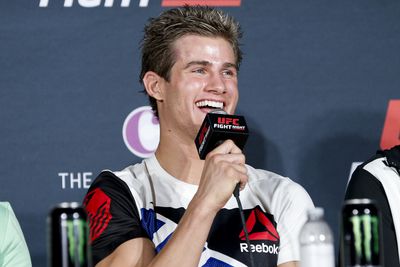 The UFC sold UFC Fight Night 80 as the ‘Sage and Page show,’ and as Conor McGregor would say, that promotion was reflected in the numbers. Northcutt handily lead the event’s disclosed post-fight payroll, pocketing $80,000 for his stoppage of Cody Pfister in just his second UFC fight, according to information released by the Nevada Athletic Commission.

The 19-year-old Northcutt overcame early adversity to submit Pfister ($12,000) with a guillotine choke just 41 seconds into the second round on Thursday’s main card. The performance followed a dazzling 57-second UFC debut, which earned Northcutt a sizable salary increase compared to most fighters heading into their second fight under the Zuffa umbrella.

Of note, newly minted free agent and top-five banatmweight Aljamain Sterling earned $28,000 for his victory over Johnny Eduardo, which was buried deep on the undercard of the show.

In addition to their NAC-reported salaries, Namajunas, Jim Miller, Michael Chiesa, and Tim Means all scored $50,000 fight night bonuses for their performances.

A complete list of the UFC Fight Night 80 salaries can be seen below. As always, these figures do not represent a fighter’s total earnings, as certain sponsorship incomes or discretionary post-fight bonuses are not publicly disclosed.