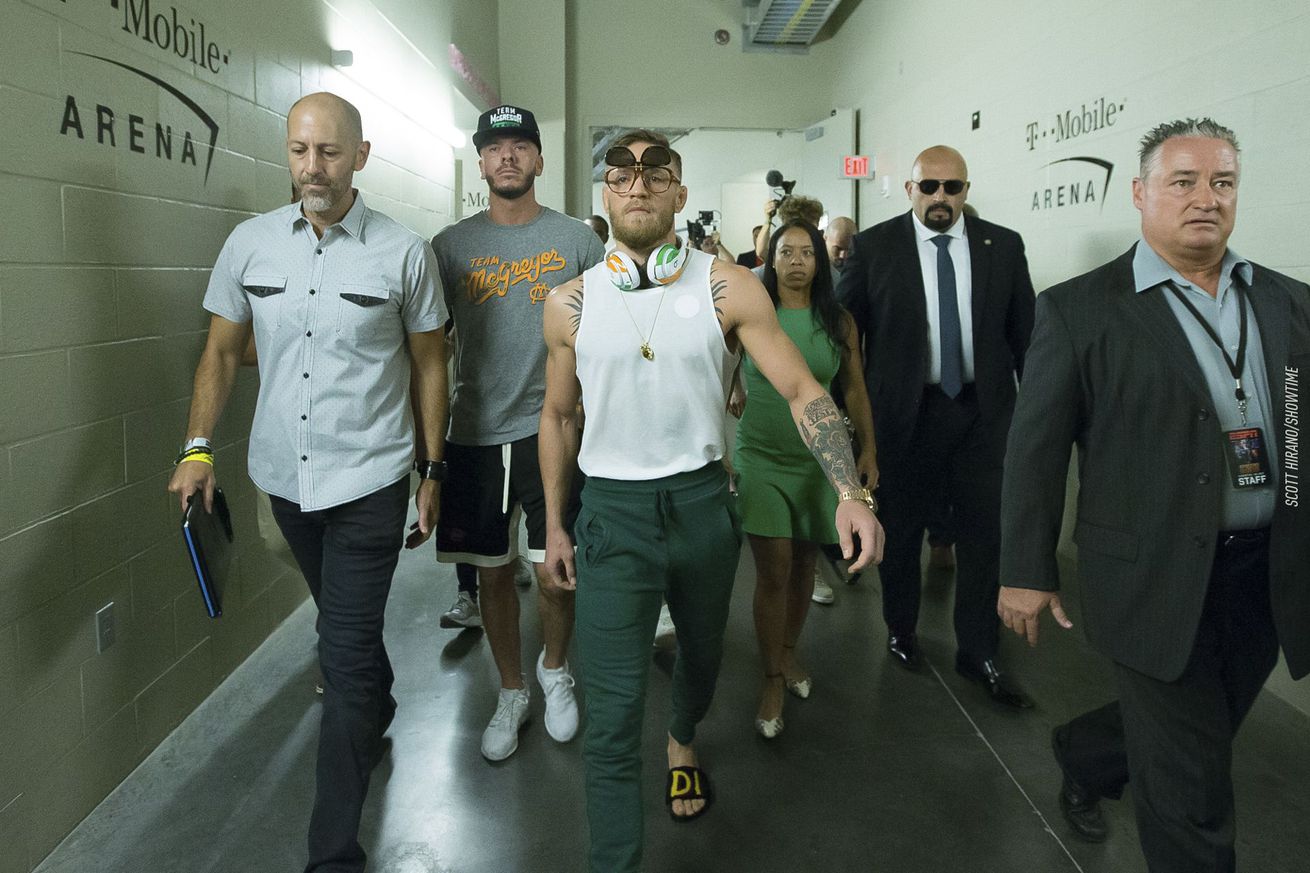 LAS VEGAS — Tony Ferguson is unconvinced that Conor McGregor won’t fall back on his traditional ways Saturday night against Floyd Mayweather at T-Mobile Arena. If things start going sideways for “The Notorious,” Ferguson thinks we could see some things that would be very illegal in the sport of boxing.

“We might see Conor do something stupid on accident if he panics,” the UFC lightweight contender said at a UFC media day Thursday at the UFC corporate campus. “You know what I’m saying? He might throw an elbow or he might headbutt or he might do something, like he doesn’t realize. You’re in the middle of a fight, you’re in a war. You’re not gonna say anything. What’s his number one sport? MMA. So I mean, that being said, point taken here is shit can happen. It’s a fight.”

McGregor, the UFC lightweight champion, has no professional boxing experience whatsoever and he’ll enter the ring just a few hours from now against Mayweather, one of the greatest of all time. Mayweather is 49-0 and a tough riddle to solve. Most boxing pundits would describe him as the best defensive boxer of all time.

So how does McGregor crack that steel curtain defense and evasive maneuvering? Maybe by not actually boxing at all, according to top UFC flyweight contender Ray Borg.

“I think actually trying something different is the only little advantage that he has,” said Borg, who challenges Demetrious Johnson for the 125-pound belt at UFC 215 on Sept. 9 in Edmonton. “I think if he can throw off the orthodox movement of a straight boxer, I think that’s the only thing that can give Mayweather problems. Bouncing around like an MMA fighter, cutting angles, doing his dancing tactics, whatever he needs to do, because boxing is a very still sport. There’s not a lot of movement, not a lot of flashiness other than guys coming like [Vasyl] Lomachenko and people like that.

“So if he can somehow incorporate his MMA movement and style into his boxing fight, that could be the only thing that saves him.”

Ferguson also brought up dancing. He said if he were facing a boxer, he’d go wild, get inside and attack — to the body and everywhere else — with recklessness right away. Then he’d lay back, dance and taunt to piss off his opponent if that failed. It’s going to be all about McGregor’s feet and cardio, Ferguson said.

“Everybody thinks the conditioning in boxing has to do with your arms,” Ferguson said. “What’s the first thing to go? It’s your legs. And when your legs go, what happens? [Your arms] start to drop. Now, like I said, if Conor did his punching on his bag and he didn’t do all the rest of the conditioning with it, like I said, boxing is a completely different animal.”

Johnson, the UFC flyweight champion, said he would need to try and get Mayweather to overextend to land the big shot. Distance control would also be an important part of the strategy, “Mighty Mouse” said.

“Mayweather is not a high-paced, pressure fighter,” said Johnson, who is considered the best pound-for-pound MMA fighter in the world. “Neither is Conor McGregor when he doesn’t want to be. Conor McGregor has the range factor, he can walk him down and then hopefully be able to land that shot that’s gonna make a difference. My only thing is I don’t want Conor going in there and thinking that he just needs to land that shot. He needs to put combinations together and make every punch he throws count. Because if he throws a thousand punches and only 10 of them land, 990 of those punches are gonna count against him.”

Kevin Lee, who is fighting Ferguson at UFC 216 in Las Vegas for the interim lightweight title, has some insight into both McGregor and Mayweather. He trains at the UFC Performance Institute, where McGregor has taken up shop over the last six weeks preparing for Mayweather. And Lee has also done some training at Mayweather Boxing Club.

“I think [McGregor] did actually approach the fight the right way,” Lee said. “I think he did the right thing about not bringing out a boxing trainer, because a boxing trainer is going to tell him that everything that he does is wrong. And it’s gonna kill him. He could have had somebody, I don’t know. He’s got a bunch of yes men around him, it seems like. He’s kind of going into that Rocky 3 thing where it’s like a circus every time he trains, he’s got the kids, he’s out there partying and shit. He probably could have dialed that back a little bit.”

Valentina Shevchenko, who challenges Amanda Nunes for the UFC women’s bantamweight title at UFC 215, is hoping McGregor somehow pulls it off despite the long odds. And she thinks he will.

“It’s a thin line between being a fan and supporting a fighter,” Shevchenko said. “And I support fighters. I support Conor McGregor. And the fan, it’s like you don’t want to see the reality, you want to keep going with your hero. It’s a different story. But I’m really supporting Conor McGregor, because I believe he can do this victory, he can take it. He can do things unbelievable for all the world.”

Johnson, too, is in the camp that McGregor really does have a legitimate chance of emerging victorious Saturday night and pulling off the upset of the century.

“I think he has a good opportunity to win this fight if he can land that shot,” Johnson said.

Lee is not quite as bullish, despite his positive opinion on McGregor’s preparation.

“I do like the approach to the fight, it’s just a tough mountain to climb,” Lee said. “You’re talking about 20 years of experience versus zero. I mean, shit. What can you do? In six weeks, bro you can’t do much.”

Meanwhile, Borg was pretty concise and earnest in his prediction. He’s giving McGregor a chance, but that’s about all.