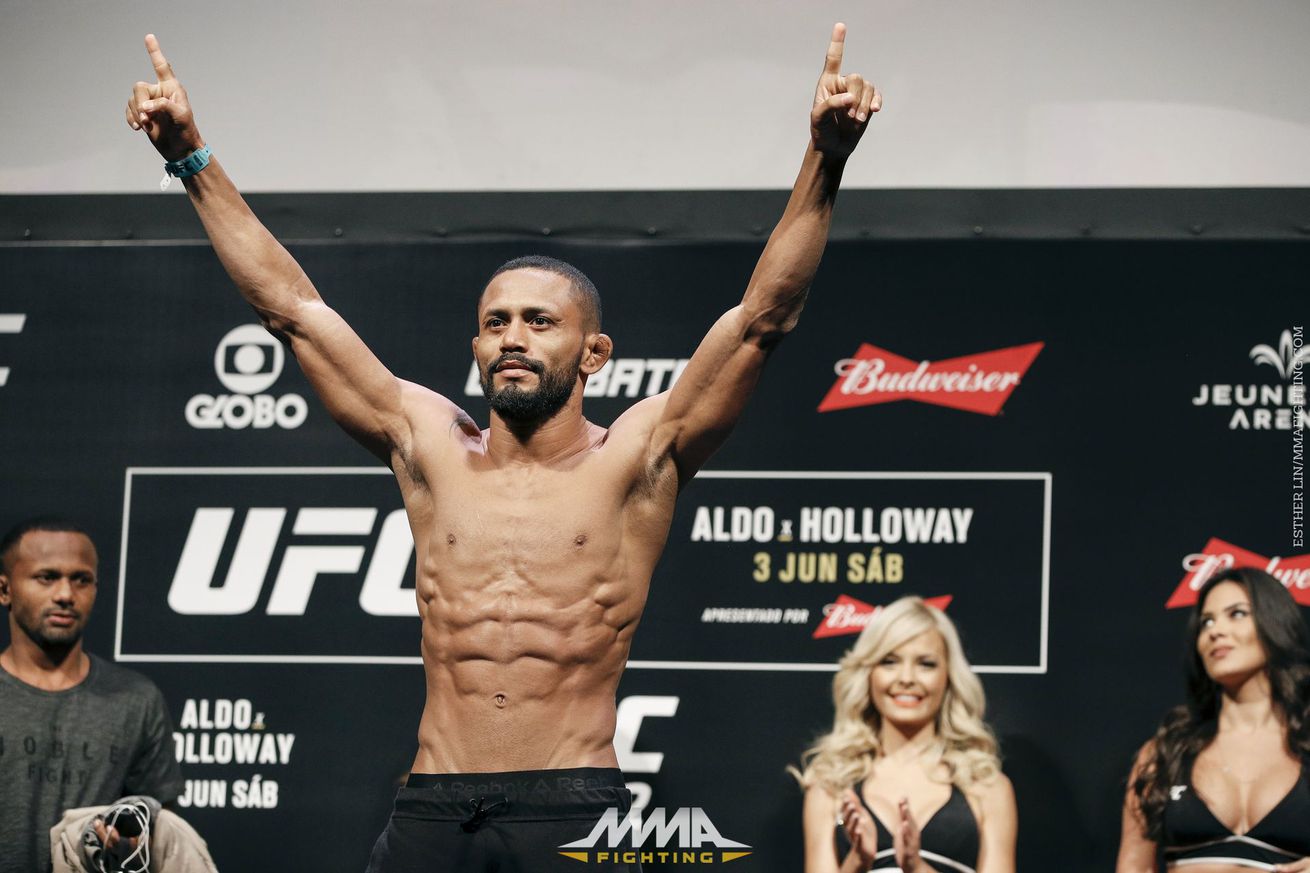 RIO DE JANEIRO, Brazil — Deiveson Figueiredo will walk to the Octagon for the first time Saturday night, but he’s already a winner outside the cage.

Born and raised in Soure, a small city located 2,000 miles away from Rio de Janeiro, Figueiredo always enjoyed fighting, but it took a while for him to realize he had a future in it.

“I wasn’t focused, I wasn’t professional,” Figueiredo told MMA Fighting. “I have a different mindset now. I got older and evolved. You have two paths in life, you either get better or get worse, and I believe I got better, thank God. I’m a family man now, and I live for the things I love: training and fighting.”

Figueiredo, an unbeaten MMA fighter with a 11-0 record, now makes his Octagon debut versus Marco Antonio Beltran at Rio de Janeiro’s UFC 212. Ahead of the big day, he detailed how his life was before becoming a full-time athlete.

“I liked partying, drinking a few cachaças once in a while, and now I’m a completely different man,” Figueiredo said. “I liked partying at night when I lived in Soure. When I moved to Belem, a big city, that’s a whole different reality. You have to mature.

“My parents split and you look to your family going through tough times, you get real. I decided I wanted to go to the big city to give my family a better life. I’m in the UFC now, and I want to give them a better life. I live for the sport.”

Figueiredo moved to Belem, the capital of Para, a couple of years before competing in MMA for the first time, training with UFC lightweight Michel Prazeres. Three years later, Deiveson returned to Soure to train at another gym owned by a UFC talent, Iuri Alcantara.

“He’s my master and taught me everything I know in the fight world,” Figueiredo said of Alcantara, who meets Brian Kelleher at UFC 212. “Now we’re fighting in the same card. The student and the master. That’s really cool. I’m so happy.”

“Our team is our second family, we’re always take care of each other,” he continued. “I’m unexperienced and I always ask him if everything is okay, what I should to do, and having him there with me will help me a lot.”

Figueiredo, also known as “God of War,” makes his UFC debut after racking up a perfect record in the Brazilian circuit. He had chances to fight for other international promotions before, but he decided to stay loyal to Jungle Fight promoter Wallid Ismail, who is also his manager.

“I always wanted to sign with the UFC, and I kept getting offers from managers saying they would get me there,” Figueiredo said. “Wallid Ismail was always my manager and he showed my work to the UFC and they liked me, and now it’s time to go for it, put on a show for the entire world.”

According to Figueiredo, other agents reached out to him with offers from Russia, but he turned them down immediately.

“They contacted me with a lot of promises, saying they would get me fights in Russia,” he said, “but Russia is destroying Brazilian fighters. Guys go there to fight and get screwed.

“Here in Brazil, we work for opportunities to fight in a promotion to change your life. My dream was always to fight in the UFC, and thank God I got it. I’m happy about it It was a long, tough road to get here, my life wasn’t easy, but now I have the chance to change my life 100 percent.”

With only one decision win in his impeccable record, Figueiredo predicts a stoppage victory in the big league.

“I have to use my jiu-jitsu, but my boxing is also sharp and I believe in my hands,” Figueiredo said. “I know he will go down if my hand lands. I know I can knock him out. When I put my hands on him, it will be for the knockout. I can’t wait to fight. I want to finish him and win in the first round.”