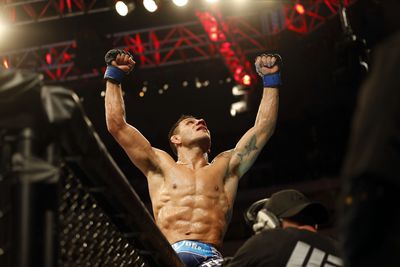 Rafael dos Anjos and Donald Cerrone will rematch TONIGHT (Dec. 19, 2015) at UFC on FOX 17 inside Amway Center in Orlando, Florida. In a match up of knockout strikers, what adjustments must be made for either man to claim victory? Find out below!

Dos Anjos is in the midst of an incredible string of wins. In his last three fights, he’s faced some of the world’s best — including former champion Anthony Pettis — and not only did dos Anjos win, he never lost a round.

Similarly, “Cowboy” is on the hottest streak of his career. It took an eight fight win streak to earn him this opportunity, and Cerrone’s striking has never looked better. Now, he has the chance to avenge his most recent loss and become champion with a single victory.

In dos Anjos’ victory over “Cowboy,” he did an excellent job mixing together his attacks. Early on, dos Anjos push towards Cerrone and stunned him with punches after going low with some punches and coming up high. Before long, dos Anjos switched it up and instead scored a takedown, allowing him to control and punish ….View full article