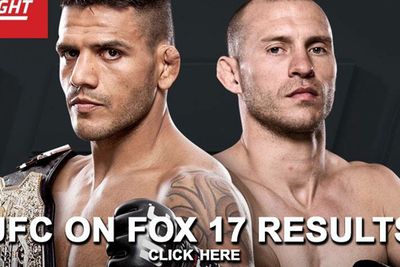 Lightweight champion, Rafael dos Anjos, will attempt to make his first 155-pound title defense again Donald Cerrone, who he previously defeated via unanimous decision back in Aug. 2013. “Cowboy,” though, has been perfect (8-0) since that setback and has never looked better.

In the co-main event of the evening, hard-hitting Heavyweight contenders Junior dos Santos and Alistair Overeem will finally settle their score after years of trash talk and missed opportunities. Nate Diaz will also return to action after an extended self-imposed hiatus, taking on Michael Johnson in a meaningful 155-pound scrap.

MMAmania.com will deliver LIVE round-by-round, blow-by-blow coverage of the entire UFC on FOX 17 fight card below, starting with the Fight Pass “Prelims” matches online, which are scheduled to begin at 3:30 p.m. ET, and then the remaining under card balance on FOX Sports 1 at 5 p.m. ET, before the FOX main card start time at 8 p.m. ET.

Many of our readers check-in before, during and after the televised fisticuffs to share their thoughts on all the exciting action. Therefore, feel free to leave a comment (or 17) before you split and chat with all the other Maniacs during the show — it always turns out to be a great discussion.

Keep in mind that we will also be the spot for the latest news, recaps and post-fight analysis after “dos Anjos vs. Cerrone.”