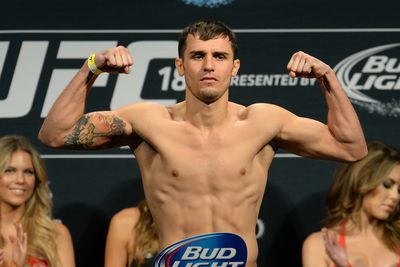 “Fury” talks with MMAmania.com about the reason behind his drop to the Featherweight division, how his body is taking it, as well as what he has planned for “Do Bronx” on Sat., Dec. 19, 2015.

“Cowboy” proved to be too big of a threat in every sense of the word, and although “Fury” had a bit of success on the feet in the second round, the former was superb in his takedown defense, as well as in his manhandling of the latter on the ground.

“He was a bigger lightweight and [when] you face those guys in the Top 5, a lot of those guys are pretty big dudes. Getting to that level, I definitely felt a different in the size,” Jury explained to MMAmania.com. “A loss makes you reevaluate things. My main goal is getting towards a belt.”

The loss ended a 15-fight win streak on part of Jury (5-1 UFC), where he picked up victories over Takanori Gomi, Diego Sanchez, and Michael Johnson.

After Jury’s co-main event with Cerrone at the UFC 182 pay-per-view (PPV) back in January (recap), the 27-year-old made the decision to drop to featherweight in August.

Jury would need to reign in his diet after previously “eating whatever” he wanted during this three-year tenure in the 155-pound division. As a result, The Ultimate Fighter (TUF) 15 contestant called upon the services of nutritionist to the MMA stars, George Lockhart.

“The quality of foods I’m getting are a lot better,” Jury said. “I’m eating eight times a day. I’m taking BCAA’s. I’m taking the right amount post and during workout. I’m getting leaner.”

But making the choice to watch what ….View full article