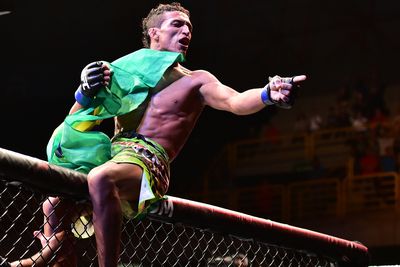 More fights are coming to Fight Pass and FOX Sports 1 this weekend (Sat., Dec. 19, 2015) when UFC on FOX 17: “Dos Anjos vs. Cerrone” kicks off from Amway Center in Orlando, Florida. MMAmania.com’s Patrick Stumberg continues the UFC on FOX 17 “Prelims” party with the second (and final) installment of two-part undercard preview series.

Ultimate Fighting Championship (UFC) belts have been rather slippery recently, and Rafael Dos Anjos is out to buck the trend.

This Saturday night (Dec. 19, 2015) inside Amway Center in Orlando, Fla., the Lightweight champion will put his 155-pound title on the line for the first time against former foe Donald Cerrone — who has beaten eight opponents since losing to “RDA” in 2013 — in the main event of UFC on FOX 17.

We’ve still got six undercard “Prelims” fights to examine, all on FOX Sports 1 (check out the first three on Fight Pass right here), so let’s not waste time.

Consecutive losses to Cub Swanson and Frankie Edgar gave way to a four-fight win streak for Charles Oliveira (20-5), capped off by a guillotine finish of Nik Lentz. This set up “do Bronx” for a pivotal contender fight with Max Holloway, where the Brazilian unfortunately suffered a freak esophagus injury in the second minute.

He has submitted 12 opponents and knocked out six.

Though he lost to Al Iaquinta on The Ultimate Fighter (TUF) 15, Myles Jury (15-1) began his UFC career with six straight wins, becoming the first man to ever stop Takanori Gomi with strikes ….View full article