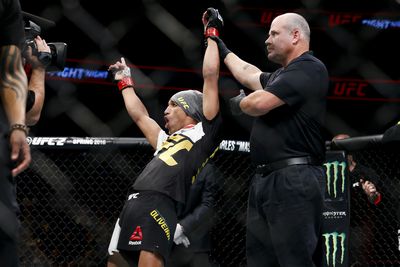 When Charles Oliveira is able to impose his submission game on his opponents, there are few who can stop him at 145 pounds.

Myles Jury became the latest to find this out on Saturday night.

The fighter nicknamed “Do Bronx” needed just 3:05 to finish Jury on Saturday night, using a wicked guillotine to earn the victory at UFC on FOX 17 in Orlando.

The victory is was Oliveira’s eighth via submission, which ties him with Nate Diaz and Frank Mir for the most submissions among current UFC fighters.

“I respect all the fighters in the UFC and this division,” said Olivera, who missed weight by four pounds for the bout. “But when it comes to the 145 division, I believe I have the best jiu-jitsu.”

The win was the fifth in his past six bout. The only loss in that span was when he suffered a fluke injury to his esophogus in a loss to Max Holloway in August.