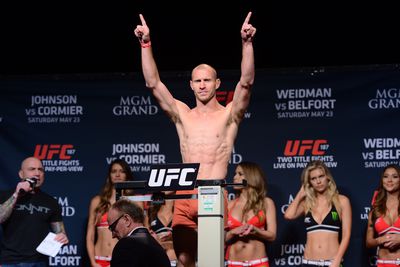 If you know anything about Donald Cerrone, you know he likes to do everything big.

Whether it’s going all out inside the Octagon, fighting any chance he gets or taking on one spine-tingling adventure after another, “Cowboy” is an adrenaline junkie.

Just look at his epic fight ranch — which is still under construction in New Mexico — and it’s easy to understand just what kind of personality the talented striker possesses.

“This is a serious work in progress. These are 12-hour days while training three times a day. I just figured if I get these guys out here to train for eight weeks, they need their own independence and their own place to stay, man. Living on a couch, you can’t do it, man. These world class athletes. So, I built, everyone has got their own bathrooms, bedrooms. They are like hotel rooms.”

Of course, Cerrone is still a full-fledged member of Jackson Wink MMA Academy in Albuquerque, N.M., but it’s nice to have a spot a few steps away if you feel the urge to get in a late night training session.

“Cowboy” will next step foot inside the Octagon this Friday night (Dec. 19, 2015) when he faces off against Lightweight champion Rafael dos Anjos in a five-round championship fight at UFC on FOX 17, which is set to go down in sunny Orlando, Florida.

For more on that star-studded event — which also features a Heavyweight showdown between Alistair Overeem and Junior dos Santos — click here.