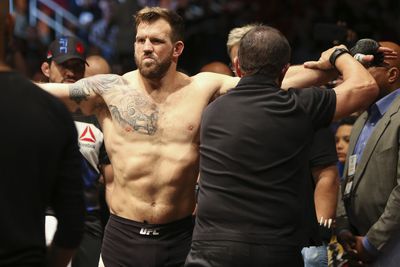 Not only does he have to defeat “Rumble” in the main event of UFC on FOX 18 on Jan. 30, 2016 inside Prudential Center in Newark, NJ (details), but he may have to do it in impressive fashion in order to finally get his shot at the light heavyweight strap.

Johnson isn’t the type of fighter you want to stand toe-to-toe with in hopes of getting a knockout victory. It’s something that’s not lost on “Darth,” as he declared on The MMA Hour that he will be out to his opponent at all costs.

Even if it means taking the Daniel Cormier approach:

“I feel like its damned if you damned if you don’t kind of scenario here. Because you go out and fight Johnson, you know what he has. He is explosive and he hits hard, especially in the first round, he is going to come out blazing. Me fighting him any other time, or any time, really, the game plan would be to go in there and do what Cormier did to him. I’m on him, taking him down. If I don’t finish him, then it ….View original article