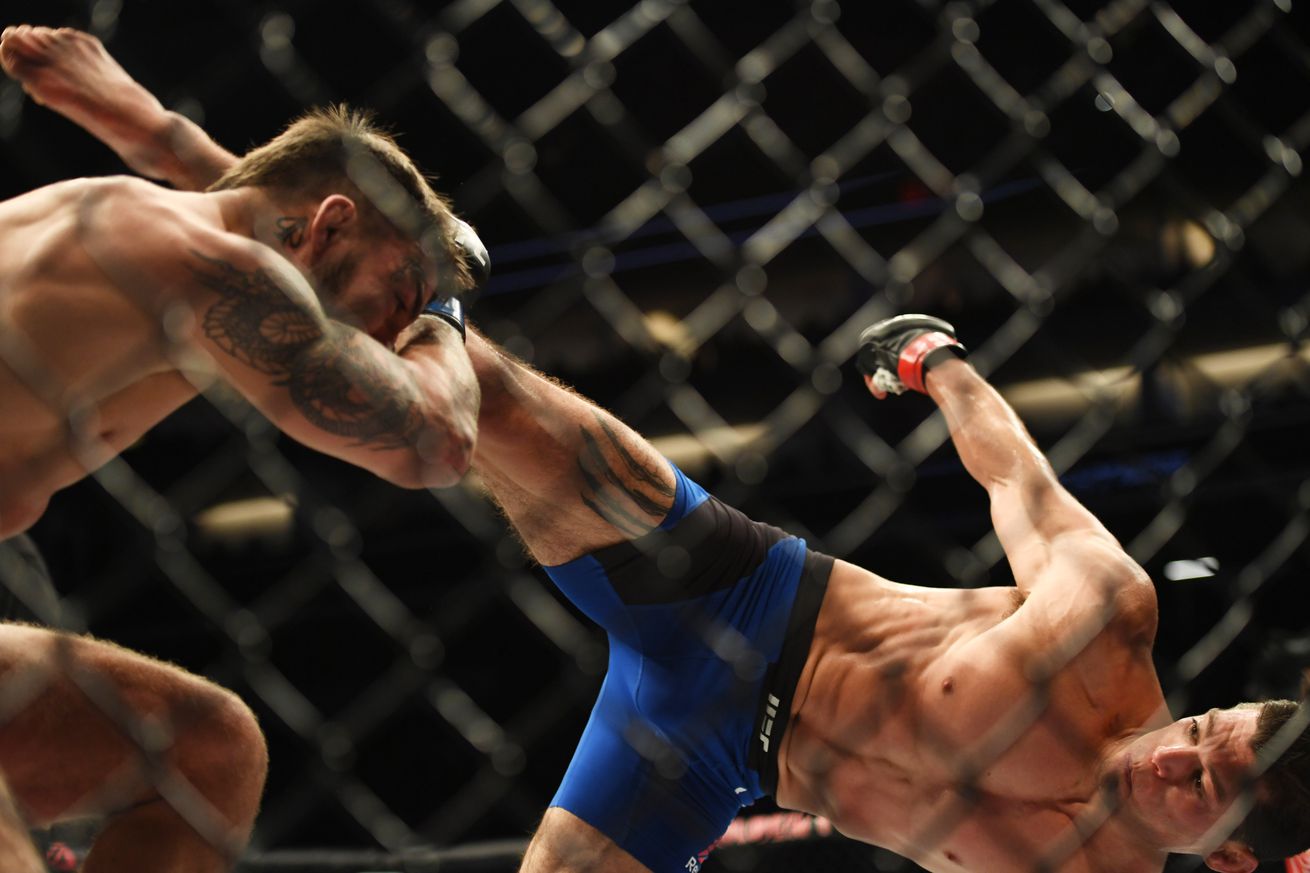 Jouban has seen his fair share of ups-and-downs inside the Octagon, but the factors of excitement and violence have remained consistent. Last night, Jouban was looking to bring the pain while extending his win streak to three

Meanwhile, Perry is one of the most interesting prospects in the UFC, a two year pro with a habit of brutally knocking out opponents far more experienced and — on paper at least — likely to succeed than himself. Perry was climbing the ranks quickly, and Jouban was just another obstacle for the knockout artist.

Instead, Jouban took it to him.

A lot went down in the opening round. It was Jouban who landed first, cracking his foe with some solid counters and digging some body kicks. Perry continued to stalk his foe and wait for opportunities, but Jouban changed things up with a double leg attempt.

However, the veteran was unable to keep his man down. Back on the feet, Perry began to find his range and land some hard blows, but Jouban still kept up a higher volume of strikes.

It was a very competitive round.

Jouban stuck to the script to begin the second round, jamming Perry’s advance with low and body kicks. Both men were slowing a bit, but Jouban was able to more effectively play his game plan and avoid the brawl.

Furthermore, Perry’s volume dropped quite a bit in the second. He didn’t seem all terribly gassed, but Perry was waiting too much and refusing to really commit to his combinations.

A brief knockdown from Jouban sealed the round in his favor.

Perry needed a huge third round to have any chance, but he never managed to make anything happen. His opponent’s range was too much, and Jouban remained too disciplined.

He simply kept feeding his foe kicks and straight lefts.

Worse still, Perry’s volume dropped even further. He threw very few punches, which is the last thing a fighter in need of a comeback should be doing. Instead, Jouban was able to circle and kick freely to a unanimous decision victory.

Jouban fought with a great game plan and followed it strictly. He was never sucked into punching exchanges, and he gave his opponent few opportunities to land because of that discipline.

Additionally, Jouban’s kicks really broke his foe down. He began chopping at the body and legs immediately, and it had a huge impact. By the end of the bout, Perry was far more timid and sore from all the abuse.

He took some shots, but he earned a clear win over a tough prospect. Hopefully, he’ll receive a step up in competition thanks to his current win streak.

As for Perry, this is definitely a tough loss. He landed some seriously hard punches in the opening round, but he was unable to build upon that success. In the second half of the fight, the power puncher was simply too hesitant from all the shots his opponent had landed.

The bright side here is that a loss to a veteran like Jouban was undoubtedly in his immediate future. Perry is a great talent with smart instincts, but he’s still a very raw and inexperienced fighter. He’s been fighting a shockingly high level of opponent considering his short career, and a loss like these should help the Michigan-native grow tremendously.

A match up with a fellow up-and-comer would make sense for Perry’s next bout.

For complete UFC on FOX 22 “VanZant vs Waterson” results and play-by-play, click HERE!