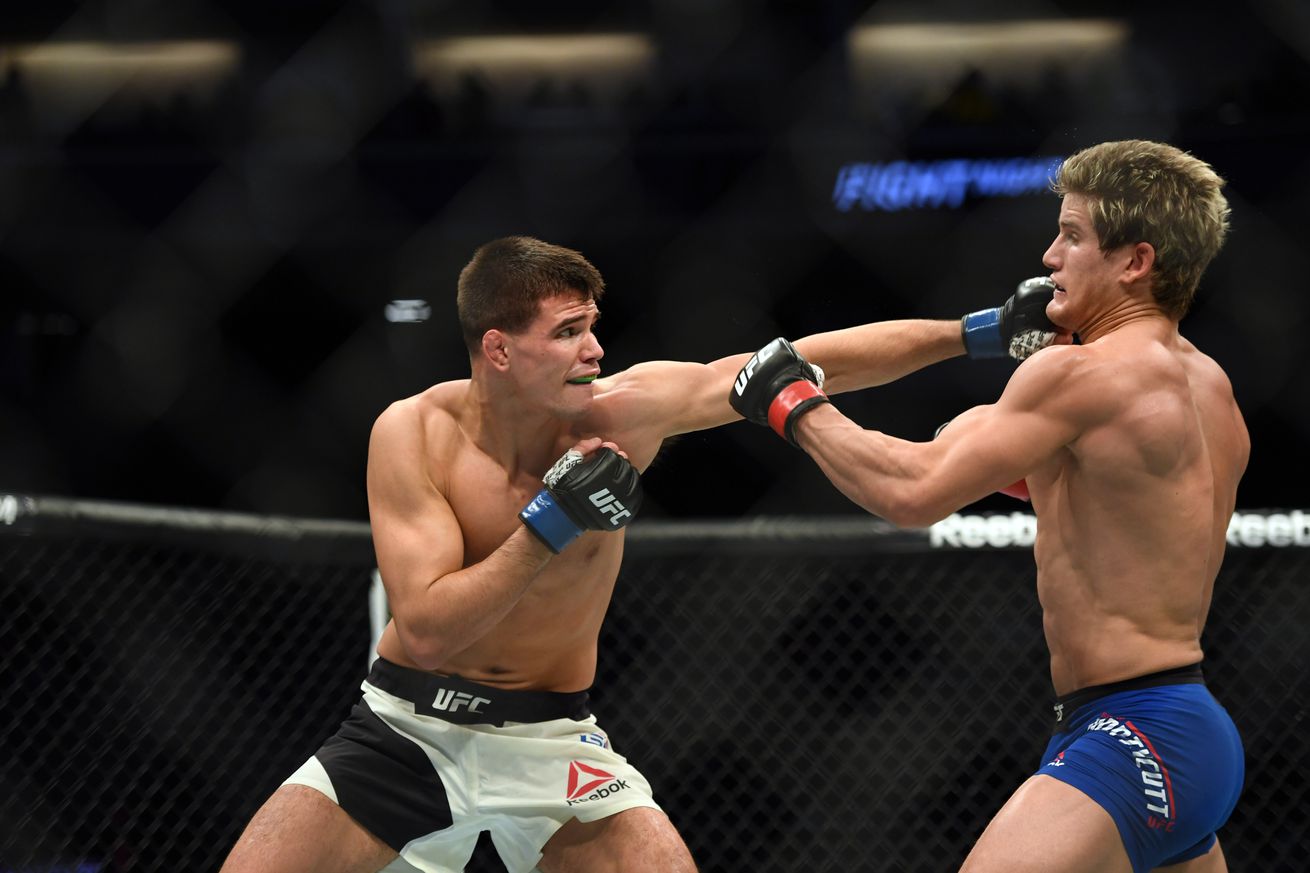 Northcutt came into last night’s bout in an odd position. Most important, Northcutt had won more of his fights than not. However, his performances were shaky at times, and his competition was far from the best. In short, the mixed martial arts (MMA) world was unsure where the 22-year-old truly stood.

In a similar situation was his opponent, Gall. Undefeated with a trio of first round submissions sounds nice, but each of his opponents was a debuting athlete. Basically, everything was up in the air heading into this bizarre co-main event, but both men were motivated to prove themselves the better man.

Check out the ‘Super’ rear-naked choke finish in ‘Sac Town’

Gall wasted little time in pressuring his opponent and landing a double-leg along the fence. Northcutt tried to play rubber guard, but Gall jammed him into the fence and passed into side control.

After several minutes of control, Gall jumped on a guillotine but failed to land it. The two began to talk shit back on their feet with Northcutt landing some nice shots, but Gall landed another takedown. Gall scored some hard ground strikes before the bell, sealing a solid round for the New Jersey grappler.

Northcutt came out quick to start the second round, landing some solid combinations and briefly dropping his opponent. However, Gall returned the favor just moments later, cracking the Karateka with a left hook that landed far harder than any punch prior.

Northcutt fell hard, and he tried to scramble into a double leg. Predictably, Gall immediately took the back, and it didn’t take long for the jiu-jitsu brown belt to land another rear naked choke.

This was a big win for Gall, who is now perfect (3-0) inside the Octagon with a trio of quick submissions. He announced that he intends to drop to Lightweight and called out Dan Hardy, which seems unlikely.

Either way, this bout showed off Gall’s strengths. He’s a reasonably effective — if not dominant — wrestler. On the mat, he’s very slick and is a serious threat. More than anything else, this bout proved that his boxing is an asset, as Gall landed some solid power punches en route to his win.

For a young prospect, that’s a solid mix of skills.

Northcutt’s biggest issue is that he made it to UFC way too early. Athletically, he’s phenomenal, and he definitely has skill in each area of the game, even if his kickboxing is definitely his strength.

The problem is that Northcutt’s weaknesses are obvious and many. He’s slick on the feet, but he’s definitely hittable. He can wrestle, but his shots are taken at bad times. Lastly, he has some offensive jiu-jitsu, but his defensive grappling is still far from UFC-ready.

Instead of being able to develop those talents on the regional scene, he’s been facing UFC fighters. They may not have been the best in the world, but his level of competition is far higher than a 20-year-old really needs to face at this point.

He’s having to learn under fire, and mistakes are rarely forgiven.

Last night, Mickey Gall dropped and choked Sage Northcutt in the second round. Is Gall a future contender?

For complete UFC on FOX 22: “VanZant vs Waterson” results and play-by-play, click HERE!