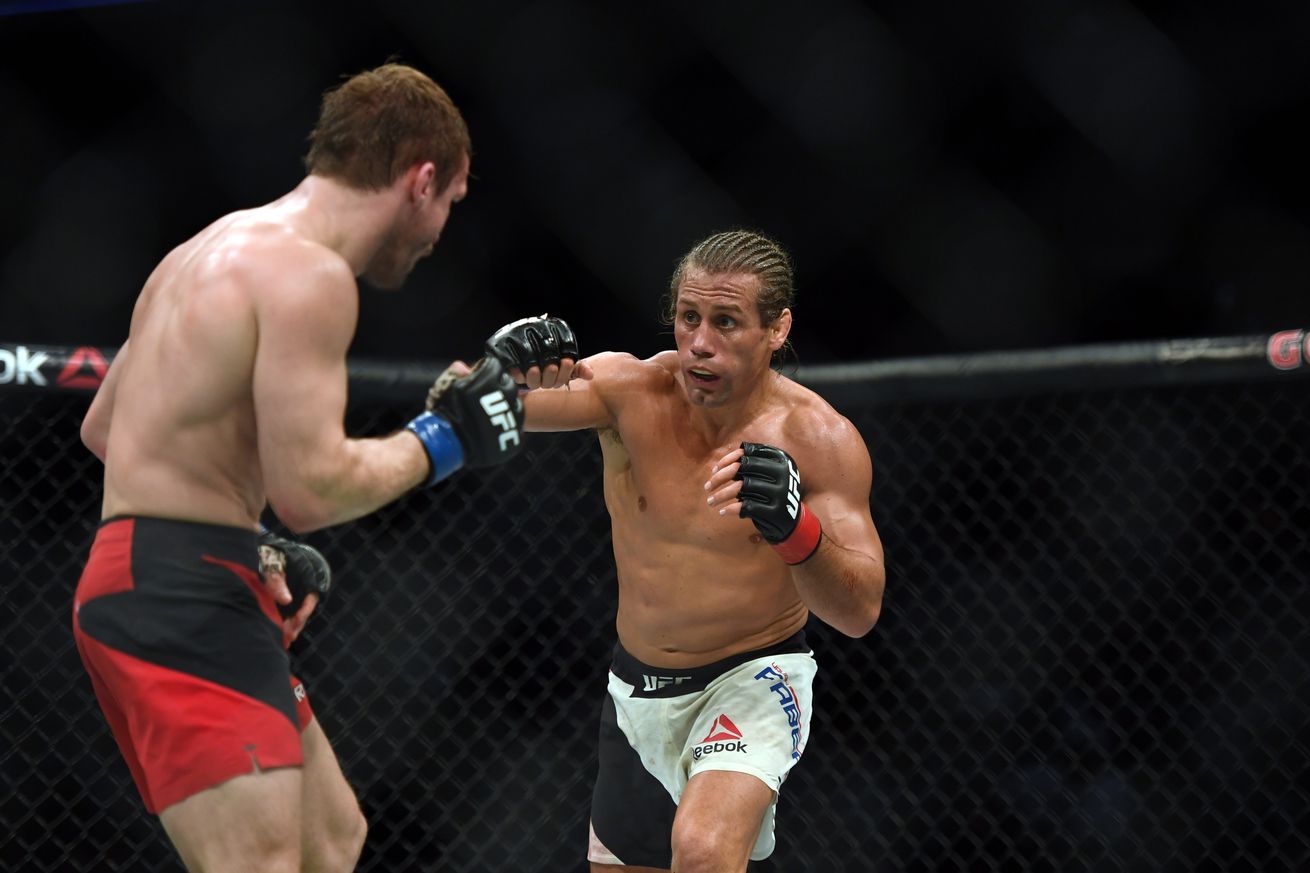 After a long and successful career, “California Kid” decided to hang up the gloves. However, he was far from intent on retiring on the heels of a couple losses, so a match up with a fellow OG in his home town sounded like the perfect ending to Faber’s life in the fight game. That said, Pickett did not sign the dotted line to give his opponent a proper send off. The Englishman desperately needed a victory himself, and he came to throw down opposite the crowd favorite.

‘California Kid’ Rides Off Into The Sunset On A High Note

To begin the bout, Faber looked to maintain his distance and snipe, whereas Pickett worked his usual rolling combinations and added some low kicks to his attack. For several minutes, Faber was getting the better of the exchanges, but neither man had really taken control.

Then, a brief clinch allowed Faber to score with a massive left hook, which knocked Pickett flat.

Faber jumped on him, and it’s a credit to Pickett’s toughness that he somehow wasn’t finished. For the remainder of the round, Faber smashed his opponent with ground strikes and hunted for the rear naked choke.

Pickett survived the round, but his face was destroyed.

To start the second round, the damage had clearly taken a toll on Pickett, who was moving much slower. Because of that, Faber was able to stab at him with jabs and right hands, landing the better strikes. Faber found success with his wrestling as well. He went to the single leg a couple of times and tripped Pickett to the mat. Once again, Faber hunted for his guillotine — and the crowd roared at even a brief front headlock — but Pickett defended himself well.

He didn’t accomplish much else, though.

The third was really more of the same. Faber continued to mark his opponent up with strikes and avoided most of his opponents punches. Plus, the takedown was there when he really needed it. All in all, “California Kid” had his way with Pickett, as “One Punch” was never able to land any sort of fight-changing blow. That said, he was able to resist a fair amount of submission attempts.

It was a dominant performance for the former WEC kingpin.

A finish would’ve been nice, but this is nevertheless an ideal result for Faber. In front of his biggest supporters, Faber displayed every part of his game en route to a quality win.

Faber will be remembered for many things, from creating Team Alpha Male to developing Sacramento as a hotbed for mixed martial arts (MMA). It’s fitting that he was able to retire on his home turf on a card headlined by one of his protégés, as the whole event stood as a symbol for Faber’s success.

Getting the win was just a cherry on top.

Unfortunately for Pickett, someone had to lose to Faber in his retirement bout. Pickett swung hard, but he never managed to generate any consistent offense or really hurt his opponent.

Simply put, he was picked apart and out-wrestled.

Moving forward, Pickett should be close to his own retirement. His durability has taken a dip, and he’s definitely a notch slower than a few years ago. Ideally, a match up with fellow WEC veteran Takeya Mizugaki would serve as a great career-ender for both athletes.

Last night, Urijah Faber put on a show in front of his hometown crowd. Here’s to wishing “The California Kid” a happy life after MMA!

For complete UFC on FOX 22: “VanZant vs Waterson” results and play-by-play, click HERE!