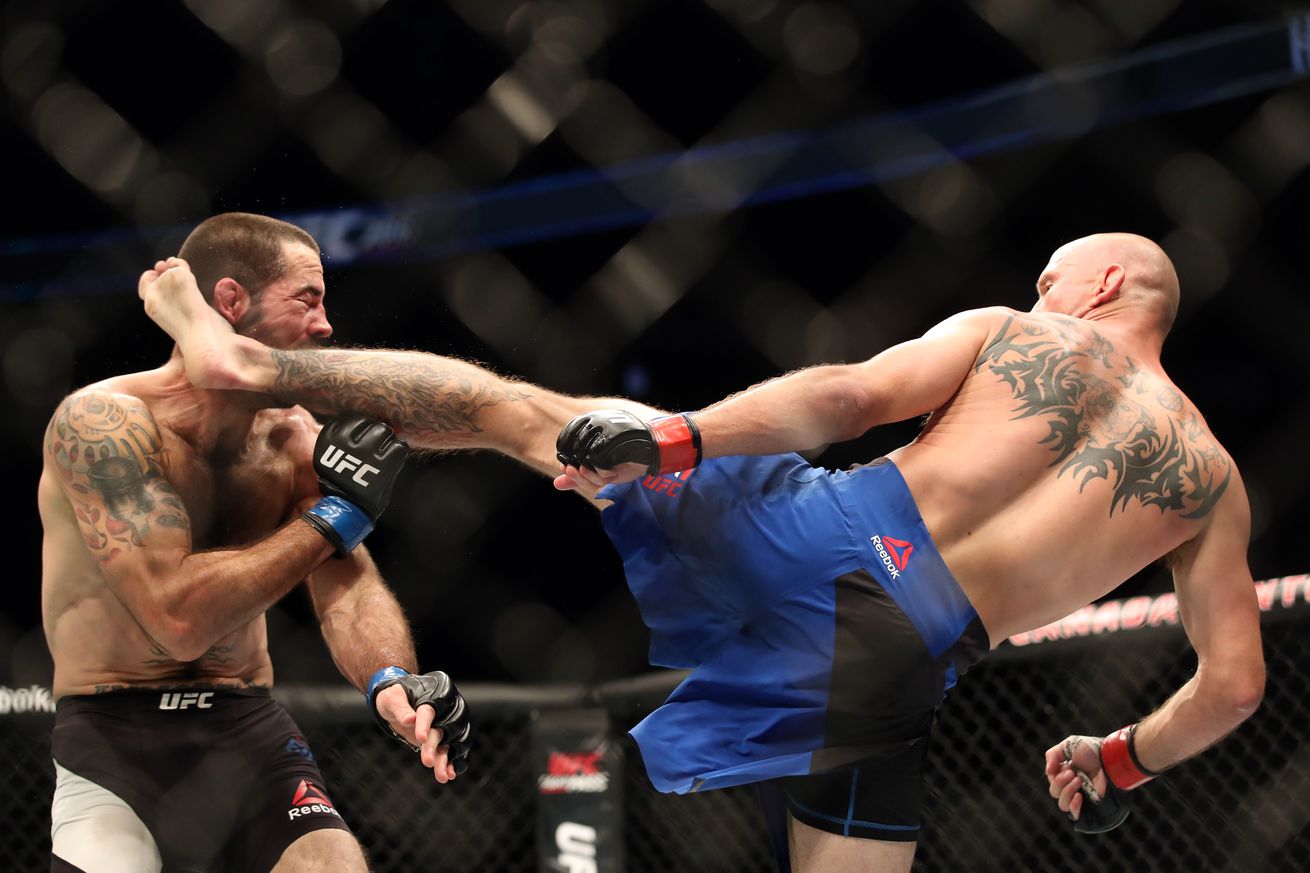 Cerrone has simply never looked better than his current 170-pound run. “Cowboy” is firing on all cylinders, looking sharper than ever on his feet and securing four straight stoppage victories. He’s closing in on a title shot, and it’s becoming hard to deny him. As for Masvidal, his jump in weight class has yet to produce such electric results, but “Gamebred” has nevertheless been scrapping with the best. The man hasn’t lost a fight clearly (i.e. not via split decision) in about four years now, and Masvidal could make his own jump into contention by toppling “Cowboy.”

In a match up of former Lightweights, both size and conditioning are likely to be similar.

Opposite Masvidal, Cerrone will want this battle to take place at his range. Both men are quite well-rounded and ready to battle in all areas, but where Masvidal prefers to slip into the pocket and box, Cerrone does his best work kick fighters from the outside.

Even with the improvement to his boxing skill, that range favors Masvidal. Luckily, Cerrone’s potent blend of snap kicks, intercepting knees, and even reactive takedowns have made pressuring him a hugely difficult task. Furthermore, Cerrone’s penchant for high kicks should really help limit Masvidal’s head movement, allowing Cerrone to punch with more accuracy.

Jorge Masvidal
Record: 31-11
Key Wins: Jake Ellenberger (TUF 24 Finale), Cezar Ferreira (TUF 21 Finale), Tim Means (UFC on FOX 7), James Krause (UFC 178)
Key Losses: Lorenz Larkin (UFC Fight Night 88), Benson Henderson (UFC Fight Night 79)
Keys to Victory: Masvidal possesses the skill set of a truly elite fighter, one able to defeat just about anyone on any given night. While he’s been plagued with a bit too much patience inside the Octagon, his last match up showed improvement, as Masvidal walked down and mauled his opponent with a surprising level of aggression.

That should be the plan here.

Masvidal’s reasoning for moving up to 170 pounds was so that he could avoid coasting and worrying about his conditioning. If ever there was a fight to push the pace, it’s this one, as Masvidal possesses the tools to hurt his opponent and could really change his place in the division with a victory.

It’s important that Masvidal does not attempt to rush into boxing range. He’s a very competent striker from the outside, notably with his jab and body kick. Both strikes should work well opposite “Cowboy,” meaning Masvidal can wait to find an opening inside rather than try to push through snap kicks. Once in boxing range, Masvidal’s sharper boxing should prevail more often than not, particularly in combination. In addition, Masvidal loves the left hook to the body, which could be a killer weapon opposite Cerrone, who has been finished by body shots in the past.

Bottom Line: This is an awesome contest of skilled veterans still in the primes of their careers. It should be a really great fight.

If Cerrone can extend his winning ways to five fights in a row, he’s on the verge of earning a title shot. Demian Maia still has the stronger case, but it could set up a match with the Brazilian, or a potential title eliminator opposite former champion Robbie Lawler. On the other hand, a loss sets Cerrone back quite a bit, as Masvidal is not yet a top contender at 170 lbs. He fights often enough that he could rebuild momentum, but it will take a couple quality wins.

As for Masvidal, this is historically the type of foe that causes him to come up short via split decision. If he can buck that trend and end Cerrone’s streak, it will instead earn him a position inside the Top 10, and Masvidal will suddenly be relevant in the Welterweight title picture. Alternatively, a competitive loss here will likely see Masvidal receive a step back in competition, which will lead to Masvidal dominating and looking great, thus restarting this whole process and summarizing his recent UFC stretch.

At UFC on FOX 23, Donald Cerrone and Jorge Masvidal will throw down. Which man will leave the Octagon with a victory?