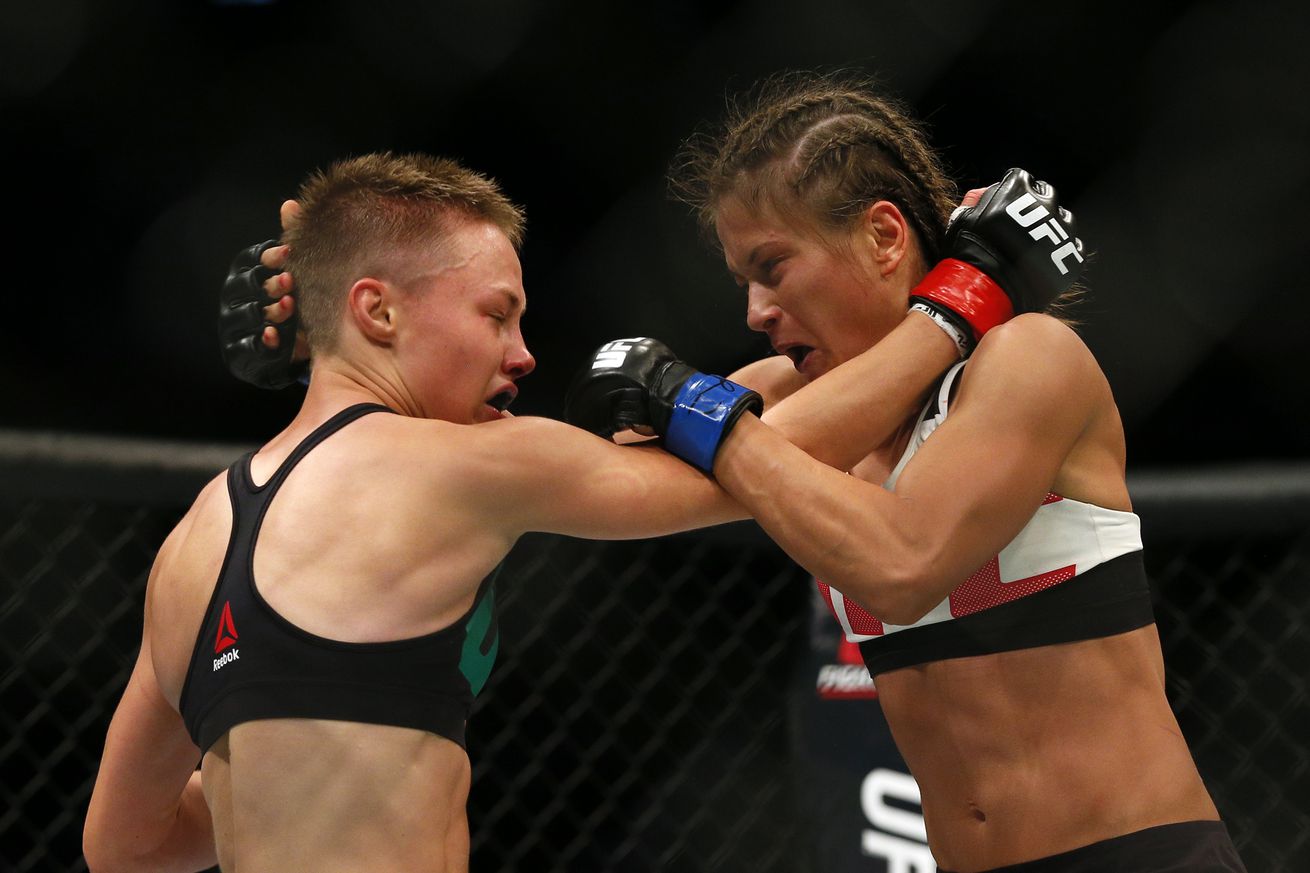 At 24 years old, Namajunas has already challenged for the title and is proven as a top contender. Though she came up short in her last fight via split decision, Namajunas is once again ready to push toward a showdown with Joanna Jedrzejczyk, making this a pivotal match for her. On the other hand, few knew exactly what to expect from Waterson. The former Invicta FC Atomweight champion did not have any particularly great wins at 115 pounds, but she’s impressed with consecutive finishes in her first pair of UFC bouts.

Let’s take a look at the keys to victory for both women:

Overall, the two fighters are pretty similar. They strike well from the outside, but they can be bullied in close. On the mat, they’re skilled at finding the submission while also being vulnerable to getting controlled. Perhaps the biggest differentiating factor is size. Namajunas is a full-sized Strawweight with a considerable reach advantage, and she should be able to use that to shift the odds in her favor.

From the outside, Namajunas works straight punches very well. If she can stab at Waterson’s nose and work some kicks from far out, it will put some pressure on “Karate Hottie” to close the distance. She undoubtedly will try, but Namajunas lands her best takedowns with reactive shots. On the mat, her size advantage will be even more noticeable.

Michelle Waterson
Record: 14-4
Key Wins: Paige VanZant (UFC on FOX 22), Jessica Penne (Invicta FC 5), Angela Magana (TUF 22 Finale), Yasuko Tamada (Invicta FC 8)
Key Losses: Herica Tiburcio (Invicta FC 10)
Keys to Victory: Despite her “Karate” moniker, nine of Waterson’s victories came via tapout. She has some flashy kicks and solid hands, but Waterson does a lot of work in the clinch, where her trips and throws are quite slick.

In this bout, Waterson will have a hard time unless she changes her strategy. She’s not likely to out-work her rangy opponent at distance, and shooting from that distance will not work either. Instead, Waterson will have to flip the playbook and look to close distance into the clinch. If she’s able to close range, she’ll have an easier time landing shots, and there’s always the chance an opening for a big toss will arise.

Additionally, being that close will tempt Namajunas to transition into takedowns. So long as Waterson isn’t caught off guard, she should be able to defend the average shot from Namajunas. Plus, the young athlete has a bad habit of continuing to work for the takedown even after her shot is not working, which is an exhausting strategy.

Bottom Line: The winner of this fight will very likely receive a title shot.

Namajunas nearly earned a title shot in her last fight, but she came up short. Normally, that’s a bigger setback than just one win can recover, but there are very few contenders left at Strawweight. If Jedrzejczyk manages to defend her title once more opposite Jessica Andrade, there’s no one left to face her aside from the winner of this match.

A second loss in a row would definitely hurt Namajunas’ standing. She wouldn’t drop out of the top five, but “Thug Rose” would have to put some wins together before looking to contend again.

The situation for Waterson is pretty much the same. If she wins, she’s won three in a row and defeated a top five opponent. Alongside her prior championship experience, that makes her a very deserving title contender. If Waterson comes up short, her performance will very much dictate where she goes from here. If it’s a close loss, she’s still close to earn a shot. However, if she appears out of her element opposite an elite Strawweight, she may have a tough time earning such big fights moving forward.

At UFC on FOX 24, Rose Namajunas and Michelle Waterson will battle over a title shot. Which woman will earn a shot at gold?