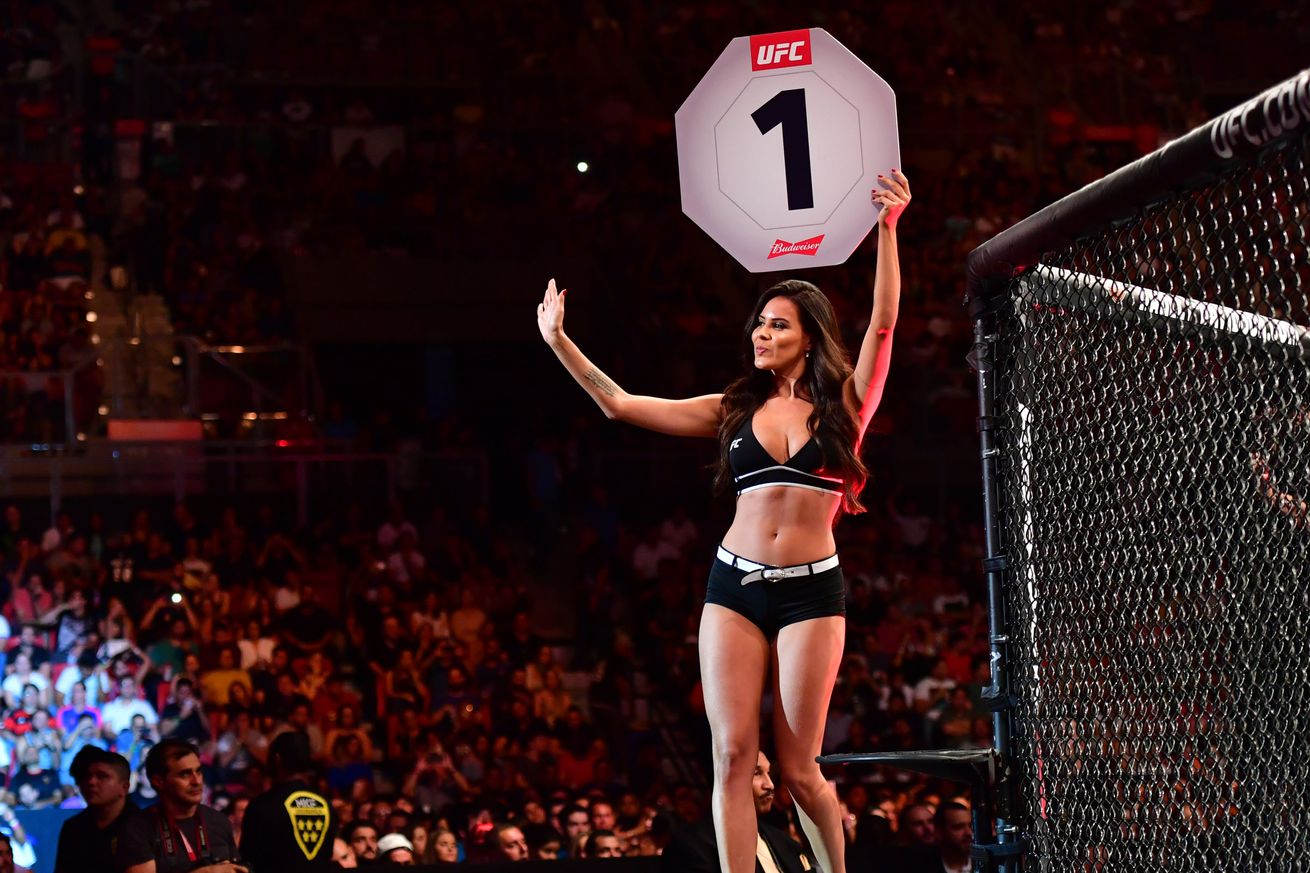 Ultimate Fighting Championship (UFC) is bringing a bevy of “Prelims” fights to both UFC Fight Pass and FOX this weekend (Sat., April 15, 2017) when UFC on FOX 24: “Johnson vs. Reis” storms Sprint Center in Kansas City, Missouri. MMAmania.com’s Patrick Stumberg kicks off the UFC on FOX 24 “Prelims” party with the first installment of a two-part undercard preview series below.

The best fighter on the planet has a chance to make history this Saturday evening (April 15, 2017) as Demetrious Johnson makes the tenth defense of his Ultimate Fighting Championship (UFC) Flyweight title against Brazilian jiu-jitsu ace Wilson Reis in UFC on FOX 24’s main event. UFC on FOX 24, which takes place inside Sprint Center in Kansas City, Mo., will also features a women’s Strawweight clash between Rose Namajunas and Michelle Waterson with major title implications.

UFC of FOX 24 also boasts nine “Prelims” undercard matches to set the stage, five of which will stream online via Fight Pass. Let’s check out the afternoon line up:

Like so many of his “Lookin’ for a Fight” compatriots, Devin Clark (7-1) stumbled out of UFC’s gate with a knockout loss to Alex Nicholson in July 2016. Returning to Light Heavyweight, he took on The Ultimate Fighter (TUF) 23 veteran Josh Stansbury and soundly outworked him for a decision win.

In addition to his four professional stoppages, Clark went 5-0 (5 KO) as an amateur.

Jake Collier (10-3) earned seven finishes in his first nine fights — six of them in the first round — to earn a shot in the world’s largest fight promotion. “The Prototype” has since gone 2-2, alternating losses and wins, and most recently knocked out Brazilian grinder Alberto “Uda” at UFC Fight Night 88.

This will be his first fight in almost 11 months.

With all due respect to Collier, this is a showcase fight for Clark. Collier has spent his entire UFC career at Middleweight and looked decidedly mediocre there, while Clark is easily at or above the level of Vitor Miranda or Dongi Yang, both of whom knocked Collier silly.

It’s an awful stylistic match up for Collier as well, since he’ll likely struggle to get the takedown and has few answers for Clark’s boxing on the feet. Expect “Brown Bear” to dominate wherever the fight goes. The only real question is whether he’ll get the finish.

Seven consecutive wins, including a revenge knockout of Josh Neer, brought Anthony Smith (26-12) back to UFC after his initial winless (0-2) run. “Lionheart” has done much better this time around, going 2-1 so far and recently obliterating Elvis Mutapcic in a bonus-winning effort.

All but three of his wins have come by knockout or submission.

Andrew Sanchez (9-2) carried Team Claudia Gadelha’s flag all the way to TUF 23 Finale, where he dominated Khalil Rountree for a unanimous decision win. He then took on gritty veteran Trevor Smith and took home a decision for his fourth consecutive professional win.

He will give up three inches of height to the 6’4” Smith.

Smith honestly looks like he’s still improving after nearly 40 professional fights. His striking looked sharper than ever against Mutapcic and he proved that he can fight through early adversity. That said, his takedown defense failed him badly against Cezar “Mutante” and Sanchez is a very effective grappler.

That might be all it takes to decide it. Smith’s go-for-broke bruising lends itself to exploitation by heavy hitters and opportunistic takedown artists, both roles that Sanchez can comfortably fill. Expect “El Dirte” to disrupt his rhythm and drain his gas tank with regular takedowns, ultimately pounding him out midway through.

Aljamain Sterling (12-2) staked his claim as one of the Bantamweight division’s best prospects with four straight UFC wins, including impressive submissions of Takeya Mizugaki and Johnny Eduardo. Unfortunately, “The Funkmaster” will enter Saturday night’s fight on the heels of split decision losses to Bryan Caraway and Raphael Assuncao.

He will have a six-inch reach advantage come fight night.

Augusto Mendes’ (6-1) impeccable Brazilian jiu-jitsu credentials weren’t enough to save him in his late-notice UFC debut against Cody Garbrandt. They weren’t much needed in his next bout, which saw him outstrike gritty veteran Frankie Saenz for a Fight of the Night-winning split decision.

“Tanquinho” owns four wins by submission and one by (technical) knockout.

Sterling has to win this decisively. His prowess on the ground is unquestionable, but his heart and cardio looked shaky against Caraway and the Assuncao was just a stinker all around. Mendes’ ground game is enough of a deterrent to force Sterling to strike and “Tanquinho” is plenty dangerous there.

Still, I do think Sterling can win this. Even if he doesn’t engage on the ground, he can keep Mendes on his toes with occasional takedowns and his long-range kicking ought to pay dividends against the Brazilian’s straightforward onslaught. I could see this going either way, but I’m leaning toward Sterling’s length and experience.

Though he fell short on TUF 17, Zak Cummings (20-5) quickly carved out a place for himself in UFC’s Welterweight division with five wins in seven fights. Most recently, he bounced back from a decision loss to Santiago Ponzinibbio with an impressive straight armbar against Russian veteran Alexander Yakovlev.

He has submitted ten professional opponents and knocked out another five.

Nathan Coy (15-6) lost his first fight in TUF 21’s house, but came up big with a clutch decision over Valdir Araujo for 100 points. He’s gone 1-1 in UFC proper, falling to Danny Roberts before taking a decision over Jonavin Webb in Feb. 2016.

He will give up two inches of height to the 6’0” Cummings.

I just don’t think Coy has enough left in the tank at this point. He’s pushing 40 and was soundly finished in two of his last three pro fights. Add the layoff and Cummings’ sheer size and you have a recipe for disaster.

Coy might be able to grind his way to a decision, but Cummings’ strength, superior striking and sneaky submissions present the sort of physically taxing challenge that Coy’s no longer equipped to handle. Cummings rocks him early and proceeds to tap him.

Ashlee Evans-Smith (5-1) suffered the first loss of her professional career in her UFC debut when Raquel Pennington put her to sleep with a vicious bulldog choke. She scraped past Marion Reneau in her next fight, then pounded out Venezuelan prospect Veronica Macedo for her first stoppage win since 2014.

Three of her five wins have come by form of knockout.

Ketlen Vieira (7-0) opened her professional career with five consecutive finishes, three of them in the first round. In her Octagon debut, she leaned on her wrestling to take a competitive decision over Kelly Faszholz at UFC Fight Night 96.

She owns three wins by submission and two via (technical) knockout.

Evans-Smith remains fairly one-dimensional, but that dimension is perfect for Vieira. The Brazilian lacks the striking nuance to overpower Evans-Smith on the feet and, as the less-credentialed wrestler, will run into trouble if she tries to repeat her efforts against Faszholz.

Though Evans-Smith won’t be a title challenger until she can put together a competent striking game and blend it with her takedowns, fighting her demands takedown defense that I’m not sure Vieira possesses. Evans-Smith stops her late.

Four more UFC on FOX 24 undercard matches to preview and tomorrow, including the Octagon debut of the man who might be the best prospect on the planet. Same time as always, Maniacs!

Remember that MMAmania.com will deliver LIVE round-by-round, blow-by-blow coverage of the entire UFC on FOX 24 fight card, starting with the Fight Pass “Prelims” matches online, which are scheduled to begin at 4 p.m. ET, and then the remaining undercard balance on FOX at 6 p.m. ET, before the FOX main card start time at 8 p.m. ET on PPV.