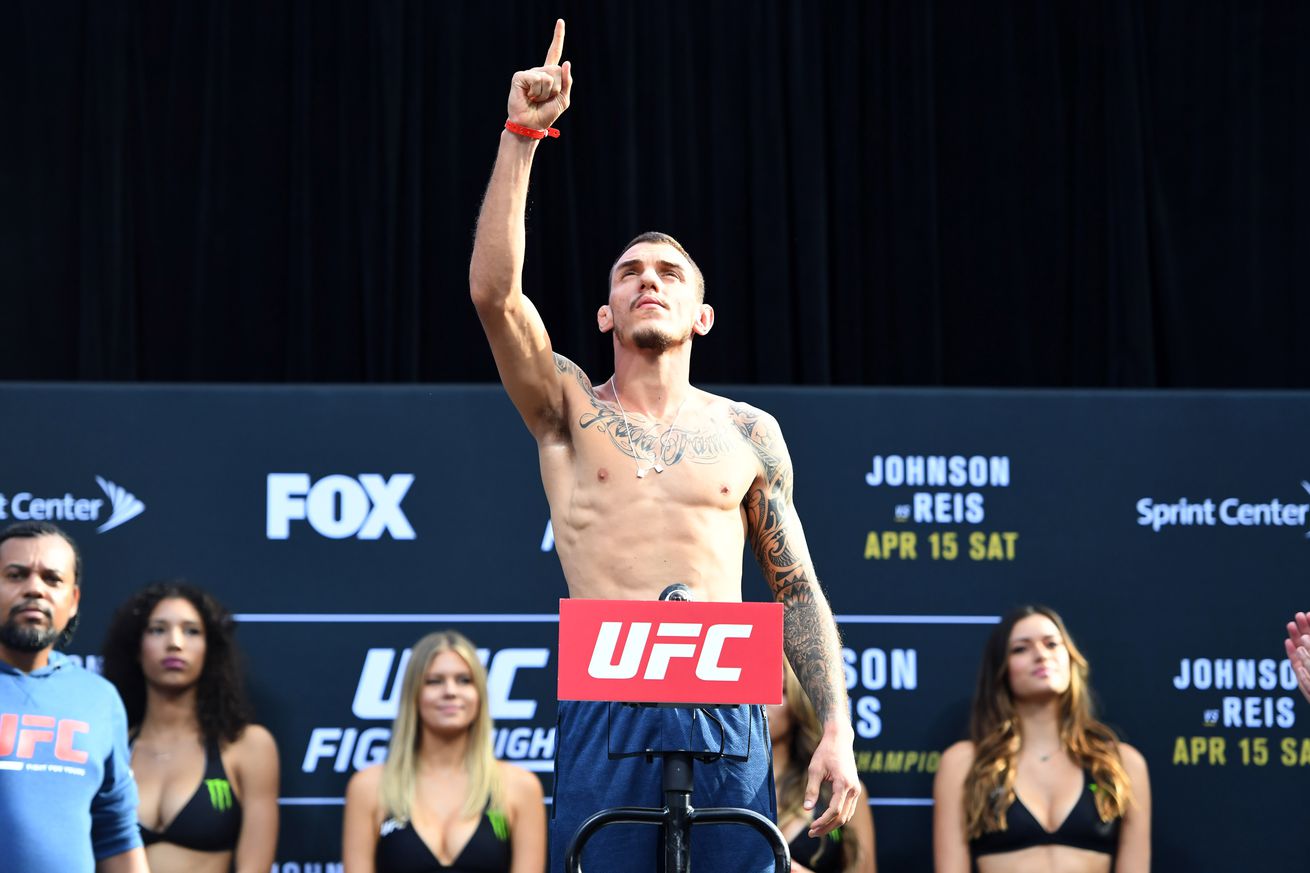 Featherweights Jeremy Stephens and Renato Moicano faced off in the main card opener of UFC on FOX 24: “Johnson vs. Reis,” which took place inside Sprint Center in Kansas City, Mo., tonight (Sat., April 15, 2017).

The fight featured as a bounce-back fight for Stephens, who was coming off a tough three-round decision loss to Frankie Edgar. For the undefeated Moicano, this was his chance to leap into the rankings over a veteran opponent.

They came out swinging, Stephens throwing a one-two combination that came up short. Moicano spun for a back kick. Moicano landed a couple leg kicks as Stephens looked to pressure. Moicano hit a body kick, then a leg kick. Stephens whiffed a head kick. Moicano was doing a good job not being there for Stephens’ hands. Stephens tried to pin him down, lunging in with a leaping left hook that falls just short. Stephens used an inside leg kick to cut down Moicano’s movement and land a right hand. They traded jabs. Stephens ate another leg kick, looked to step in for an elbow, and Moicano ducked under for an easy takedown. On his back, Stephens looked for a kimura from half guard. An unlikely submission, it did lock down Moicano and prevent him from landing significant ground and pound. Stephens held the kimura until the end of the round.

Stephens looked for that inside low kick to one-two that he had success with in the first. Moicano landed a hard right hand over the top in an exchange. Stephens backed him up with big swings and Moicano clinched and moved away. Stephens ran in with a low kick. They traded jabs. Stephens alternated between probing jabs and hard leg kicks. He was having more success getting Moicano to the fence and landing a better mixture of offense. He landed another low kick. Moicano hit a one-two as a leg kick counter. Moicano turned the corner and escaped from the fence and the crowd began to boo. Stephens countered a jab with a right hand. Stephens stepped in with a combination. Moicano lands a nice jab. Stephens landed a switch body kick. Moicano’s circling angered the crowd again as the round came to an end.

With the first two rounds likely split between them on the scorecards, both fighters came out with urgency. Moicano got into the clinch from an exchange and took Stephens down. Stephens turned into Moicano and managed to get back to his feet, eating a right hand on the way up. Moicano’s movement had frustrated Stephens for long stretches of the fight, and Stephens was still struggling to pin down the wily Brazilian in the third. His best moments came as he used a jab and kicks to pin Moicano down. Moicano snapped out a nice jab. He clinched as Stephens closed the distance, then circled out. Moicano landed several leg kicks, buckling Stephens’ leg. Stephens got inside for a moment and looked for elbows from the clinch, then circled out. His determination to not exchange with Jeremy once again brought the disdain of the crowd. Stephens missed on an uppercut but landed a right hand. Stephens landed another right on a back-peddling Moicano, then landed a full combination to low kick. Moicano caught him with a right hand in the exchange. As the round ticks away, they trade shots, Stephens connecting with two punches and then eating a hard counter as the bell sounds.

The judges see it Moicano’s way, and the undefeated Brazilian will likely debut in the official UFC rankings after this … his highest profile win to date over a Top 5-ranked opponent.