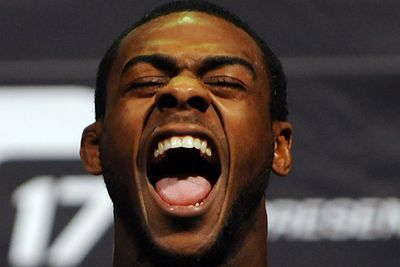 “I’m excited with this opportunity to fight another top 10. He’s a good fighter, but his best part is his mouth. He talks a lot. He knows how to sell and promote a fight, different than other fighters. He’s doing it in a way that isn’t pleasant. He’s trying to get inside my head, attacking me with insane attitudes. We try to sell a fight, but always in a polite way. We have to respect our opponents. He’s just getting me more and more excited to go there and break his jaw, like I did with Eddie Wineland. Everything he says is funny to me. We can see when a fighter is scared of the other. It’s clear in the fight. He’s showing how scared and nervous he is, how insecure he is, and is trying to get inside my head.”

Sounds like Aljamain Sterling is going to suffer the first loss of his combat sports career after Johnny Eduardo breaks his jaw at the UFC Fight Night 80 mixed martial arts (MMA) event, which takes place later tonight (Thurs., Dec. 10, 2015) inside Chelsea at Cosmopolitan in Las Vegas, Nevada. The Brazilian already sent one fighter to the ….View original article