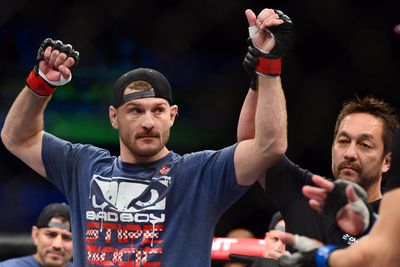 “I’m not involved in their decision-making process. My camp notified the UFC that I would be healthy and ready to fight in January against Ben or Andrei. They chose to match me against Andrei and I accepted. My goal is to face the highest ranked fighter available who will help me get a title shot. I would have been fine fighting Ben in January but that fight was not offered to me, Arlovski was. He is ranked higher and we took the fight.”

— While it won’t be much compensation for Ben Rothwell, Stipe Miocic wants to make it very clear that he isn’t running from a fight against “Big Ben,” as he revealed to MMA Latest News (via Bloody Elbow) that despite willing to re-schedule, UFC matchmakers never offered him a rematch against Rothwell. All that was on the table was a fight against Andrei Arlovski, which he accepted for UFC 195 on Jan. 2, 2016 in Las Vegas, Nevada. It’s a fight Rothwell himself was lobbying for. Miocic and Rothwell were set to throw down at last weekend’s (Oct. 24, 2015) UFC Fight Night 76 event in Dublin, Ireland, however, an injury to Stipe