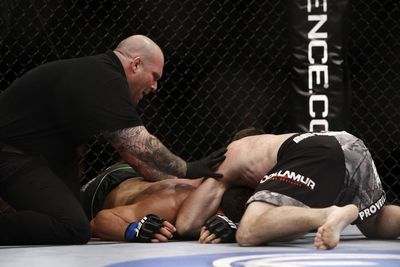 Long-time mixed martial arts (MMA) referee Josh Rosenthal — who was a fixture under the Ultimate Fighting Championship (UFC) banner — was sentenced to 37 months behind bars with no possibility for parole in July 2013 by the U.S. District Court in Oakland, California.

Rosenthal plead guilty to conspiracy to manufacture and distribute marijuana, as well as possession with intent to distribute after federal agents found him running a weed warehouse in “O-Town” with 1,356 marijuana plants (details).

The estimated street value was … get ready for it … a whopping $6 million.

But, after serving 18 months in Read More