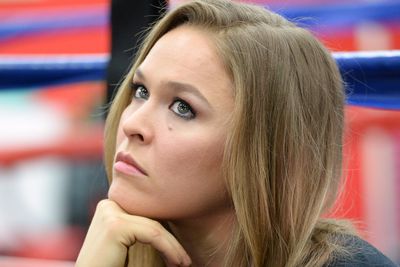 While I doubt Bruce Buffer is taking anything away from Holly Holm’s memorable knockout performance against Ronda Rousey a few weeks ago at UFC 193 in Melbourne, Australia, the voice of the Octagon thinks “Rowdy” may be been distracted.

Distractions that came courtesy of the bright lights of Hollywood, as well as the rest of her obligations outside of the cage.

He broke it down to TMZ:

“Ronda fought three times this year, if I’m not mistaken, made two movies, booked for two more, did more publicity in the last four or five months since her book was released — which is still number one on the charts — than most major movie stars releasing motion pictures. This girl didn’t have a full plate, this girl had a full table. I think it would affect anybody because you are not focusing on the job at hand as much as you would if that’s all you had to focus on. She, again, is an amazing talent so I don’t question her, I support her and I think she is going to come back like an incredible beast. I’m sure that if Ronda could take time off, go to the gym and train ….View original article