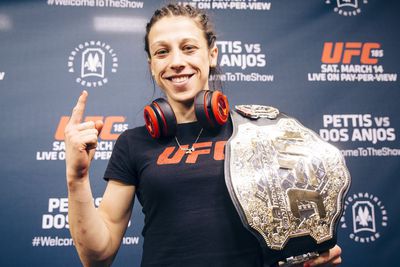 It’s been a hell of a year for UFC strawweight Joanna Jedrzejczyk, who on this date last year was known only for having defeated Juliana Lima by decision at UFC on Fox: Lawler vs. Brown.

Fast forward to Nov. 28, 2015 and Jedrzejczyk has won four fights since, including the UFC strawweight belt and defended it twice. Needless to say, she has invigorated interest in Polish MMA like no fighter before her.

Now, the tiny but terrific fighter has joined some rarified company in a list of 20 of Poland’s most famous athletes for the distinction of Sport and Polish Television’s (TVP) review of the country’s 10 best athletes (link is in Polish).

While it’s inconceivable that Jedrzejczyk will top footballer (soccer player) Robert Lewandowski on that list, it’s quite remarkable to see how rapid her rise to stardom has been.

Her profile on the voting plebiscite:

28-year-old fighter from Olsztyn, club colleague of Mamed Khalidov, she is the first representative of mixed martial arts (MMA), which was nominated in the Plebiscite Review of Sport and Polish Television. Six-time world champion in Thai boxing since 2012 and competitor in professional MMA. Last summer she made her debut in the octagonal cage of Ultimate ….View original article